NEW YORK — DKNY on Thursday night was packed with bikers, chicks and art fans for the kickoff of “Madison Avenue: Where Art Meets Fashion.” But the bikers were a tame bunch, having ridden in on Vespas rather than Harley- Davidsons;...

By Sharon Edelson on May 2, 2005
View Slideshow 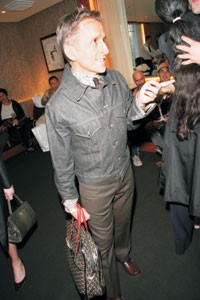 NEW YORK — DKNY on Thursday night was packed with bikers, chicks and art fans for the kickoff of “Madison Avenue: Where Art Meets Fashion.” But the bikers were a tame bunch, having ridden in on Vespas rather than Harley- Davidsons; DKNY cosponsored the third annual Gotham Scooter Rally that evening.

Art Meets Fashion, which benefits the Whitney Museum of American Art’s Family Programs, is supported by American Express and runs through May 14. It’s organized by the Madison Avenue Business Improvement District. DKNY displayed photographs by Sebastian Kim, who chronicles the underground scooter scene. “This is a very eclectic crowd,” a spokeswoman said. “It’s people who haven’t been to the store.”

Karan, whose late husband, Stephen Weiss, was a motorcycle enthusiast, wants to learn how to ride herself. “Can you imagine?” said the spokeswoman, “after she broke two knees skiing!”

Across the street at Barneys New York, the ninth floor was jumping with fans of Isabel and Ruben Toledo, whose work decorated the space. Adam Weinberg, director of the Whitney, said, “The energy is really great. I love the shift in music from place to place.”

Brendon Cass’ large-scale canvases gave the monochromatic Calvin Klein store a shot of color. Cass, who painted impressionistic scenes of New York in Klein’s Madison Avenue windows, said, “It’s interesting to view paintings as temporary and not always precious. These are meant to be more like poetic suggestions.”

Sophie Matisse’s paintings suggest the work of famous artists. Matisse, who is Henri Matisse’s great-granddaughter, takes well-known paintings and removes one element. Her version of Vermeer’s “Woman With a Pearl Necklace,” sans the necklace, took on a sense of irony amid all the jewels at David Yurman. “This is the biggest turnout we’ve ever had and the friendliest,” Yurman said. “We sold a few big pieces tonight.”

Space was tight at Yurman’s, but not as tight as at Yves Saint Laurent, where Sylvie Fleury’s art and the cachet of an invitation-only party created a frenzy at the door.

At Ralph Lauren, guests drank Grey Goose Coolers made with lemonade and admired the merchandise as if it were fine art. The designer didn’t look far to find an artist. Bruce Weber, who photographs Lauren’s ad campaigns, supplied portraits, which looked like they were part of the Rhinelander Mansion’s permanent decor.