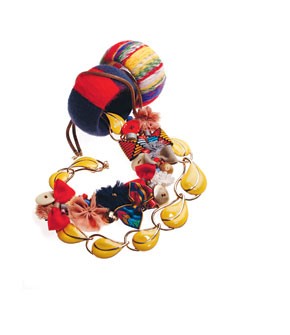 With their eye-popping colors and vintage vibe, the latest costume jewelry offerings look as if they could have been plucked from a neighborhood street fair. But these accessories, some by a fresh crew of designers, are getting serious fashion play, from the runways to the retailers to “It” girls about town.

Book editor, industrial designer, sculptor, fashion-show producer and publicist. The previous careers of some of the industry’s most innovative up-and-coming costume jewelers might not seem to have much in common, but there’s no mistaking the artsy street cred each brings to his or her new venture. From wood and feather-festooned earrings to necklaces of chiffon rosettes to silver cocktail rings bedecked with teeny-tiny plastic platters of fruit tarts, the new costume pieces being snapped up by retailers have a fresh whimsy, and usually occupy a more affordable niche in the ever-expanding jewelry market.

“In the same way that clothes should be comfortable and let you move around, jewelry should also be casual and fun,” says designer Elizabeth Yarborough, 28, who left her job as an editor at HarperCollins two years ago to start Yarborough Jewelry, a line of necklaces, cocktail rings and knit and cashmere-wrapped bangles possessed of a humorous charm — e.g., food-platter knuckle-dusters. “I want my pieces to engage with the wearer, really get incorporated into daily life.” Like many of her industry counterparts, Yarborough, whose pieces wholesale from $22 to $260 and are currently sold via four Web sites and at 16 stores worldwide, hit upon costume jewelry design as an outlet for an overflow of creative impulses. (“I was the type of kid who took Christmas ornaments and strung them from my ears.”) The craft itself is also accessible to new designers looking for a business with relatively low overhead, since found and sourced materials such as wool, leather, brass and ribbon replace the more expensive elements of fine jewelry. The final product isn’t always so easy on the wallet: Subversive Jewelry’s Justin Giunta, who was nominated in 2007 for a CFDA Swarovski Award for Accessory Design and has done runway jewelry for Chris Benz and Trovata, recently added one-of-a-kind pieces of silk and cotton fabric piled with quartz, turquoise, glass pearls and Lucite acrylic beads to his lineup of coveted layered necklaces and bracelets. The new cloth, armor-esque creations retail for between $15,000 and $22,000 apiece, while the regular Subversive collection pieces wholesale from $180 to $1,280. “I took the concept of jewelry added to clothes and flipped it, putting the clothes into the jewelry,” says Giunta, 28, a former painter and industrial designer whose current status as a fashion darling was cemented by a collaboration with Target that began in March. “The concept of the design is more valuable than the sum of the materials,” he adds. “And by lending my aesthetic to something like Target, I can maintain the integrity of my own line. I think what this type of jewelry is doing is challenging the established institutions, the preconceptions of what is beautiful. It doesn’t have to be all about precious materials.”

Florian Ladstätter, 41, the designer behind the European line Florian Jewelry, says that his collection, which grew out of his work as a furniture designer and video artist, has proven successful precisely because of its lack of gems and precious metals. “A 2-carat diamond on a white gold ring is a very clear statement, and a double wooden necklace from me does not say the same thing,” says Ladstätter, whose plastic, glass and crystal-beaded pieces wholesale for $70 to $300 and one-of-a-kind pieces for up to $1,000. Viennese jewelry designer Andreas Eberharter of AND_i, 37, who has worked as a goldsmith and sculptor, also eschews precious stones and metals, using sculptural techniques on aluminum, acrylic and glass to craft bracelets, necklaces and headpieces, which he sells on his Web site (and-i.net) and at the art galleries Julie 762 in New York and Artup in Vienna. Wholesale prices for the line range from $50 to $260. Even Nylon magazine style director Dani Stahl, 30, has gotten in on the act, designing four Red Carpet Collections a year — consisting of Eighties-inflected, Art Deco-style cocktail rings, earrings and necklaces — for direct-jewelry seller Lia Sophia, a collaboration that began in late 2004. “It’s a different buyer, someone interested in art and the crafts of things, I think,” says Ladstätter. “These kinds of pieces need a personality from the wearer that is more curious for something fresh, not too serious, but still chic.”

“There’s so much fun to be had, because you can do so much more in terms of exploring a piece when you don’t have to worry about diamonds and gold,” says Made Her Think’s Meredith Kahn, 30, a former Old Navy designer whose cuffs, rings and necklaces, featuring motifs such as skulls and birds, have been worn by the likes of Angelina Jolie, David Beckham and Kate Hudson. Kahn, who recently waded into the fine-jewelry waters with a commission-only series of 18-karat pink and white gold pieces, began her line with found objects — Lucite, resin and plastic items and vintage chains — then gradually expanded into using rhinestones and fabrics. Her costume jewelry ranges in price from $17 to $300 at wholesale. “You can be more playful, more tongue-in-cheek with these pieces,” she says, “but as I’ve grown up and come into my own, I’ve also been doing more architectural shapes, things that may be more abstract.” Following in Kahn’s footsteps are Celeste, 32, and Satu Greenberg, 36, who previously worked in fashion-show production and boutique sales, respectively, and whose Tuleste Market collection features thick brass and copper necklaces and bracelets plated in delicate gold and rose gold. Their offerings include a necklace of large hammered squares wholesaling for $90 and a necklace of heavy petals going for $48. The impetus for creating their stylish-yet-affordable pieces was simple, according to Celeste: “We had an eye for a collection that someone who doesn’t have a ton of money can buy, but someone who does have money will want because it looks so chic,” she says.

Although 2006 Duke grad Lizzie Fortunato, 23, who worked briefly as a fashion publicist and started Lizzie Fortunato Jewels with her twin sister and business partner, Kathryn, last year, had noticed the large numbers of elaborate costume pieces popping up on runways and in stores, it didn’t deter her from going into the business. “My sister keeps saying that the market is getting saturated, but this is what I’ve been doing for years — sewing, beading, searching for trinkets,” says Fortunato. Her collection, which includes beaded headbands, chiffon-rosette collar necklaces as well as chains of dangling vintage whalebone poker chips (which she stumbled upon in Uruguay), was showcased at a SoHo loft party hosted by Annabelle Dexter-Jones and Alexandra Richards late last month. The line, which wholesales from $30 to $250, has landed at a number of boutiques, among them Albertine in Manhattan and Stuart & Wright in Brooklyn, and it will be at Bergdorf Goodman beginning in mid-May. “It’s about feminizing a masculine look,” Fortunato says, “but also creating statement pieces that someone can wear to a big event and feel just as elegant as if they were wearing fancy stones.” And though the swift, ever-fickle tides of fashion have swept out many a jewelry line after just a few seasons, to hear these designers tell it, there are no shortages of creative juices — or, for that matter, ribbons, metal and buttons — to fuel costume-piece production. “In this city, everyone is kind of perched on the edge of their seats to see what is coming up next,” Yarborough says. “But I think that works in our favor, for this colorful, innovative style. There’s more freedom than ever to push the limits of what people want to wear.”