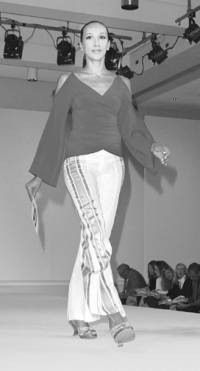 The postholiday assortment, always crucial for retailers, is especially important this year since the moleskin suede and peasant blouses currently in stores have failed to stimulate consumers. Makers and merchants are also leery about pressing their luck with denim, which many worry will be heaped in bargain-priced piles after the holiday.

“We’re up to our necks in denim. But retailers are afraid to lose it. It’s made so much money for them and they don’t know what’s next,” conceded Barry Balonick, president of Luna Chix. He and his sales team touted beachy, loose linen pants and banded blouses with side ties.

Despite buyer willingness to experiment, the overwhelming sentiment was uncertainty.

“[Vendors] are asking us what the next big thing is,” noted one unnerved buyer from a large West Coast chain, who asked not to be identified. “They should be telling us.”

There was no shortage of advice. Directives West buying office principals Sandy Richman and Sandy Potter offered their take on athletic and denim trends at their market kickoff runway presentation, while rival buying office Barbara Fields rewarded its retail clients with travel gift certificates for visiting trendy showrooms. The California Market Center gave buyers a dose of youth intelligence by bringing in celebrity stylist Stephanie Wolf to speak on the youth culture “icons” she wardrobes — like Avril Lavigne and Christina Aguilera — and inviting skate brand Gallaz to premiere its “AKA: Girl Skater” documentary in the Fashion Theater.

“If anyone says ‘peasant’ in my design room, they have to take the day off,” he mused. “We need a renaissance in this business.”

Aguirre called for “touches of Asian” including frog closures and kimono sleeves and military-inspired jackets and skirts in khaki and drab. The firm boosted its design staff, adding XOXO design veterans Peter Shen and Todd Cardenas to the roster.

“[The customer has] just about all she needs in denim,” noted Lisa Engelman, Paris Blues’ director of sales. “Every time we put something else [other than denim] on the floor, it flies.”

Shelley Epstein, sales manager for New York-based Junior Headquarters, Self Esteem’s denim licensee, admitted denim had been “a tough sell.” She planned to offer the details buyers liked from the line — fold-down waistbands, folk ribbon accents and butterfly embroidery — on twill and other fabrics.

Even if consumers still want peasant styles — and retailers concede some do — buyers have a bad case of burnout. When asked about the look, several responded by rolling their eyes.

Others, like Galen Kovash, a junior buyer for Rich’s/Lazarus/Goldsmith’s, a Federated Department Stores division, said he’s found ways to freshen the trend.

New York-based importer Pink Dot Girl saw the power of having the right blouse. By market’s second day, the firm had booked 37,000 units of a $9 wholesale Grecian chiffon blouse with long, body-wrapping ties, according to president Jack Freedman.

“We’re focusing on detailed, labor-intensive garments. The consumer perceives value in that,” he said, adding that it’s also one of the ways he can distinguish his merchandise from the equally low-priced offerings from competitors based here.

Despite a slow retail start and worries about merchandise stuck at the ports, sweater resources said they were holding up in bookings. Joseph Gutman, president of sales for New York-based Say What, predicted he would book roughly 500,000 units for a rayon poncho.

There was little talk about dresses, although they’ve historically been an Easter staple. Special-occasion gowns, however, saw some action. Blanca Farber and Helen Kharrat, buyers for the 33-unit Windsor chain, said they were moving away from traditional ballgowns to focus on sexier dresses with beading, godets (a series of triangle cuts) and trains.

“We’re also going for a higher price point and better fabrics,” Farber said, noting that the Vernon, Calif.-based retailer plans to begin carrying dresses between $250 and $400 retail in addition to its average $140 price point.

Activewear is still all about fleece and velour, according to Julie Rood, a buyer for six Lucy activewear stores out of Portland, Ore. But she said she was especially glad to find textured seamless performance gear as well as fabrics with better capability to wick away perspiration. “They’re doing it better and better all the time,” she said.

As for what the holidays will bring, September sales declines from the stars of the industry — Wal-Mart Stores Inc., Target Corp. and Kohl’s Corp. — prompted several analysts to downgrade their outlooks for the season. But most buyers remained optimistic, as many noted it won’t be hard to beat last year’s soft numbers.

“Every year, they tell us [the holiday] is not going to be good, but people spend,” noted Janice M. Pope, who plans to open Stil, her first contemporary store, in Thousand Oaks, Calif., on Nov. 15. Pope said she’s not scared to take the plunge in the middle of one of the toughest retailing periods in the last decade. “No one ever spends less,” she said.