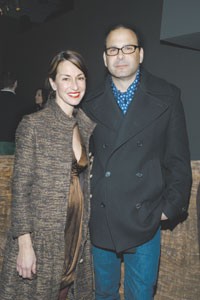 NEW YORK — For an industry that takes photography very seriously, many designers and fashion executives became surprisingly shy at the sight of the photo booth at Donna Karan’s party on Thursday to welcome Steven Kolb as the new executive director of the Council of Fashion Designers of America.

Karan tried to coax some of her favorite fashion friends into taking a snapshot, which would then immediately be projected onto the walls of the Stephan Weiss Studio. In the end, Karan managed to persuade Kolb, who happily posed with her and CFDA president Stan Herman.

“I am trying to figure out a way to do it at Barneys, because all our customers are such exhibitionists,” quipped Simon Doonan, Barneys New York’s creative director.

The party was the fashion community’s first reunion of the New Year, and many used it to wish each other well before the stress of putting together the fall 2006 runway shows kicks in.

“I was writing a note and realized it was Jan. 5 already,” said Tuleh’s Bryan Bradley. “I thought, ‘Wow, the shows are only a month away.'”

The studio displayed two striking decorative tree roots from Bali, which turned out to be of benefit to those who hadn’t met Kolb before.

“Stan’s saying that my outfit matches the tree roots, and he keeps on pointing me out to people like that,” said Kolb, sporting a mustard brown sport coat.

Many designers had some words of wisdom for Kolb, who is a newcomer to fashion, having previously worked for MTV and Design Industries Foundation Fighting AIDS.

“I would tell Steven to get out now,” Bradley joked, scanning the scene. “I love fashion but that job…there are so many big egos. Just look at our fashion family.”

“I wonder if he knows what he is getting into,” Behnaz Sarafpour pondered.

Diane von Furstenberg talked to Donna Karan chief executive officer Jeffry Aronsson and Saks Fifth Avenue’s president and ceo Fred Wilson, then got cozy with Oleg Cassini on one of the sofas. Von Furstenberg also had some words of advice for Kolb: “He should be himself: smart, humble and intelligent. I am very happy with our choice.”

“What a group of people you will be handling,” Karan told Kolb. “I may just have to come back to the board [of directors] to see it.”