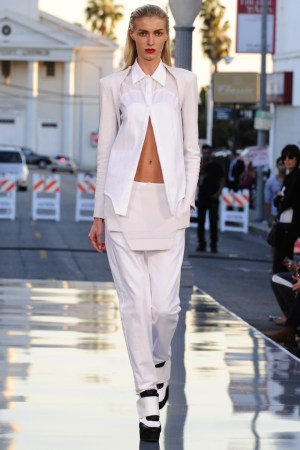 For his men’s and women’s spring collection, designer Ashton Hirota turned to the Hasidic and East L.A. cholo cultures, two seemingly disparate communities that share a dress code grounded in clean, structured shapes. Hirota gave an edge to the crisp button-ups and oversize pants by adding cutaway hems, sheer layers and stretch leather, all in his typical black-and-white palette. He also injected a street element with hoodies, quilted sweatshirts, leggings and HotPants.

The attention-grabbing outfits are bound to land on the heavily tatted bodies of his Goth fans, as well as celebrity client Adam Lambert, who checked out the looks from the front row.