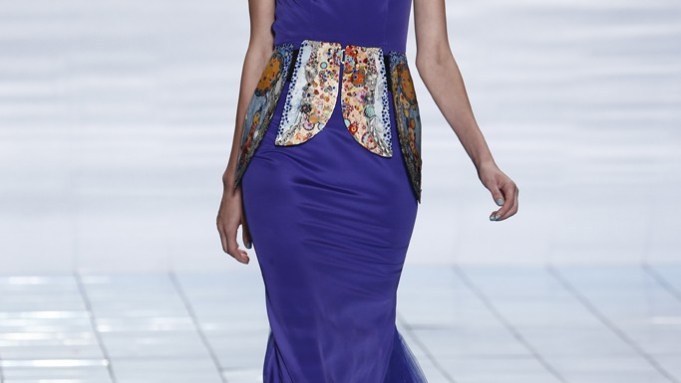 IMG in recent years has made a greater push to include international designers at Lincoln Center. More than 12 countries are represented this year — including Australia, Brazil, China, France, India, Israel, Italy, Korea and Spain, in addition to the U.S. There are also 15 foreign designers showing for the first time, including two from the Commonwealth of Puerto Rico: Stella Nolasco and Luis Antonio.

Collectively, designers of Asian descent — more than 11 — represent one of the largest representations this season. In addition to the American designers who are of Asian descent, two Chinese brands based in Shanghai are showing for the first time: Oudifu and Taoray Wang. Two others, Korean designers Son Jung Wan and Lie Sangbong, have shown before and are well-known overseas.

In addition, there are designer-group collections — Concept Korea and Fashion Shenzhen — that are government sponsored.

Concept Korea, which typically showcases a selection of four South Korean designers for both the fall and spring seasons, is a combined effort by the Korean Ministry of Culture, Sports and Tourism and the Korea Creative Content Agency to raise awareness of Korean fashion and local support for home-grown designers as they expand their businesses abroad. In past seasons, these designers tended to focus on Korean streetwear.

Fashion Shenzhen is sponsored by the Chinese city of Shenzhen, which is sometimes referred to as the fashion capital of China since it is an apparel manufacturing hub. The program’s purpose is to allow the designers to learn from their American counterparts at the different venue events across town during New York Fashion Week. Part one includes a venue that features presentations from 15 designers from the city, while part two is a runway show highlighting three of the designers. This year, the government chose to introduce Lizzy and Haiping Xie, along with Ellassay, one of the featured runway designers from the spring 2014 show.

Shen Yongfang, president of the Shenzhen Garment Industry Association, said, “We choose the brands based on their designer style. Ellassay is a ready-to-wear brand, while Lizzy is also rtw, but is presenting cocktail dresses at the show. Haiping shows inspiration from traditional Chinese culture.” She added that the city is home to 3,000 apparel firms, 800 brands and more than 350,000 workers.

Taoray Wang — a descendant from the Qing Dynasty — grew up in Japan and worked under Junko Koshino, a top Japanese designer. She moved to London in 1998 and now alternates between her design studio there and company headquarters in Shanghai. “Being here at New York Fashion Week is more about business opportunities for the designers, not showing the talent,” she said.

Wang’s looks, particularly the long and short bustier dresses, were classic in style. One standout was a white bustier jumpsuit featuring wide flared legs that gave the appearance of a dress.

One commercial lender at the show, who requested anonymity, observed, “Some of the Asian designers still need to learn more about American tastes if they want to sell here.” Even when there are a few looks that could be appealing to U.S. consumers, the problem for many is that there’s no consistency within the same collection, this lender said.

Another lender noted that designers such as Nolasco and Antonio, who grew up in the West, don’t have that problem, even if they manage to inject their own culture’s style influences into their collections.