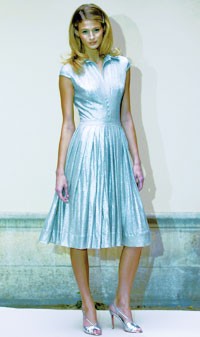 Martin Grant: If ladies could lunch every day after “Breakfast at Tiffany’s,” Martin Grant would live in a perfect world. The Australian designer’s collection for spring, with its retro couture-style jackets and graceful cocktail dresses, was perfect fare for an Audrey Hepburn type. Perhaps that’s why Marco Gobbetti, president of Givenchy, attended Grant’s show. Could Grant fill the position left open by Julien Macdonald? While that remains to be seen (Gobbetti was spotted at Sophia Kokosalaki, too), Grant’s doing fine on his own. Season after season, he refines the classics loved by his clients, including Lee Radziwill, who was at the show, while adding enough novelty to keep the fashion pack interested. Grant’s good coats and his fetching trench with subtle pocket details and flared sleeves was an example of his impeccable tailoring skills. Smocked silver jersey skirts came with frills and had a fey allure, as did the silver tennis dress and ruffled black chiffon dress trimmed with satin. Grant’s voice is steady and sure.

Loewe: Jose Enrique Ona Selfa, designing for this Spanish house for just more than two years, has settled into a comfortable groove, creating easy, luxurious sportswear while drawing on Loewe’s leather heritage. This outing was his best to date. The clothes were clean and approachable, with rich leather coats, breezy tops and suede trousers and skirts. Loose dresses and blouses were paired with fitted bolero jackets, while ornate ethnic embroidery livened up the more notable suede pieces. A travel theme showed up in the form of gypsy tops and full peasant skirts. Working a soft palette, from pale blue and dusty pink to white and tan, diaphanous chiffon dresses for evening, some decorated with exotic embroidery at the neckline, rounded out a respectable show.

Andrew Gn: The late Tony Duquette and what Andrew Gn called the Hollywood decorator’s “Baroque-psychedelic” style inspired Gn’s hyper-elaborate spring collection. Appropriately enough, the look was embellished to the brink — and sometimes beyond — with indiscreet baubles. Duquette’s mission was always over-the-top or bust, and Gn followed suit, coating the collar and cuffs of a tweed coatdress with a thick crust of pearls, then adding jeweled buttons and cinching things tight with a pearl belt for good measure. Chunky beading harnessed evening gowns and bordered tunic tops that laced up with tassel ties. And, just like Duquette, Gn feared no pattern, from shocking coral prints to a peppy pink brocade glazed silver. These are expensive clothes, and they looked it.

Occasionally, however, what the collection boasted in brazen attitude, it lacked in the eccentric frisson of Duquette’s wild works. But then, Gn has built a solid base for himself among socially inclined jet-setting types, who are seriously smitten with him, and aren’t too fond of dressing like oddballs. In their honor, this season also saw Gn inaugurate a younger, sleeker silhouette — all the better to accommodate those ladies, who aren’t too inclined to disguise their assets, either.

Loulou de la Falaise: “It’s very fresh and girly,” explained Loulou de la Falaise as she showed her spring collection in her Left Bank shop. “It’s a mix of ‘Roman Holiday,’ ‘Treasure Island’ and ‘The Count of Monte Cristo.’” With a witty and light hand, de la Falaise interpreted those inspirations in crisscross tops that tied like pennants at the front and on sleeves, high-waisted skirts, wide pants and a sailor jacket. Striped pedal-pushers tied at the knee and jersey wraparound tops with ruffles were young and cute, while a Liberty-print dress trimmed with black lace was paired with a beautiful leather blouson lined in polkadotted muslin. Chiffon dresses had a seductive allure, as did the original jewelry — coral with mother-of-pearl in oversize necklaces — that is the designer’s hallmark. Building successfully on an aesthetic that balances exotic references with Paris chic and English eccentricity, de la Falaise gets better every season.