At 87, Lea Gottlieb Keeps in the Swim With Tefron

NEW YORK — At age 87, swimwear legend Lea Gottlieb starts her day at five in the morning by sketching new swimwear designs, the same way she has for almost 50 years.

A grande dame in the industry — she and her late husband, Armin,... 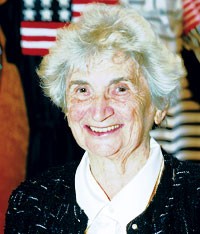 NEW YORK — At age 87, swimwear legend Lea Gottlieb starts her day at five in the morning by sketching new swimwear designs, the same way she has for almost 50 years.

A grande dame in the industry — she and her late husband, Armin, founded Gottex at the end of World War II — Gottlieb has launched a swim and cover-up line with Tefron, the Israeli garment firm that entered the swim arena last year and is building its offerings.

“I like to be busy,” Gottlieb, a petite, spry woman, said during an interview at Tefron’s New York office, where she was visiting from her home in Tel Aviv. “I am happy when I have a lot to do.”

Her new collection, which will be sold under the Lea Gottlieb name, draws inspiration from the natural environment of Israel as well as the American symbol of red, white and blue.

“This line appeals to customers who want mature swimwear with sophisticated designs,” said Ronny Grundland, head of Tefron’s new swimwear division. Last year, Tefron, which is best known for making innerwear and activewear, acquired the outstanding shares of Macro Clothing Ltd., an Israeli manufacturer of swimwear, as a way to diversify.

Grundland worked at Gottex for about 10 years and said Gottlieb approached him about producing her line. “She is a national treasure,” Grundland said. “And she is also a workhorse. She can’t stop.’’

Wholesale prices for the Lea Gottlieb collection range from about $48 for a bikini to $150 for a caftan. The line will be sold on a limited basis worldwide; in the U.S. it already has been picked up by Neiman Marcus for spring. “We think this business could eventually be about $10 million or $15 million,” Grundland said.

Gottlieb said her creative energy still flows, and she gets design inspiration from the world around her. “Shoes on the street, nature, everything,” she said.

Though largely unknown in the U.S. outside the swim industry, Gottlieb is a celebrity in Israel. With her husband, she built Gottex into an international powerhouse and it became one of Israel’s leading exporters. A native of Hungary, Gottlieb was trained as a chemist and moved with her husband to Israel at the end of World War II, where they started selling rainwear before moving into swimwear, which better matched the country’s climate.

At Gottex, she was actively involved in every facet of design, from choosing the fabrics to overseeing samples. The company became renowned for fashionable swimwear in innovative fabrics, winning numerous swimwear awards. Over the last 50 years, Gottlieb has mingled with politicians and celebrities, including Princess Diana, Jacqueline Kennedy Onassis and Barbara Walters.

Gottlieb, who has a shy smile and is always impeccably dressed, has a penchant for Chanel and designer wares. An exhibit about her life and work is slated to go on display next year at the Tel Aviv Museum of Art.

She left Gottex a few years ago, after the company was acquired by Africa Israel, a Tel Aviv real estate conglomerate. Gottlieb was said to have been forced into retirement. Nonetheless, she shows no bitterness to her former employer and declines to talk about the company, preferring to focus a visitor’s attention on her new designs and prints.

For Tefron, the Lea Gottlieb line is viewed as a special collection that builds on the reputation of the designer. It is also Tefron’s first attempt at its own swim brand and is something of a test for the company, which prefers to stay behind the scenes and produce products under private label, Grundland said.

Nonetheless, swimwear is a fast-growing division at Tefron. While Grundland declined to break out sales, he said the swim division could grow to about $30 million to $40 million at wholesale within the next three years, and account for about 10 percent of Tefron’s overall sales, which were $163.1 million last year. Now swimwear accounts for an estimated 3 percent of total company sales, he said.

“Nobody comes into these stores to buy swimwear,” Grundland said. “It has to be something special. Now under Tefron’s ownership, we have the capabilities and facilities to do that.”