At Home With Kom I, the Björk of Japan

The lead singer of Wednesday Campanella, a pop idol for misfits and disgruntled youths, invites WWD to her apartment ahead of a new album release today.

Kom I and her pet snake in her Tokyo flat.

She is a pop idol for misfits. Kom I, the lead singer of Wednesday Campanella, is considered the Björk of Japan: her delicate voice, genre-defying music and avant-garde fashion sense exude the same eclecticism for which the Scandinavian singer is known.

On a recent Saturday night, the 26-year-old Kanagawa native is lounging at home in Tokyo with her pet snake — under the weather from a raucous time the evening before. In her shared apartment, she reclines on her bed — little more than a Western mattress on the floor — taking sips of air to abate her nausea.

A self-proclaimed “chameleon,” Kom I’s popularity among young Japanese people comes at a key time — her music services a generation whose disenchantment with life, government and finances matches that of Millennials in the U.S. These jaded youths consider her a ringleader, guiding their escape from mass culture and limitless consumption. 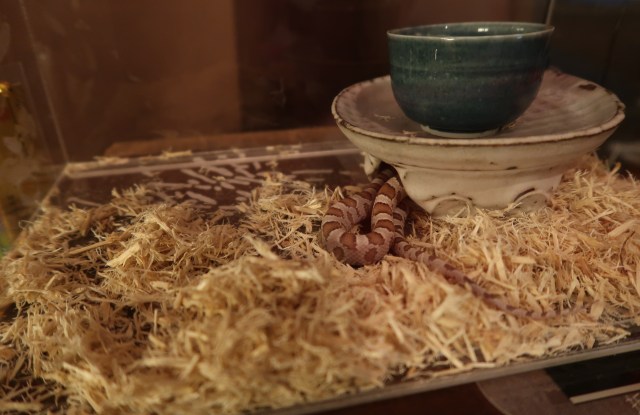 “I’m an outsider. It’s much easier to express yourself in the U.S. than in Japan, people react naturally there — when you feel something weird you can say it’s weird and react. People in Tokyo are more stiff. It’s my purpose to free people here,” the singer says of social pressures in her native city.

Wednesday Campanella (Suiyoubi no Campanella in Japanese), founded in 2011, features Kom I as its lead singer and two supplementary band members who act more as producers and do not perform onstage. Kom I’s soft voice (requiring immense amplification), interpretative dances and zany stage presence have made the group an indie favorite, with critically acclaimed albums leading to performances at festivals like Primavera Sound and South by Southwest.

The group’s new EP, “Yakushima Treasure” — a collaboration with the producer Oorutaichi — was released last week, with a documentary and music video sponsored by YouTube for its new premium subscription service. While previous Wednesday Campanella albums have referenced popular electronic and hip-hop music, their new work lands closer to home — examining Japanese culture and traditional music hailing from the island of Yakushima, with songs that are largely improvised.

Kom I’s style is emblematic of a new era in Japan as the country breaks with Kawaii, its culture of cuteness. She is Japan’s first major female pop star since Kyary Pamyu Pamyu, a solo act known for her cutesy style who was named as Harajuku’s official Kawaii ambassador in 2012. 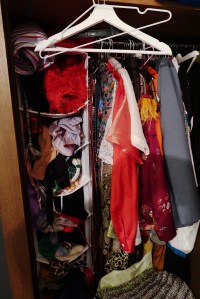 Though Kom I and Pamyu are friends, she feels that men implemented Japan’s cute affectations as a means to stunt women’s success. “Boys wanted girls to be cute, not aggressive. It’s a lot of pressure — I don’t like that,” she says.

In the last four years, Kom I has set a new marker for pop stars in the Japan — provoking the public with a self-confidence and uninhibited persona that is rare among female performers there. Kom I’s fashion, too, has acted as an antidote to the cutesy, compliant paradigm that came before her.

Her madcap, eccentric outfits are crafted in partnership with creatives from across Japan and China who devise visual identities for her music videos and tours. In the past Kom I has worked with Tokyo-based stylist and musician Bunta Shimizu, known for his mismatched, genderless looks that are largely thrifted around the city. She’s also worked with the Instagram native, Chinese art brand No Dress — wearing their rococo rave corsets and skin-tight dresses.

With each album, vacation or new lover comes a fresh aesthetic mission — referencing traditional textiles from India or China; preferring pants that are slick and fitted or exaggeratedly large; dresses that are flouncy and feminine or athletic track suits that are pulled from the men’s rack. Then there is her hair, which routinely yo-yo’s from pixie short to waist-length, from green to blonde.

Despite Kom I’s fashionable public image, the room she rents near Shibuya features only a small closet about one foot wide, which stands about half empty with clothes spilling onto the floor. The apartment reads more as a post-college dwelling than a celebrity abode, with makeup and boxes strewn about the room.

“I think I’m not a big fan of fashion. I don’t go to shows and exhibitions. I don’t notice the fashion week,” Kom I proclaims.

“You can see I don’t have many clothes in my tiny closet….I think my style is funny, I like to be a chameleon. I like to change myself, so maybe to that point I usually don’t dress up so much. I like comfortable and tight clothes or pants that are easy to dance in,” she says. She comes up with most of her ideas for music, performances and visual expression “in front of the speaker,” attending weekly trance raves as a form of meditation and exercise.

Raised in a traditional household with a salaryman father, Kom I’s success has come through various channels of rebellion. For her new song, the artist — already relatively uncommercial — is further diverging from music convention.

Wednesday Campanella ventured to the Japanese island of Yakushima to study traditional folk music from native islanders in their 80s and 90s, with the aim to preserve and promote their melodies before they face obsolescence. The group’s new album — a series of meditative, droning tracks — features recordings of the women consulted in its fieldwork.

In doing so, Kom I is helping chart a trend among Japanese Millennials to re-embrace traditional art forms that were lost in their parent’s “bubble” generation, when a sweep of Western materialism and consumption overtook homegrown traditions.

“We feel like we forgot what we left, it’s very important stuff, the culture of the past — there used to be many beautiful things. That’s everyone’s feeling I think. We are looking to reclaim a sort of lost pride,” she explains. “Many people are living in pressure here — hopefully I can deliver something to release them.”