Despite coronavirus anxieties, the semifinalists of the LVMH Prize spoke of the power of physical events and one-on-one conversations.

The semifinalists of the LVMH Prize for Young Designers.

PARIS — Despite coronavirus anxieties and the cancellation of the popular cocktail event to toast the LVMH Prize for Young Designers, this year’s semifinalists were all present — no face mask or hand sanitizer in sight — to greet industry figures over more casual appointments on Thursday and Friday.

Gigi Hadid, ambassador for the prize showroom, joined editors, buyers and some of LVMH’s star creative directors — including Clare Waight Keller, Jonathan Anderson and Kris Van Assche — walking from booth to booth to get better acquainted with the 20 up-and-coming brands competing for this year’s prize.

“It’s important to come and listen to these young people’s stories, what they stand for and the innovations they are working on,” said Dior’s Maria Grazia Chiuri. “They dare to dream and that’s so important. It’s so inspiring to see fashion at its early stages.”

A panel of 68 experts has been charged with selecting the eight brands that will go through to the final on June 5, in the hopes of winning a grand prize of 300,000 euros, plus a year of coaching from experts at LVMH Moët Hennessy Louis Vuitton, the parent of brands including Louis Vuitton, Dior and Fendi. 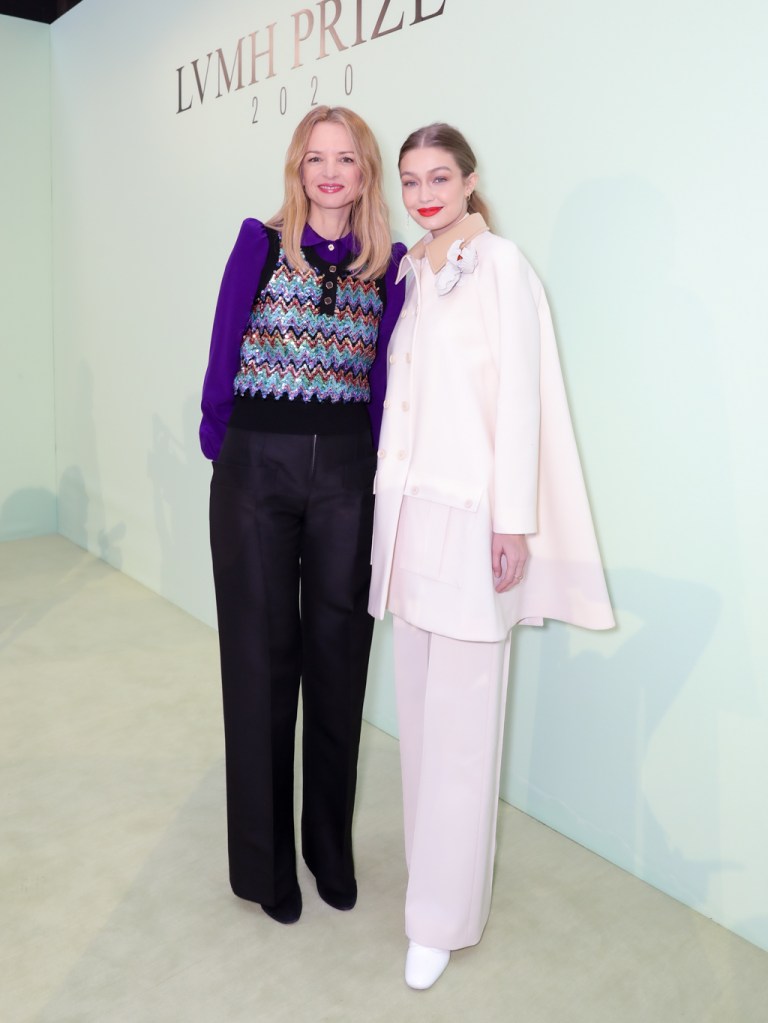 Sidney Toledano, chairman and chief executive officer of LVMH Fashion Group, was checking out Charaf Tajer’s men’s wear brand Casablanca. “It’s not my brand, it’s my town,” quipped the Moroccan-born executive, who was enjoying the more leisurely pace of the showroom.

“It’s more laid-back, there’s less pressure. And it’s a bit more professional. The cocktail was more of a social event,” Toledano said, adding that LVMH thought it was inappropriate to host a party given growing fears about the coronavirus.

The luxury conglomerate is closely monitoring the situation but has yet to cancel any shows by its brands. With events being struck off the Paris Fashion Week schedule left and right, and buyers and editors canceling or shortening their Paris sojourns, many designers have been mulling alternatives to physical events.

Postponed due to the coronavirus, Shanghai Fashion Week is now partnering with Alibaba’s Tmall to create an online platform for Chinese designers and commercial brands to showcase their fall 2020 collections.

But despite being part of the digital generation and having strong social media followings, the LVMH Prize semifinalists spoke of the power of physical events and one-on-one conversations.

“Yes, we do need those viral items, but we also need them to perform in real life,” said Beckett Fogg of Area, the New York brand whose loud, crystal-embellished creations have gained the brand a hip, Instagram-savvy audience.

“Usually the younger assistants are pulling our pieces for shoots, but now we get to meet their editors, too, who have probably seen the brand before but didn’t know much about it. It’s great timing because we had a really successful show in New York and want to keep on growing,” he said.

Peter Do likes to say his New York-based brand was built on the Internet, since all the members of his team met online, yet he believes luxury goods require a physical experience.

“It’s important for the brand to live on social media but also exist in a brick-and-mortar store. We want the community to be offline and online,” he said. “Not everyone shops based on necessities. A lot of people are emotional shoppers and they fall in love with things from trying it on, touching it and feeling it.”

One collection that demanded to be touched was Piero D’Angelo’s intriguing lineup, which included clothes grown out of lichens capable of absorbing pollution. The Italian designer, who studied at Central Saint Martins and the Royal College of Art in London, hopes people will eventually use biotechnology to grow their own clothes.

At Tomo Koizumi’s stand, guests got hands-on with his rainbow ruffle creations. “People can try it on if they have time,” he said. “It’s more for the picture, but it’s also good for wearing actual pieces, so I’m happy to be here to present my actual pieces to people in person.” 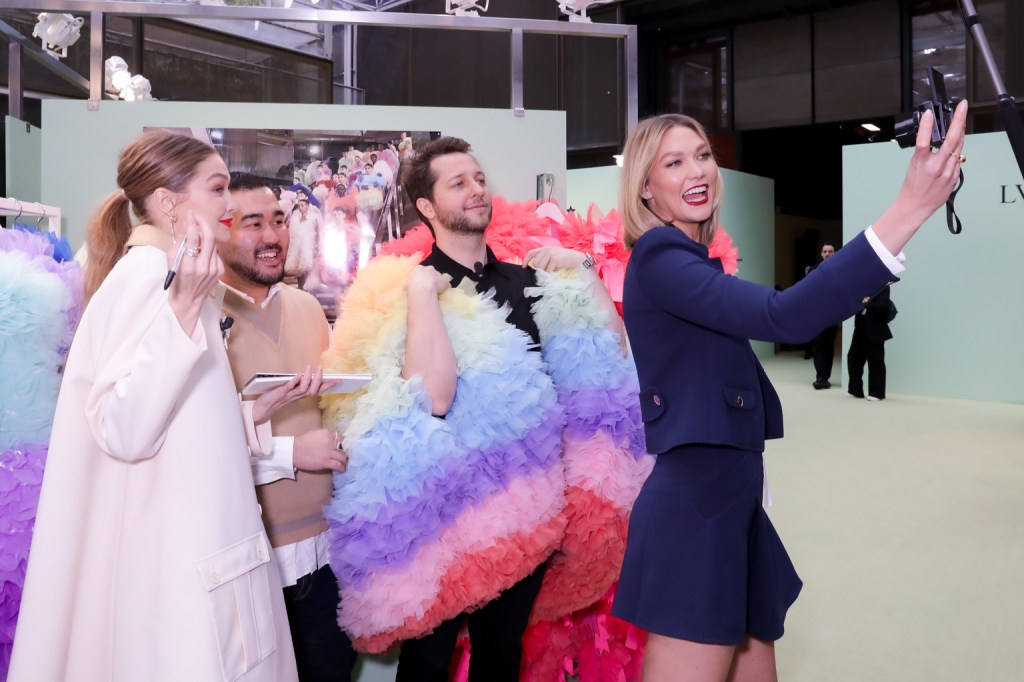 Koizumi, whose Instagram account has almost 61,000 followers, said he also felt safer lending his one-of-a-kind dresses to people he has met in person. “I’m working with a lot of people by e-mail that have to borrow my clothes just by shipping, but if I met someone — editors or stylists — it’s easier and more reliable,” he said.

Guillaume Henry, creative director of Patou, was attending the showroom for the first time, and said that seeing the clothes on racks made them more accessible. “A piece of clothing is a product. Beyond the quality of an idea, a product is also about the quality of the execution, so when you see it up close, it’s terrific,” he noted.

A case in point: Chopova Lowena’s signature kilts, made from recycled folkloric fabrics from Bulgaria including vintage aprons, pillowcases, wall hangings and tablecloths. Cofounder Laura Lowena said many visitors to their stand were pleasantly surprised by the quality of the materials.

“We don’t do shows, so no one really sees the garments in person, so it’s really nice that people get to come up and touch them and feel them and understand that yes, they’re deadstock, but they’re actually amazing quality,” she said.

Her design partner Emma Chopova noted there are different ways to engage a brand’s audience. Chopova Lowena has produced books with photographer Charlotte Wales, for example. “I think that on a runway, I would not consider that a super face-to-face because it’s so quick. I think it’s nice to really touch things and see them,” she said.

London-based Supriya Lele similarly skipped the runway this season in favor of publishing a book that showcases her new capsule collection for fall alongside images of the scenery and the women in her hometown in India.

“What I’m trying to show through my brand is that there’s a lot more to India than glitzy embroidery and those sweet pink Bollywood suggestions,” the designer said. “It’s important to put different stories out there.” 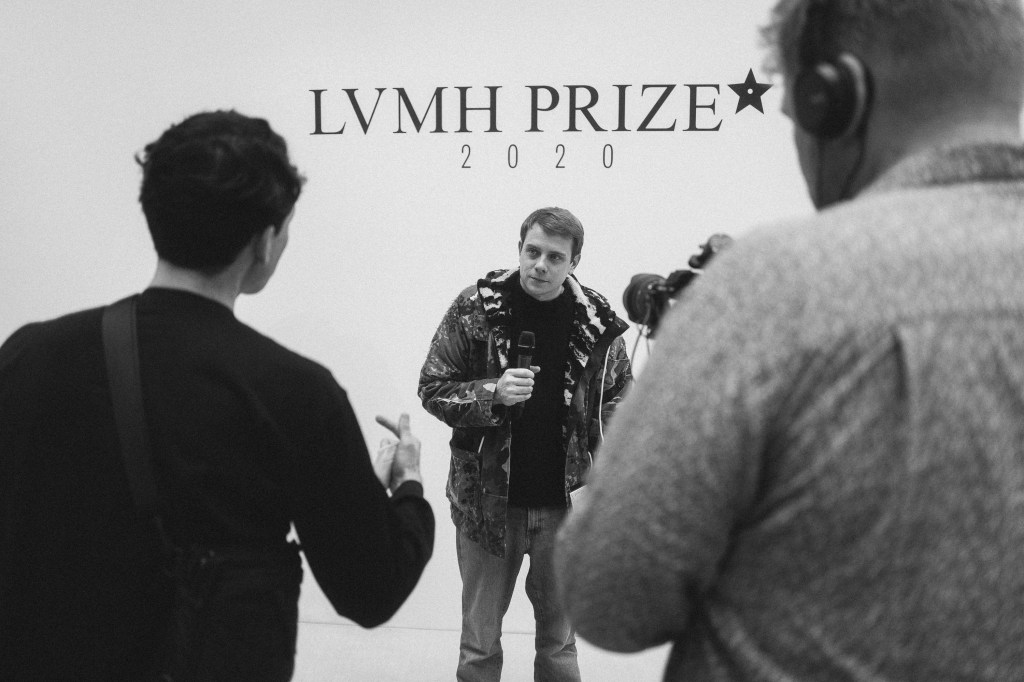 Kaushik Velendra, another Londoner with Indian heritage, has been experiencing rapid growth since the beginning of the year, with his futuristic men’s tailoring making appearances at the BAFTA’s and Grammys.

His aim is to present a more modern vision of what it means to be an Indian designer. “It’s not just about beading, color or culture, but showing a very chic version of what we can actually do. This is the future of tailoring,” said Velendra, whose suits feature metallic embroidered panels and big structured shoulders.

He’s also been rethinking the traditional business model and looking at doing smaller, limited-edition capsules and traveling the world to sell them with retail partners. “It’s like a music tour, but the fashion version,” he added.

Emilie Helmstedt of Copenhagen-based brand Helmstedt said that while physical events were key to relaying her brand’s aesthetic, there were simply too many fashion weeks. “Maybe we can meet in one place in the world, instead of flying all the way around?” she suggested.

Josephine Bergqvist and Livia Schück, the designers behind the Swedish label Rave Review, said they currently show in Copenhagen but would consider switching to virtual reality once the technology has improved. “We’re totally up for that,” Bergqvist said.