The Paris runways were full of frolic for fall with sweetly simple looks, masculine-feminine mixes and punked-out deconstruction. 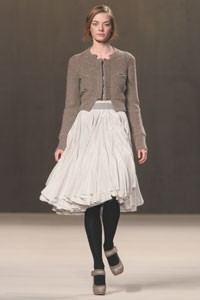 The Paris runways were full of frolic for fall with sweetly simple looks, masculine-feminine mixes and punked-out deconstruction.

Chloé: For top-tier brands, design-by-committee was classified as a bad idea a long time ago. But Yvon Misplaere, Blue Farrier and Adrian Appiolazza, the triumvirate behind fall’s Chloé collection, were the exception to the rule. Forgoing any radical shift, the trio managed to maintain the oh-so-salable sweetness that Phoebe Philo brought to the house, reprising the trapeze silhouette she presented for spring, while gently coaxing out simplicity in tune with the current season’s austerity.

Like a pack of later-day Perry Ellises, the designers sent out loose-cut smocks, no-frills minis, silky blousons and boxy coats, all washed soft in linens and nubby tweeds. An oversized coat was shown over a simple shirt and paperbag-waist pants, while a thick cardigan topped a voluminous layered skirt. The collection fell short, however, when some of those voluminous proportions spilled over into the sloppy.

Of course, it was during Philo’s reign that Chloé became synonymous with discreetly sexy party dresses, and here the trio was in harmony again with several fine night-on-the-town options, including one minidress covered in a blizzard of glitter-flecked ruffles and another in graphic peel-away rosettes. Transitions are never seamless, but this one was pretty close.

Comme des Garçons: Many designers have explored the masculine-feminine divide. But taking the notion to its topsy-turvy extreme — as she’s known to do — Rei Kawakubo turned the tailoring-meets-froth formula into a thrilling adventure in her fall Comme des Garçons collection. Her method boasted a childlike charm and wonder, as she merged sexual identities like a kid piling on costumes pulled from the attic trunk. Kawakubo’s delicately tangled personas stepped out in Zorro masks with roses blooming behind their ears, their formal suits and girly frocks magically intermingled.

A banker’s suit jacket and a prim princess dress became one, with the latter split down the middle and tacked onto the lapels of the former. A puff-sleeved dress hung like curtains framing the front of an argyle sweater, while other carefully dissected dresses meandered their way in and around Kawakubo’s mannish coats. Gleefully off balance, Kawakubo’s coup de grace came at the midway point: half-he, half-she characters as indecisive as tadpoles and wearing men’s suits discreetly webbed between their pant legs with cascades of cha-cha ruffles.

Though the look was naïve, the construction was a precise as it was puzzling. And while Kawakubo’s manic layering often left models with a surplus of sleeves, she’s probably the only designer who, at least in the heat of the moment, can make a four-sleeved coat seem a viable option. (On her way out, cool-headed retailer Joan Burstein was assured that there was a bounty of less-conflicted merch back in the showroom.)

Still, Kawakubo’s obvious joy in both the rigorous and the theoretical sides of fashion made the show itself a joy to behold. She loves to throw caution to the winds, but she also knows which way the wind is blowing.

Nina Ricci: Lars Nilsson has a quirky, some would say odd, sense of color, and he juxtaposed shades of violet, brown, yellow, bronze, blue and green — at times all together — in his Nina Ricci collection. When it worked, the mélange was offbeat and charming. But add to that an arsenal of his typical girly frills — bows, flounces and embroidery — and it felt as if Nilsson, who cited the “chic nonchalance of rock muse Anita Pallenberg” in his program notes, failed to capture the essence of his own inspiration. The clothes had a touch of innocence: a black beaded dress with navy ponyskin straps; a gray dress that wrapped bouncily around in back, and a black taffeta jacket trimmed with black-and-white fur. Yet they lacked Pallenberg’s famous erotically-charged edge. Certainly there were some appealing numbers: embroidered black dresses; ruffled skirts; lace tops; corduroy jackets and vests, and a taupe coat with soft pleated details in back. And a girl in need of cocktail gear would happily float around in Nilsson’s light lavender chiffon dress finished with a yellow bow. But, as the show closed, some clumsier confections rumbled down the runway, including a dress trying hard to be sexy with a to-the-navel décolletage. It seemed that Nilsson needed a meatier approach to make Ricci into a vital, modern brand.

Junya Watanabe: The anarchy symbol on the invitation and the tinny strains of the Sex Pistols sound track preshow provided irrefutable evidence that Junya Watanabe would be picking up the thread of punked-out deconstruction that he began last season. Although the show’s technical problems and the piano music that replaced Johnny Rotten’s spirited crooning gave the whole presentation the air of a student recital, there is nothing remotely amateurish about Watanabe’s complex creations. The designer drew his raw ingredients mostly from the military-surplus store. Adding a dash of the punk hallmarks of black leather and crimson plaid, he whipped them into a beautiful snarl of frock coats, skinny pants and even feminine fare such as trumpet skirts and lace dresses shown layered over artfully snagged poor-boy knits. With its brutish, aggressive styling, Watanabe’s very complete vision can be a tough one to swallow. Nonetheless, his utilitarian references cut close to the way many young fashion customers dress themselves, making it a narrow leap from runway to reality for these clothes. Though the parade of drab olive was undeniably repetitive, there is likely to be many a shopper marching to Watanabe’s beat come fall.

Giambattista Valli: During part one of Giambattista Valli’s show, it was possible to imagine that the designer’s clothes might appeal to women of a certain age and social standing. Out swooshed a short jacket with an oversize collar paired with a full, ankle-length skirt puffed out with a lace petticoat, a neat black alpaca skirt with a prim matching wrap and hat, and a fun fur blouson. Valli, it seemed, was referencing Dior’s New Look, trying to give it a modern spin, and generally mining the vocabulary of classic couture. But while he’s the go-to guy for the Ladies Who Lunch, this collection looked off-target and old. Turbulence hit about halfway through the show. Sure, the bustier dresses were OK. And a girl can always use an extra black or camel cashmere sweater or coat. More perplexing, though, were the clumsy dresses and skirts decorated with ostrich feathers and cut so tight at the knees that the models stumbled down the runway like Kabuki girls. There were more flattering long hourglass versions and flirty short ones in lamé with tufts of feathers at the bust or poking from the hem. But maybe those looks are best left to the Lido.