With her multimillion-dollar sponsorship deals, teen golf prodigy Michelle Wie is raising the bar for all women in sports. 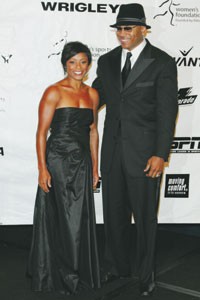 “It’s great to see,” said tennis legend Martina Navratilova about Wie’s blockbuster deals with Nike and Sony. “We still have a way to go before women are equal with men when it comes to sponsorship, and I would certainly like to see more women athletes hit pay dirt, but we are on our way.”

Olympic soccer star Mia Hamm said, “The opportunities Michelle Wie has created for other women are wonderful and I hope those opportunities continue to grow. There are always more doors that need to be opened, and we have a responsibility to try and open them.”

Held at the Waldorf-Astoria here, the black-tie gala, now in its 26th year, drew about 80 top female athletes from 43 sports and hundreds of other guests.

“I have never been to this before and it’s very refreshing to see great-looking women with no Botox and no collagen,” Marshall joked to the packed house. “And if anyone wants to go to a WNBA game, let me know. I am a huge fan.”

LL Cool J, sporting a black suit, sunglasses and a fedora, said he, too, was impressed with the scene.

“Let me start off by saying there are some great genetics in this room,” he said. “In my industry, so many lyrics portray women in ways that are not the most respectful. The athletes here personify and exemplify what women should be: focused, determined and hard working.”

The event is similar to red-carpet award shows in that athletes dress up, receive honors, make sometimes lengthy speeches thanking their families and friends and have photo ops with the media prior to the start of the presentations. But unlike the fashion frenzy and painstaking styling and preparation that takes place before the Academy Awards and the Emmys, many of the athletes had no clue what they were wearing.

“Hm, good question,” said WNBA player Tamika Catchings when asked if she knew the designer of her long, silver gown. “My sister is the real fashionista.”

The evening raised about $1.5 million and featured a number of moving tributes to pioneers in women’s sports. Two-time Olympic gold-medal figure skater Katarina Witt was named to the International Women’s Sports Hall of Fame and a tribute video portrayed how she got her start in East Germany and the political difficulties she overcame to achieve her international success.

The other two inductees into the Hall of Fame this year were Luisa Harris-Stewart, a member of the first U.S. women’s Olympic basketball team, and Margie Wright, the longtime head coach of the Fresno State softball program. ABC broadcaster Robin Roberts won the Billie Jean King Contribution Award and tribute awards were given to the “91-ers” — soccer players Hamm, Brandi Chastain and Julie Foudy, who won the World Cup in 1991 — and to the WNBA, which celebrates its 10th anniversary this year.

Track and field Olympic athlete Yuliana Perez, a Cuban-American, picked up the Wilma Rudolph Courage Award for overcoming political difficulties in Cuba to become an Olympic athlete in the U.S.

Founded by Billie Jean King in 1974, the WSF seeks to promote sports and physical activity among women, and it has a wide range of advocacy, research and education programs. Some presenters and athletes spoke about the need to keep Title IX, the federal legislation guaranteeing women gender equality in education and athletics that has come under fire in recent months.

“What is important about the Women’s Sports Foundation is always giving the best of yourself to benefit others,” said Chastain. “All of us have a responsibility to make sure women in sports survive.”