Attendance Up at Paris Men’s Shows as French Aura Grows

The French capital is benefiting from a growing reputation as the global epicenter of men’s fashion. 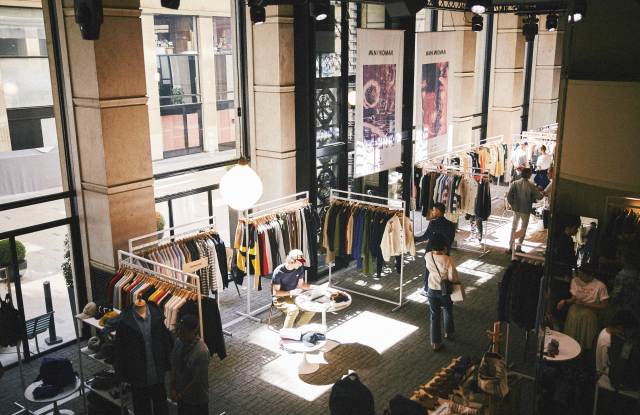 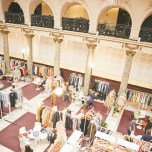 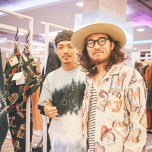 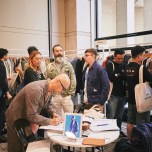 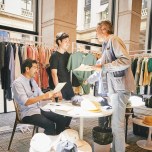 PARIS — Paris men’s wear and coed trade shows saw a rise in international buyer attendance as the French capital bolsters its position as the global epicenter of men’s fashion.

“Paris has become stronger for the past couple of seasons, because everything is concentrated in the same week, compared to New York, where you have fashion week, then market week. There’s no umbrella unifying everyone there,” said Antoine Floch, cofounder and director of the Man/Woman trade show, which stages a New York edition.

The event reported an increase in overall attendance at the Paris spring 2020 shows, held in three locations around the Place Vendôme, spanning men’s, coed and women’s pre-collections.

Combining trade shows and showrooms with the official Paris Fashion Week calendar at the end of June is more practical for buyers, who come to Man/Woman between fashion shows, said Floch. “It’s a real strength to have that level of high-quality buyers,” he noted, reporting an uptick in American buyers, as well as more brands choosing to exhibit in Paris over New York this season.

Tranoï also saw an increase in attendance from major international and Japanese retailers, though overall attendance dipped in comparison to last year. The show’s central location at the Palais de la Bourse was redesigned to have a more open, department store layout for greater visibility, and it hosted a fashion show for emerging designer Arthur Avellano.

Tranoï continues to partner with London Show Rooms through the Tranoï Week event held in the Marais. “It feels like men’s wear is really booming in Paris,” said designer Per Gotesson, who showed there. “You have all the brands here that I looked up to before I started. Rick Owens is one of my favorites.”

For his spring 2020 collection, the designer developed his signature denim drape, and “managed to simplify and distribute it across the collection, so it comes together in a more mature way,” he said. 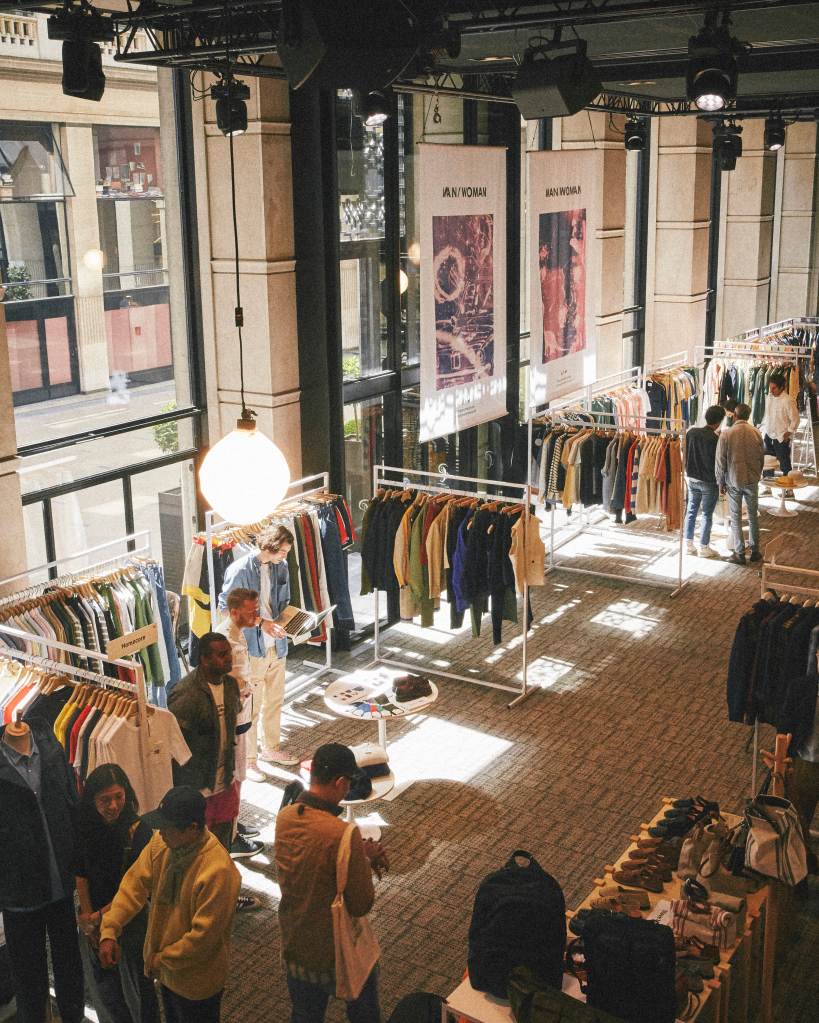 In another sign of the growing attraction of Paris, the Copenhagen International Fashion Fair, CIFF, launched its first Paris edition this season, held from June 21 to 24 at Garage Amelot, with 50 brands showcasing pre-spring and men’s wear collections, alongside panel discussions, film, art and design installations.

“Paris is long-established as the fashion capital of the world, where the industry converges,” said Kristian W. Andersen, chief innovation officer of CIFF, regarding the decision to expand.

“The idea was to bring to Paris what makes us so specific to Denmark. Anyone who has come to CIFF Copenhagen knows that we are known for offering visibility to brands and designers with no distinction of size,” he added.

The show featured Chinese-Korean designer Ximon Lee, who presented for the first time in France, in a caged set filled with flowers, filmed with surveillance cameras. Han Kjobenhavn’s showcased its latest collection in a runway show.

Buyers shared a sense of excitement sparked by the city. “We see people who say they don’t need to go to New York anymore, and will just do Paris,” said retailer Greg Lellouche, founder of No Man Walks Alone in New York.

“It’s definitely getting stronger, and people expect to see a lot of things in Paris. For Japanese buyers this is the nexus for men’s buying now, and brands that come to show here feel like it’s definitely worth their time,” he said.

And while months of yellow-vest protests in the capital did complicate things for retailers last season, they remained hopeful. “The yellow vest protests seem to have stopped, and overall things are fine. We’re getting by, but it’s not simple,” said Florence Rouanet, buyer for the French chain Victoire.

The larger trade shows nevertheless presented difficulties for many buyers, who struggled to sift through the sheer quantity of products while balancing tight schedules.

At Tranoï, Simon Burstein, owner of The Place London, said: “These trade shows are challenging, because they’ve taken away all the different divisions, so you get a mass of clothing, and you have to integrate it.” Burstein recently opened a women’s boutique in the Odéon neighborhood of Paris.

“In a way, the showrooms are benefiting. But for anyone who’s starting out, and has a good idea, this is the place to come. Trade shows give young designers an opportunity, and I think that’s probably what they have to do: constantly renovate, have young blood. That’s the validity of the trade shows, and that’s why I come, to see if I can spot somebody new,” he said.

Most buyers hunting for independent brands were satisfied by the show offerings. “I only come to Tranoï, because I’m looking for different things, and this is where I find them,” said Tonja Dimov, owner of the two-store Swiss chain Tonya. She liked the Charlotte Simone and Pierre-Louis Mascia collections. 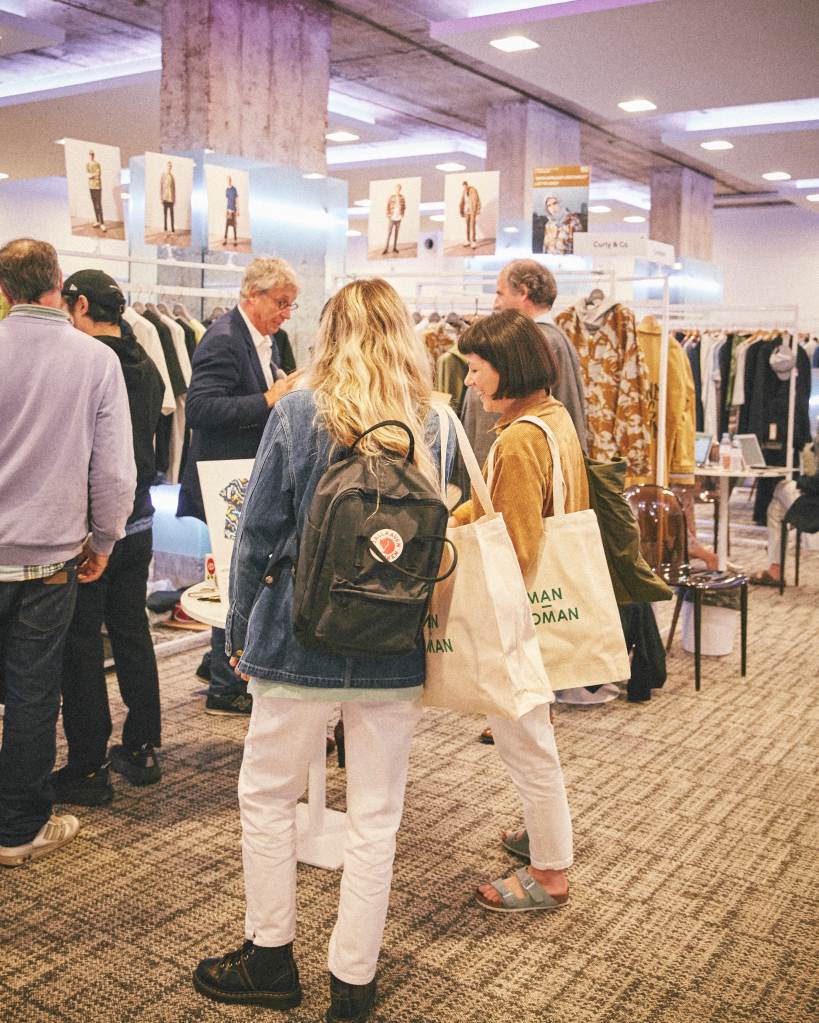 “This is what we’re looking for. We have to mix main label brands with special, independent brands. It’s the only solution,” agreed Riccardo Sargeni, buyer for Officine Red in Rome, while at Man. With the Italian market struggling, “we’re here to search for new energy and motivation to create new appeal, and mix tradition and innovation,” said Sargeni.

He spotted several Japanese brands he liked, as well as Gitman Vintage with a more colorful collection than usual, plus Sage de Crêt, Veja shoes, J-B-J, Nanamica and a Japanese T-shirt brand with handmade graphics, called Riding High, at the Tokyo showroom Jumble, hosted for the first time by the Man show.

“Last time you felt when you were making orders that there was a nervous energy [from the brands], a sense of fear or anxiety, but not now. People are pretty positive,” said Alain Dovat, buyer for the two-store Swiss chain Monsieur Alain. He loved the Corridor collection at Man, noting the designer has “really enriched and developed his collection.”

“We like his casual tone. It’s informal but at the same time very elegant,” agreed his colleague Maria Trofimova. The retailers added Jungmaven to their list of brands, and reordered fast-selling Cableami Japanese hats.

Clara Macfarlane, cofounder of ADG Studio in Grenoble, said her favorite discovery at Man was the Spanish label Walkers Appeal, for its quality-to-price ratio and eco-friendly approach. “They have a very small family workshop, and at the same time the style is minimalist with the extra touches you need in the details, and natural colors,” she said.

“More brands are working with laboratories to create new products and trends,” said Thierry Paixao, cofounder of ADG Studio. “For example, Eastpak collaborated with emerging brands to create the lightest possible bag.” He also noticed an increase in “quality and the minimalist look, plus the influence of tech-wear, which we see in transparent, light materials.”

“Increasingly, brands are concentrating on how to dress people every day, without a struggle, and there’s a timelessness to it,” added Macfarlane.

In other trends, the shift from street style to a more tailored look was made plain. “There’s the beginning of the start of the backlash to streetwear. This might be the season that’s starting that turn, where it’s less playful, but a little bit more elegant,” said Lellouche of No Man Walks Alone.

“We just saw a sportswear brand, Christopher Raeburn, that did their first blazer and suit. They still use their crazy fabrics, recycled parachutes, but did a navy and black blazer with matching pants. If you’d asked me a year ago, I’d have said there’s no way they’d make a suit,” he added.

Lellouche said one of his favorite brands at Man was Korean-designed Document, because of its great taste, subtle details and proportions. “It’s the kind of stuff that you want to wear all the time, and really rewards a closer look,” he said.

Other trends at the men’s shows included more toned-down, natural colors, plus a lot of indigos, and some fluorescent pops. Vintage army and workwear looks in relaxed, bigger silhouettes continued this season, with few major changes.

At Tranoï Week, designer Charles Jeffrey Loverboy reworked aspects of military wear with his latest collection centered on the idea of “artwork made manifest.” “I retreated into drawing a lot, and developed these abstract artworks that were based off of old punk and newspaper clippings, and frenetic things that came to mind from the music I was listening to,” he explained. 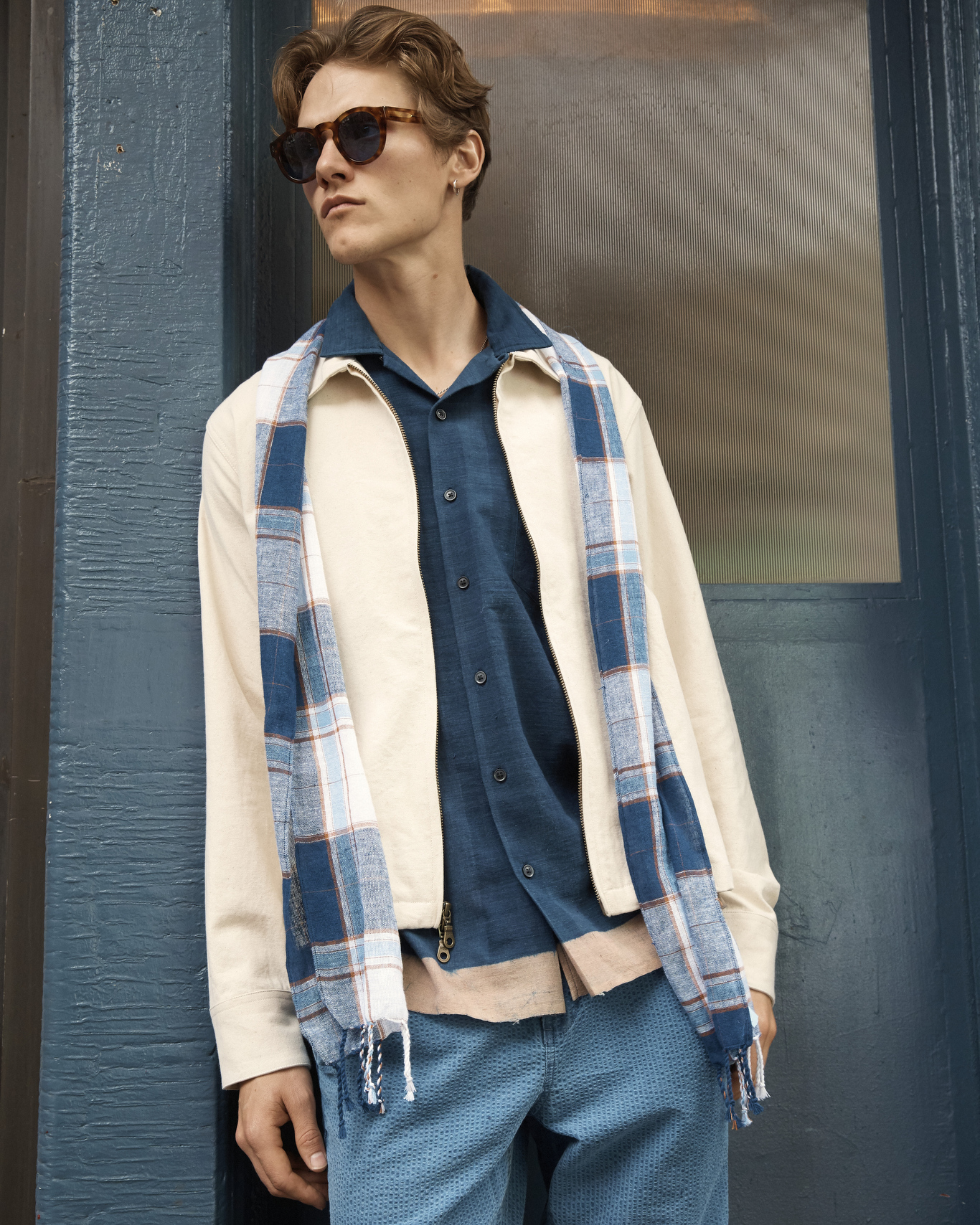 For its latest collection, the New York-based designer focused on a concept of natural electricity, “these vibrations you feel towards objects or people, or currents that happen between us, and why you feel naturally attracted to something,” said Snyder. He was aiming for “subtly beautiful” looks, he said. New developments include more knits, natural dyes and unprocessed cottons and cotton-linen blends with unusual textures. Some key items include spring-weight cashmere sweaters, nylon raincoats that are dyed with natural, plant-based colorants, chunky cotton knits, and the brand’s first sneaker — the retro-inspired Recess Runner. 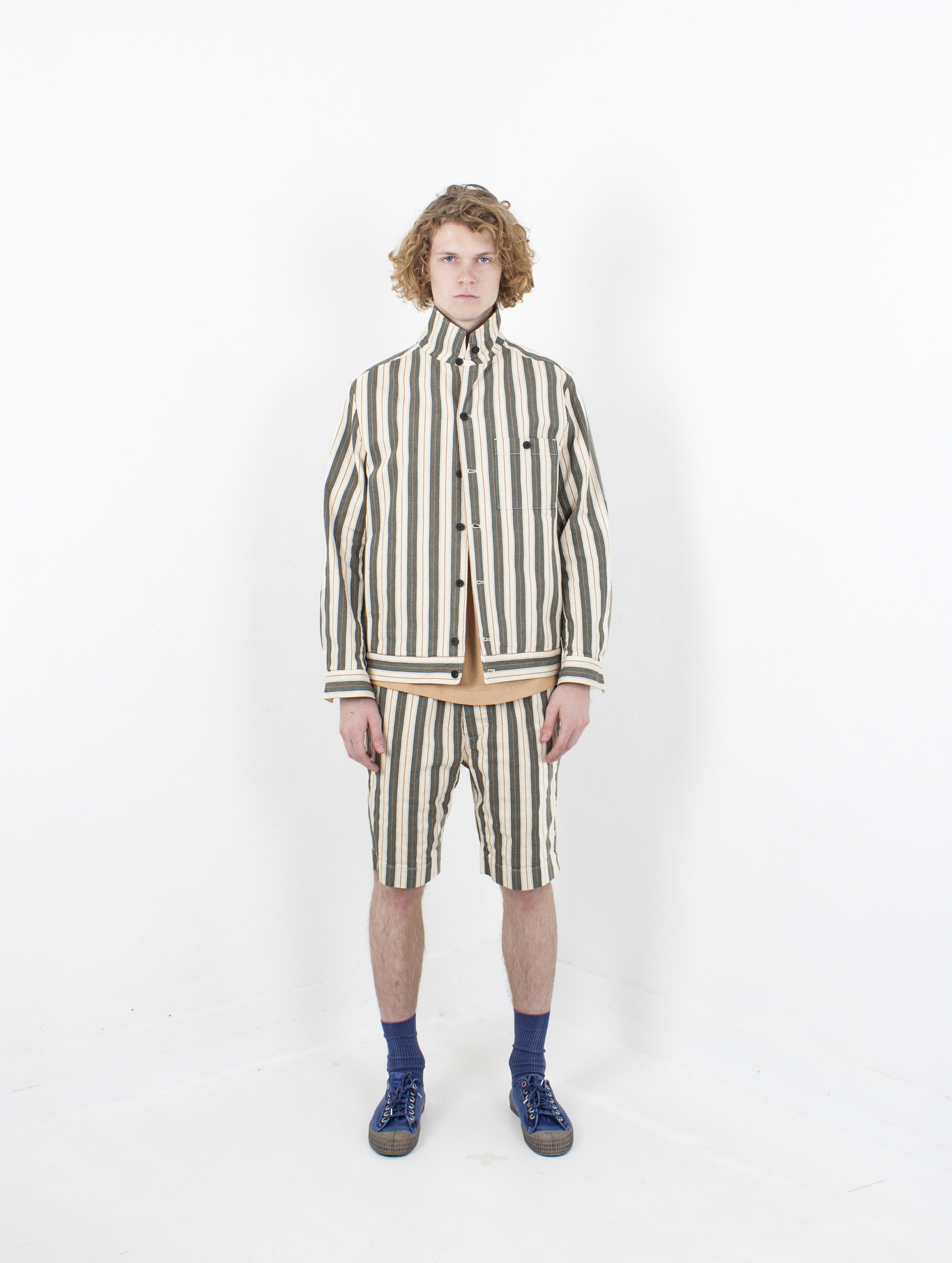 Gilles Deleuze’s philosophy of “repetition and difference” was behind the Seoul-based designer’s latest collection, which repeats colors, particularly navy, indigo, and the newly added stripe, with subtle sartorial shifts in detail and fit in each model. Silhouettes were oversized and relaxed. 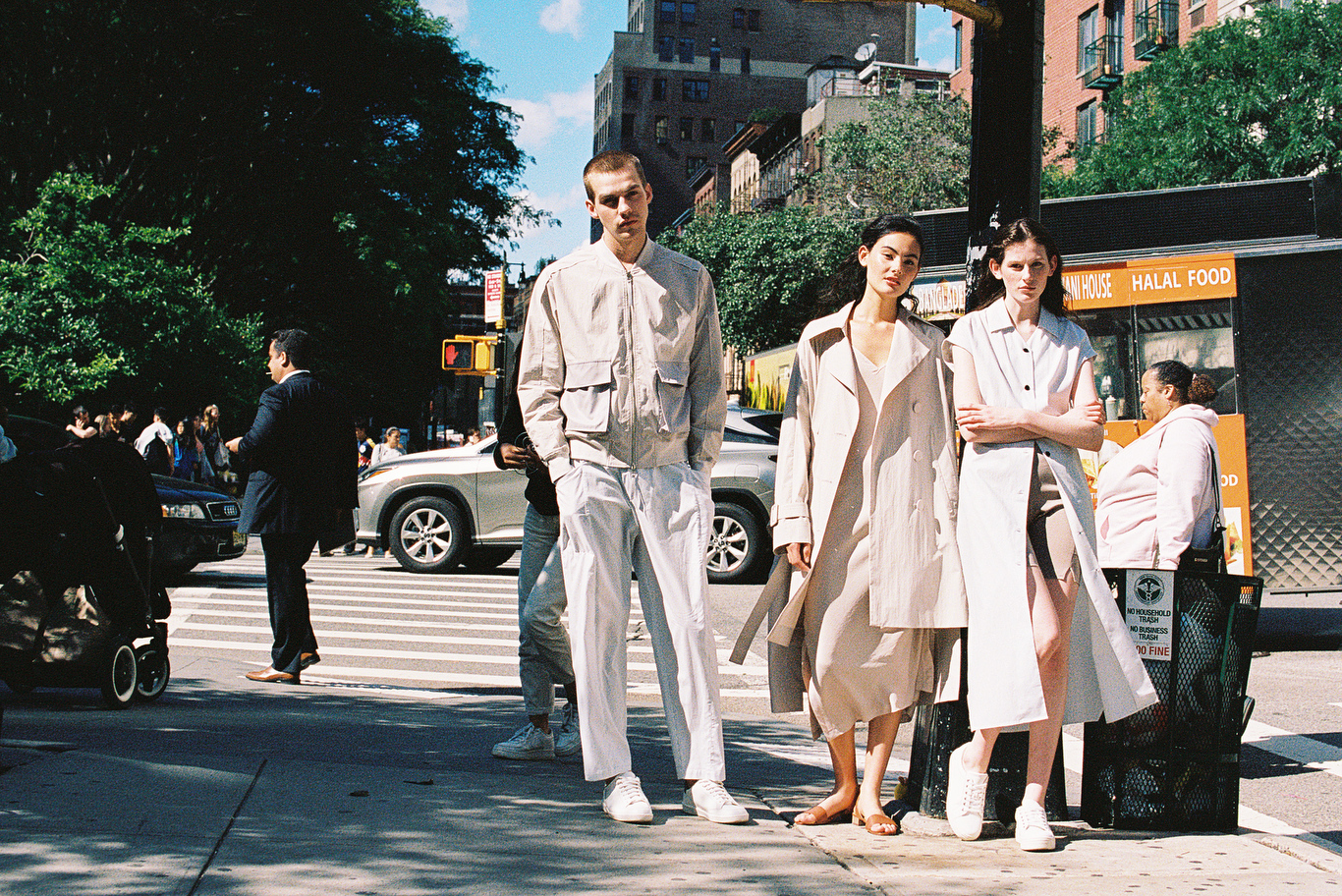 For their second season, this coed New York-based brand specializing in “elevated travel leisure” displayed their “summer sunset” collection in a range of soft colors. Special attention was given to the quality of fabrics, such as organic Supima cotton, and wrinkle-free, quick drying Cupra, plus a lot of detailing throughout. Hidden pockets and zippers are integrated into a modern, chic but comfortable silhouette. The brand plans to open a flagship in Tribeca, and clothing is produced in South Korea. 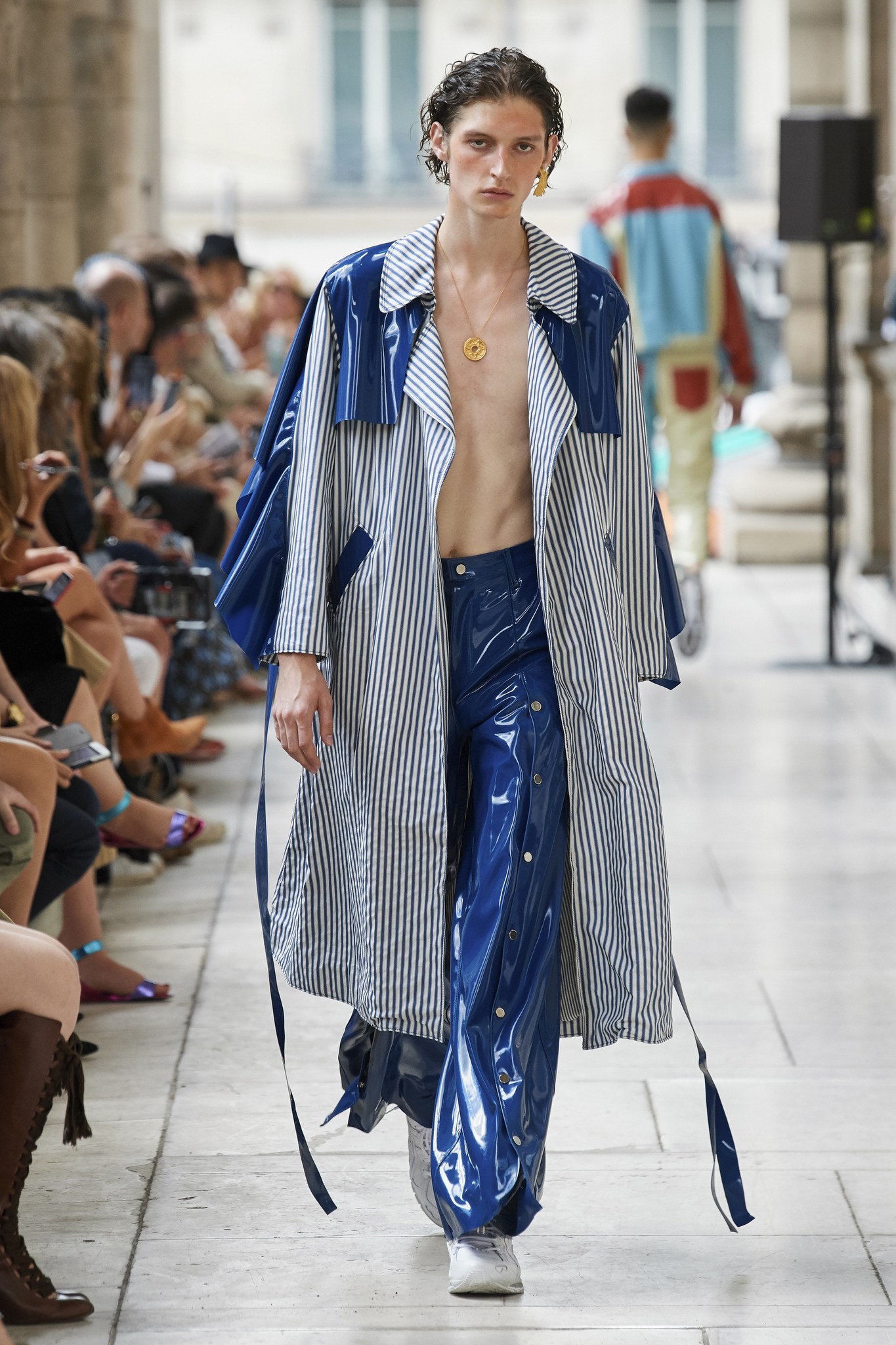 For his fifth collection, Avellano showed a coed collection inspired by the city of Essaouira on the Moroccan coast. He pulled colors from the region, such as blues, reds and yellows. Stripes, present in traditional Moroccan clothing, were a recurring pattern, combined with his signature, unusual use of latex in bright colors, and flowing, tailored pieces. This season, more cotton and knits were added, in tandem with latex, to create wearable and lighter looks in oversize silhouettes. A large trenchcoat in cotton with latex elements, as well as pleated, flowing latex pants, were a few special items. 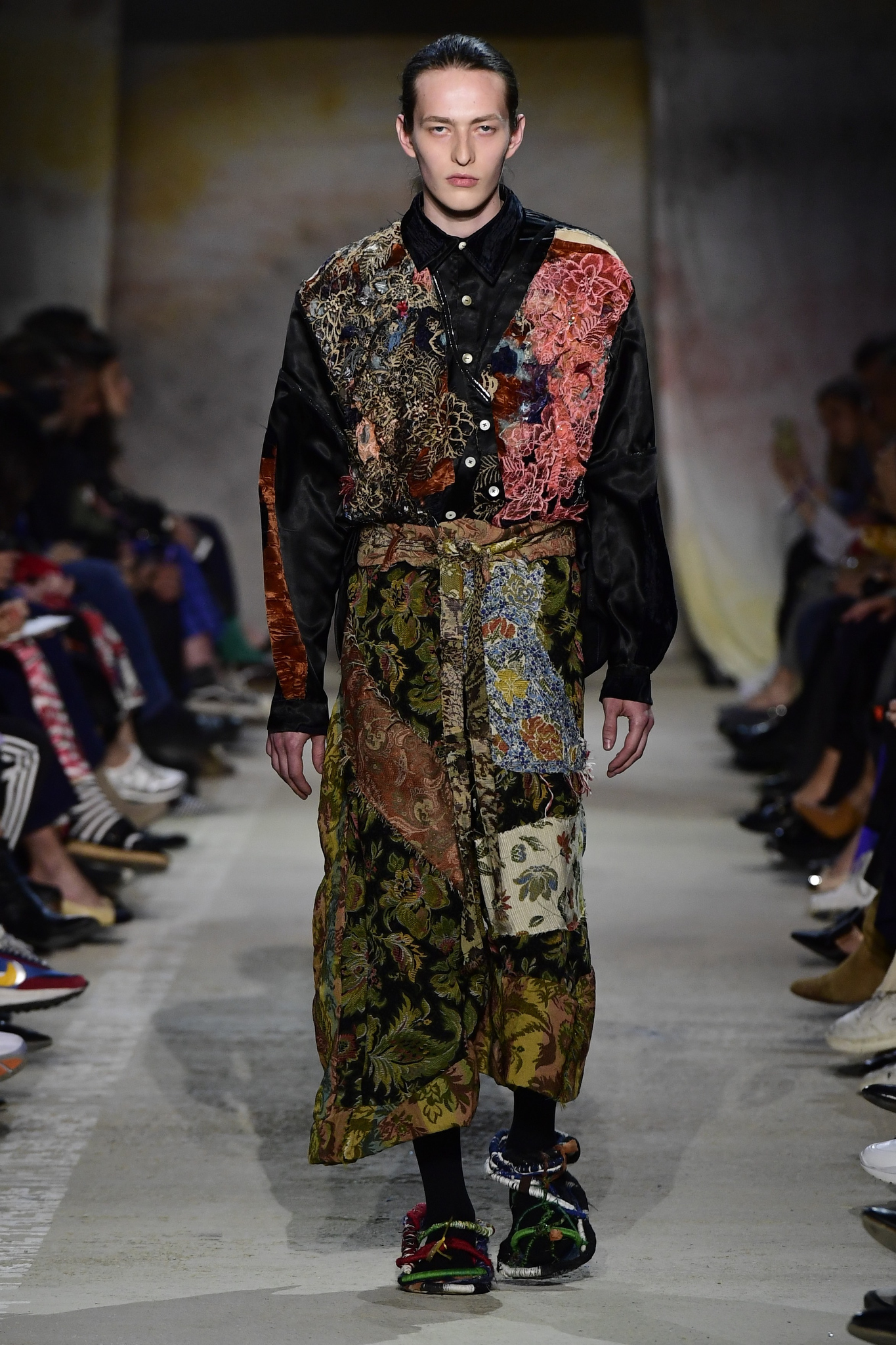 For his first collection, the 25-year-old designer and Hyères Fashion Festival finalist collected discarded vintage upholstery fabric, and worked it into patchworked, asymmetrical, trompe l’oeil and inside-out patterns on unisex silhouettes. “There are a lot of details that we don’t necessarily see, but only the wearer knows about. It goes deeper than the surface,” said Tang. “I put unexpected fabrics together, because I want to surprise myself. The fabric tells a story. It is everything,” he added.