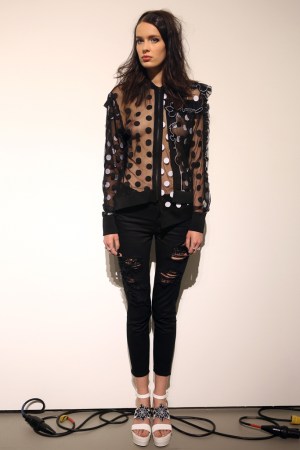 Annelie Augustin and Odély Teboul presented their spring 2016 collection at Mercedes-Benz Fashion Week Berlin in both two and three dimensions. The German-French designers worked with Ellen von Unwerth to create a series of 12 photos of the darkly glamorous lineup. Seven looks leapt from wall to floor, worn by models in two rooms at the Galerie Judin.

Black and white embroidered elements morphed into tattoo-ish graphics — forming birds and blooms on a long dress with cutouts and a chiffon tank and miniskirt worn with decorated leggings. Light and dark dots popped on a sheer ruffled blouse and cascading skirt, while a delicate dress was tiled with thick guipure embroidered spots. Known for crepuscular extravagance, the duo used denim for the first time — black, of course — formed into embellished and distressed cropped jackets, cutoff shorts, and ripped jeans with crystal beaded slashes. “We’re trying to really build some wearable looks,” said Odély Teboul, though she conceded the styles may not quite be for everybody.