The designers went wild with a rebellious streak, showing punk-inspired and over-the-top crystal-studded looks for spring. 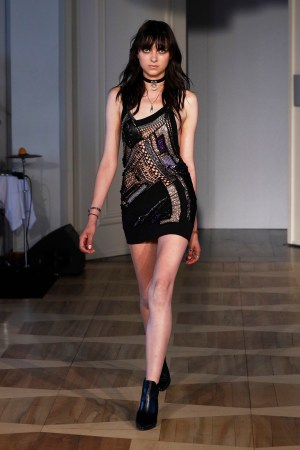 Pop-tinged punk was the impetus for Augustin Teboul’s spring collection. There was also a rebel attitude to Annelie Augustin and Odély Teboul’s design decisions. “A bit more bling-bling, punk glamour, there’s a bit of humor, a bit of ‘too much,’” explained Teboul. “We’re pushing some bad taste, also.”

The pair have always been fans of embellishment and crystals, but this season support from Swarovski gave them free rein to bedazzle with abandon. Donut-shaped jet beads were layered directly over large metal eyelets, crystal mesh panels were patchworked into leather bike shorts and beading glittered appealingly from slashed black denim jeans. Other highlights included studded and crystallized leather Leader of the Pack biker jackets, some bolero cropped, and ornate cutout bathing suits perfect for Goth-style Bond girls.

In a first, the show closer was a white-gowned bride. “Well, we always had a bride,” clarified Augustin. “She just was in black.” This too was rooted in the spirit of spontaneity the duo claimed for the collection: They’d received an accidental delivery of white materials from Swarovski and decided to make it work.

These new directions aren’t the only upsets in store at Augustin Teboul, whose dark confections have been a highlight of the Berlin scene for several seasons. But exactly how the brand plans to change is unclear. “You will know when you have to know,” Teboul said. After all, what good’s a rebellion if it doesn’t take one by surprise?