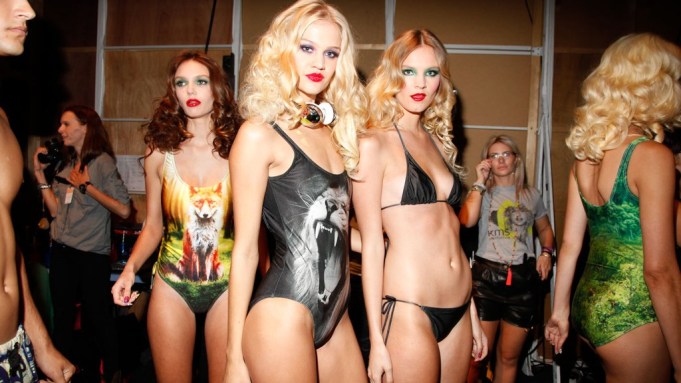 Wrapping up in Sydney on April 12, three weeks ahead of its regular time slot, Mercedes-Benz Fashion Week Australia’s spring 2013 edition was staged at the event’s first new venue in a decade: Carriageworks, a repurposed 19th-century railyard.

Around 2,000 local and international visitors registered, up 11 percent on 2012. They saw 150 brands, spread across 45 runway shows and presentations at the IMG Fashion-run event, in addition to the Premiere trade show, which is operated by Informa’s Australian Exhibitions and Conferences and was located alongside MBFWA for the first time this season.

Although some missed the Sydney Harbour backdrop of the previous Overseas Passenger Terminal venue, overall visitors and exhibitors — at least those who staged runway shows — gave the new location the thumbs up for its size, facilities and edgy, industrial vibe.

“There were some incredibly strong shows and collections, with highlights including great structured dresses, separates, lace and, of course, lots of swimwear,” said Matches contemporary buyer Suzanne Pendlebury.

“When it comes to swimwear, they [Australians] just knock it out of the park — they have the colors, the prints and the personality,” said Shopbop contemporary apparel buyer Jenny Fuchs, who said she hopes to pick up two or three new brands from this trip. These would add to the 30 Australian brands already stocked by Shopbop, one-tenth of the site’s brand portfolio.

“I was really impressed by just the amount of talent that we found,” noted Stylebop fashion director Leila Yavari. “It was a really fun week from designers such as Romance Was Born, a really whimsical, colorful collection, all the way down the line to Christopher Esber, which was more restrained and conceptual. They [local designers] are very much about urban sophistication, so I think it’s really misleading to think of Australian brands as [just] being more beach or super relaxed.”

E-tailers like Stylebop, Shopbop, My-wardrobe and Net-a-porter now dominate MBFWA’s international buyers list, and they are heading to the event with a dual mission in mind: to source new product and to research their exploding local customer bases.

Online retail is booming in Australia, with sales growing 27 per cent to 13 billion Australian dollars, or $13.58 billion at January exchange rates, in the 12 months to January, compared with 0.4 per cent growth experienced by traditional retail, according to the National Australia Bank Online Retail Sales Index. Fashion/department stores/cosmetics/online auctions account for the biggest percentage of sales — 48 percent — and international retailers have been having a bonanza.

A number of international e-tailers have discovered that in spite of its relatively small population of 22 million, Australia has emerged as a key international market. In some cases, Australia is their number-two (ASOS, My-wardrobe) or number-three (Net-a-porter, Matches) market. The strength of online shopping stems partially from the tardiness of many Australian retailers to move into the online space until relatively recently, the strong Australian dollar and the controversial one thousand Australian dollar [$1,045] Goods and Services Tax-free threshold on imported goods.

“It does surprise us to be honest because we haven’t actually been buying with an Australian customer in mind, it’s just organically happened, and now we really think we’re going to be able to take it further by really trying to understand our customer here,” said My-wardrobe buying manager Georgina Coulter, who admits to having been “gobsmacked” when she was recently shown a list of My-wardrobe’s top 10 best-selling items down under, only to find every item was black.

“It does make it harder for us in terms of being based in the U.K., and it’s something we have to really work with the Australian designers on,” said Coulter. Yavari noted, “We’re a luxury e-commerce site, so we’re not looking for a bargain, we’re looking for quality, and I think that’s what we found.”

Not all went smoothly at the shows, however, with the Premiere experiment experiencing teething problems.

Requiring 42,480 square feet of space, AEC’s two-year-old boutique trade show could not be accommodated within the main Carriageworks venue and had to be staged inside the adjacent Blacksmith’s Workshop pavilion.

Although attracting 1,553 visitors — more than double the volume of the traffic of Premiere’s spring 2012 event — the show wound up essentially sidelined from the MBFWA buzz, disappointing a number of exhibitors. A group of them went to the organizer’s offices on day two to complain about slow foot traffic and no Internet, food or beverage facilities, threatening a walkout and demanding refunds.

“It absolutely should stand up, and I’m floored that it hasn’t,” said AEC managing director Harvey Stockbridge, who has a three-year contract with IMG Fashion to stage Premiere at Carriageworks. “We need to take a very close look at all aspects and see how we can make it work.”

The jury is still out on MBFWA’s timing. Moved forward this year to address concerns that the traditional May time slot was too late, some designers and exhibitors would like to see it moved further forward to March or even February, immediately following the Paris fall shows. Others would like it moved back to June as a resort showcase.

Whatever the timing, the event’s value in the eyes of international buyers has more to do with deliveries, than seasons.

Added Matches’ Pendlebury: “We find increasingly that many of our designers now offer multiple collections throughout the year outside of the traditional fashion seasons as our customer seeks constant newness. Our buying schedule reflects these changes.”