The company anticipates its custom-tailored women's wear offer could account for 30 to 50 percent of its business within 12 to 18 months.

Launched on Wednesday, a look book for the company’s new custom-tailored women’s division shows around 20 different styles of women’s jackets, trousers and skirts.

Customization options include more than 250 different fabrications, 60 different button types and nine styles of lapel, plus a variety of different stitching and lining options.

All orders will be placed through the InStitchu.com e-commerce store. The women’s wear will also be available through almost all of InStitchu’s 12 physical showrooms in Australia and New York. The one exception is the company’s new concession within the men’s department of the David Jones’ department store chain’s newly refurbished Elizabeth Street, Sydney flagship. The physical showrooms, an adjunct to the online business which commenced opening within a year of the company’s 2012 launch, now account for 70 percent of the business.

“Internationally we’re seeing more women embrace tailored garments and we’re thrilled to offer our premium service to what we believe is an under-serviced market,” said InStitchu cofounder Robin McGowan. “More and more women are looking to purchase custom tailoring for both work and weekend wear and the existing options are very limited, in terms of the range and price.”

In development for eight years and tested on staff, family and friends for the past 12 months, women’s wear was originally due to be launched in late March, but was put on ice due to the coronavirus crisis. The company anticipates women’s wear could account for 30 to 50 percent of its business within 12 to 18 months, according to cofounder James Wakefield.

Also delayed due to COVID-19 were the openings of the company’s latest three showrooms: the David Jones concession, plus a new showroom in the Sydney suburb of Woollahra and the company’s first London showroom, a 100-square-meter space that had been due to open on Long Acre, Covent Garden on April 1, but which has been indefinitely postponed.

The company closed its nine Australian showrooms and the New York showroom on West 24th Street on March 27.

While the New York showroom remains closed, the company reopened its Australian showrooms on May 15. 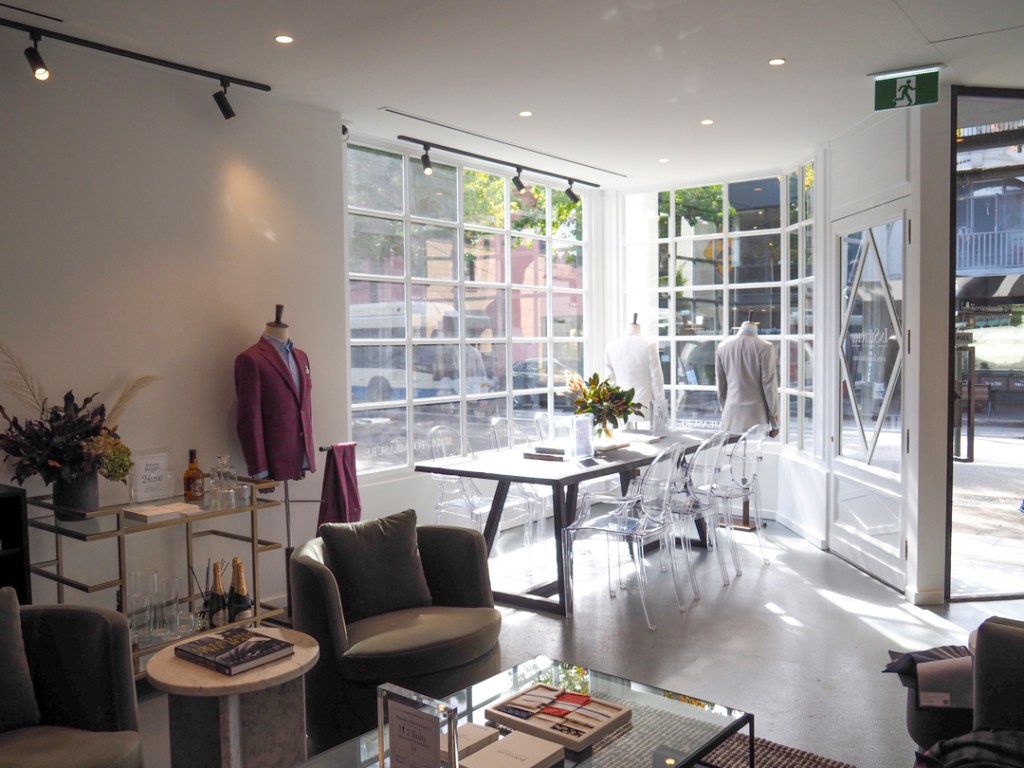 InStitchu’s latest showroom, in the Sydney suburb of Woollahra, which opened on May 15.

New health and safety measures include temperature checks for staff prior to every shift, with showroom numbers limited to one person per 4 square meters, as per government regulations.

There are hand sanitizer stations at the entrance of every showroom, which customers must use prior to entry, as well as optional disposable gloves and face masks made available.

At the peak of the crisis in April, the company’s overall business dropped 90 percent, according to Wakefield. Sales started to trickle back from early May, once the government flagged a three-step plan for restarting economic and social life across the country, including a staged lifting of the number of guests allowed at weddings.

“We always knew that sales would recover but what we also know is that there will be a lot of businesses that don’t make it out of the crisis,” said Wakefield, who believes the company’s lean business model — with little stock on hand and a focus on destination retail, as opposed to malls — is helping it weather the crisis.

“As sad as that is, we’re excited by that opportunity. The InStitchu value proposition is so strong that we do feel like a lot of these customers will choose to shop with us.”