Ninety percent of Christoph Rumpf's collection was created with repurposed fabrics and details, such as Persian carpets or beaded trims from belly-dancer costumes.

HYÈRES, France — Will his be the next fashion fairy tale?

Austrian designer Christoph Rumpf scooped the Première Vision Grand Prize at the 34rd edition of the Hyères International Festival of Fashion and Photography, which wrapped on Sunday, winning over a jury headed by Chloé creative director Natacha Ramsay-Levi.

Rumpf, who is in his fourth year at the University of Applied Arts in Vienna, came up with a rich men’s wear collection of oversized shapes and multitextured pieces created entirely with upcycled and dead stock material, mostly found at flea markets in Austria and France.

Ninety percent of the collection was made of repurposed textiles, such as Persian carpets, Lurex jacquard and pristine cotton, embellished with beaded trims from old belly-dancing costumes, crystal pendants from chandeliers and bone jewelry sourced on various market stalls.

“The real challenge for a designer nowadays is to know where his fabric comes from,” said Rumpf, whose internship under British designer Craig Green was visible in some of the more voluminous silhouettes, held up by intricate darting and internal constructions.

For one of his looks, an angular suit with exaggerated shoulders assembled by stitching pieces of carpet together, the 24-year-old pointed out a sturdy structured waist holding the construction, the secret to making stiff furnishing textiles fit around the body shape. 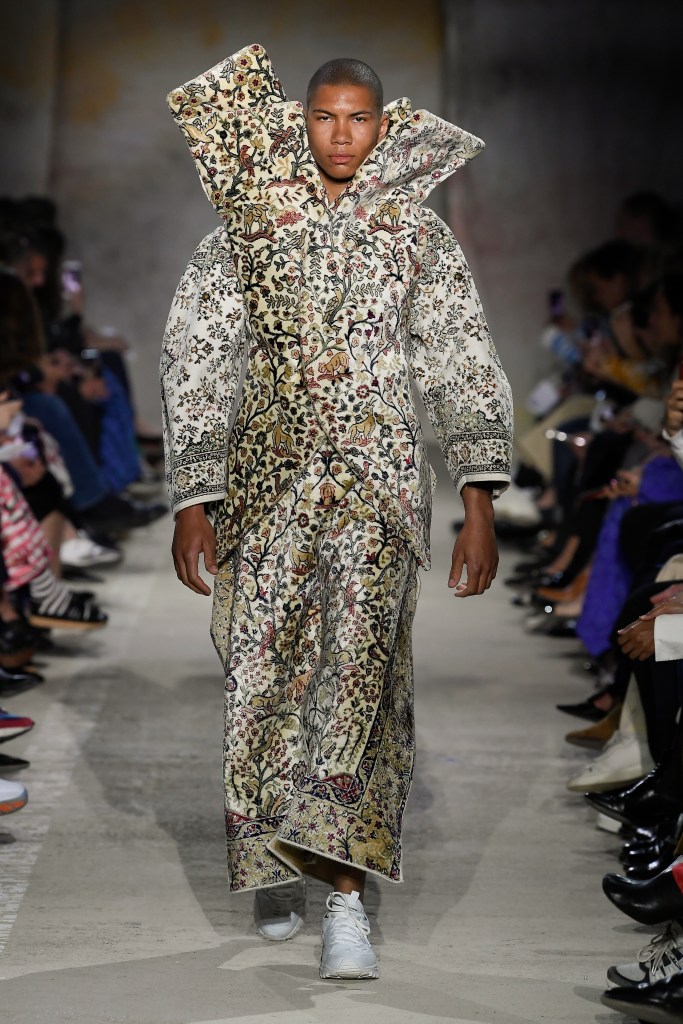 The Première Vision Grand Prize is valued at 20,000 euros, or around $22,300. The designer will also be given the opportunity to undertake a project with the specialty ateliers that Chanel controls through its Paraffection subsidiary, a prize valued at up to 20,000 euros.

He will also receive a 10,000-euro grant from Petit Bateau and get to produce a capsule that will be manufactured and sold by the brand. Finally, the Hyères winner is invited to present a fashion show at the next Mercedes-Benz Fashion Week in Berlin.

Ramsay-Levi, who was attending the buzzy fashion festival for the first time, carefully selected her jury members to best re-create the environment to which a designer will be confronted.

“I said to myself, if I myself was a finalist, who would be interesting for me to meet?” said Ramsay-Levi, who was named creative director of Chloé in 2017 after 15 years working alongside Nicholas Ghesquière, first at Balenciaga then at Louis Vuitton.

“If tomorrow these finalists launch their own label, they will have to work with art directors for their collection, be judged by journalists who will write articles about them, collaborate with stylists.…I wanted to present a sample of all the different professions they will be confronted with.”

For the second year running, a graduate from HEAD Geneva fashion school was awarded the Chloé Prize, a grant of 20,000 euros created in 2012 by the fashion house, also a sponsor of the festival.

Swiss-Chinese designer Tina Schwizgebel-Wang was inspired by the process of tattooing both for her Hyères men’s wear collection, titled “Inked,” and the silhouette, which paid homage to the heritage of the French fashion house she submitted for the Chloé prize: a leather belted apron decorated with an allover motif over a flowing silk shirt and trousers, held together with silver safety pins. 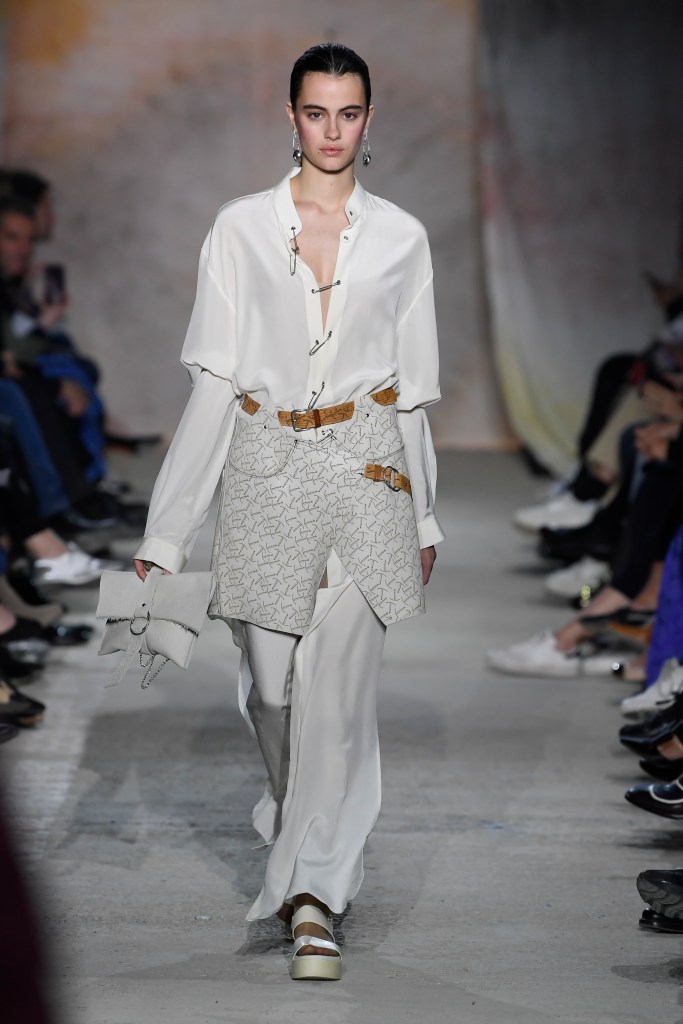 This year’s edition unveiled a third fashion prize, the Métiers d’Arts Prize in partnership with Chanel, which went to Irish designer Róisín Pierce for her broderie anglaise headpieces — one of them inspired by a melting ice-cream cone — created in collaboration with Chanel Métiers d’Arts millinery Maison Michel. Pierce, who also won the public’s vote for her collection, received a grant of 20,000 euros to make a new creative project to be shown at the 2020 edition of the festival.

The fashion jury gave an honorable mention to Japanese trio Tetsuya Doi, Yota Anazawa and Manami Toda for their “Polomani” collection, made up of upcycled suits and polos bringing together the aesthetics of two iconic Nineties labels, Polo Ralph Lauren and Giorgio Armani. Finnish designer Milla Lintilä was chosen by the Galeries Lafayette brand to create a capsule collection to be distributed in selected stores from the retailer’s network as well as on its web site.

The Accessories award, now in its third year, went to Spanish designer Noelia Morales’ inclusive lingerie line, including a mastectomy patch embroidered with Swarovski crystals made in homage to women having had to undergo breast-removal surgery.

“What really struck me in this year’s selection of finalists was that every project had a real meaning, whether it be a sustainable aspect or a human side,” said jewelry designer Charlotte Chesnais, who presided over the jury. The award comes with a 15,000 euro grant from Swarovski as well as the opportunity to undertake a project with Chanel’s Métiers d’Art for a value of up to 20,000 euros. 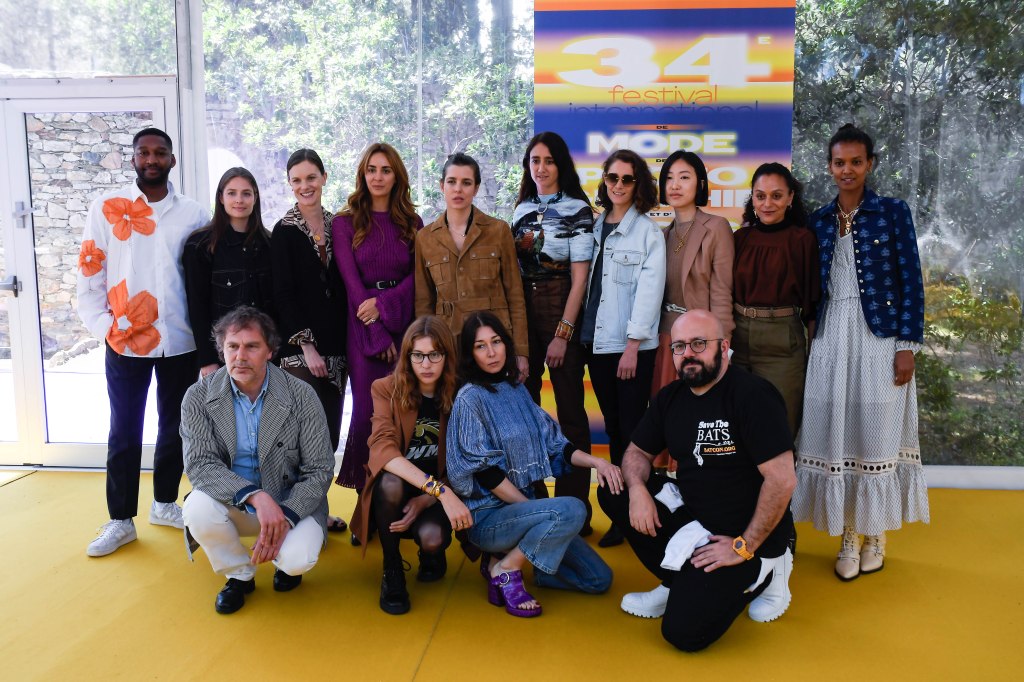 The fashion jury for the 34th edition of the Hyères Fashion Festival.  Giovanni Giannoni

Hyères prizewinners have a deep-rooted history of success stories behind them. The festival has served as a springboard for designers including Paco Rabanne’s Julien Dossena; Viktor & Rolf’s Viktor Horsting and Rolf Snoeren; Saint Laurent’s Anthony Vaccarello, and last year’s Grand Prize winners, Rushemy Botter and Lisi Herrebrugh of Dutch duo Botter, who were named creative directors of Nina Ricci a mere four months after winning Hyères.

The duo — which, following the festival’s tradition, also served as jury members for this year’s edition — still felt like Hyères’ true stars, their spotlight somewhat eclipsing this year’s finalists.

Walking round the Villa Noailles, where the festival is based, Botter and Herrebrugh were met with gushing festivalgoers congratulating them on their already impressive career trajectory, and looking forward to the presentation of the label’s first official ready-to-wear collection during Paris men’s week in January 2020.

Their special collection for Hyères, created in partnership with the Chanel specialty ateliers and presented after the finalists’ group show at the festival, reminded the audience just how high the Antwerp label has raised the bar.

Unsurprisingly, their success story was the leitmotiv of the festival’s 34th edition, whose highlights included a over-18-only art exhibition at the newly acquired Villa Romaine; decadent floral sculptures by Parisian florist Debeaulieu; a wild Chloé party in the gardens of the Hotel Provençal, and installations by the three jury presidents, Ramsay-Levi for fashion, Chesnais for accessories and Craig McDean for photography.

“This competition might just change this year’s finalists’ lives,” said Hyères festival founder Jean Pierre-Blanc during the opening speech of the event on Thursday, gesturing proudly to Botter and Herrebrugh standing shyly behind him.

“To have a Hyères winner nominated at a big fashion house four months later and deliver such a beautiful show — that’s something I wish to everyone,” Blanc confided later during the festival, adding that each edition costs 2 million euros, or around $2.2 million, to produce. “Although it’s good that it’s not always as spectacular. Other nominations of finalists, like Julien Dossena taking over creative direction at Paco Rabanne, took more time and effort — which is a bit more like real life.” 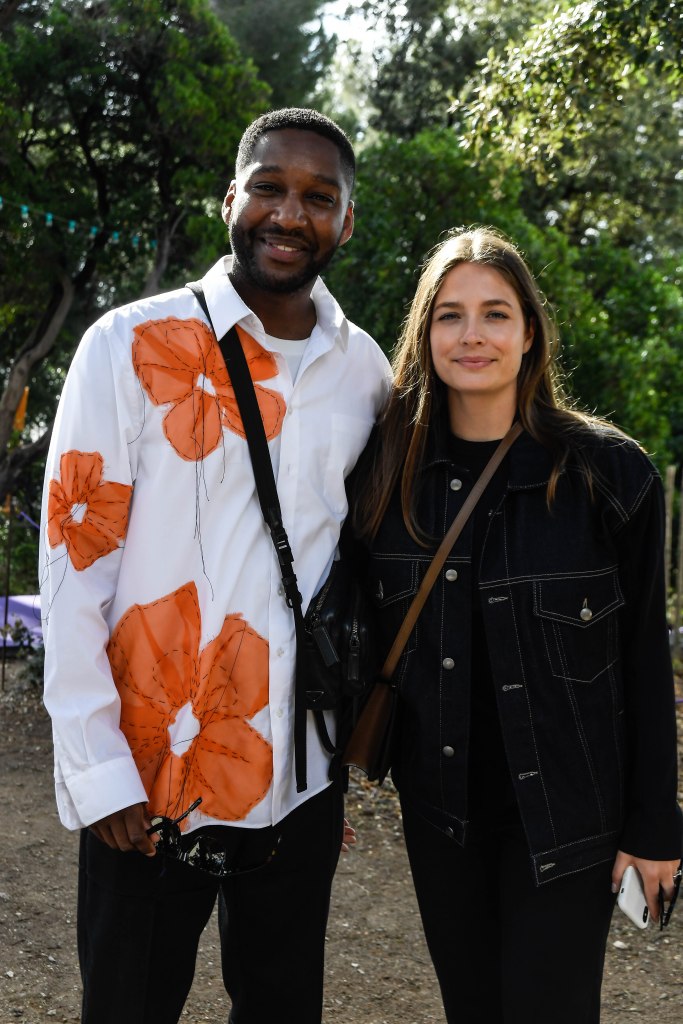 But the idea of joining a major fashion house might not be as exciting as it once was.

When asked what their future plans were, a majority of the fashion finalists firmly revealed their intention to launch their own brand, with some of them, such as Tsung-Chien Tang from Taiwan, planning on launching their label as soon as the festival is over.

“Botter’s nomination at Nina Ricci has shown young designers that everything is possible,” said Ramsay-Levi. “But I didn’t feel like any of the finalists we met dream of working for a big brand. What’s interesting about Botter is that they have kept their own brand in addition to their work at Nina Ricci. They are intent on continuing to express their own identity.”

In an era governed by self-expression on social media and the rise of alternative business models such as direct-to-consumer initiatives, traditional luxury brands are no longer seen as the Eldorado they once were.

“This generation of designers is a lot less fascinated by big luxury groups,” mused Hervé Yvrenogeau, director of the Fashion Design bachelor at the Institut Français de la Mode. “It’s a new phenomenon. They are more interested in trying their luck by doing their own thing, whereas a couple of years ago the ultimate goal was to be nominated at an established brand. They want a better life: the goal is above all to be creatively fulfilled, rather than success in the traditional sense of the word.”

This desire is also linked to growing panic about the impact fashion has on the environment: sustainability, in the form of upcycled garments and textiles, was present in five out of the ten selected projects at the festival. For these designers, launching their own brand would mean working in compliance with their own personal convictions.

“Young designers today are fully conscious that the world urgently needs to change and have integrated sustainable ideas directly in the act of creation,” continued Yvrenogeau, noting that there was a post-apocalyptic tinge to some of the collections shown at Hyères. “Their biggest challenge will be to manage to stay creative despite all these new self-imposed limitations, such as choosing to only work with upcycled fabric.” 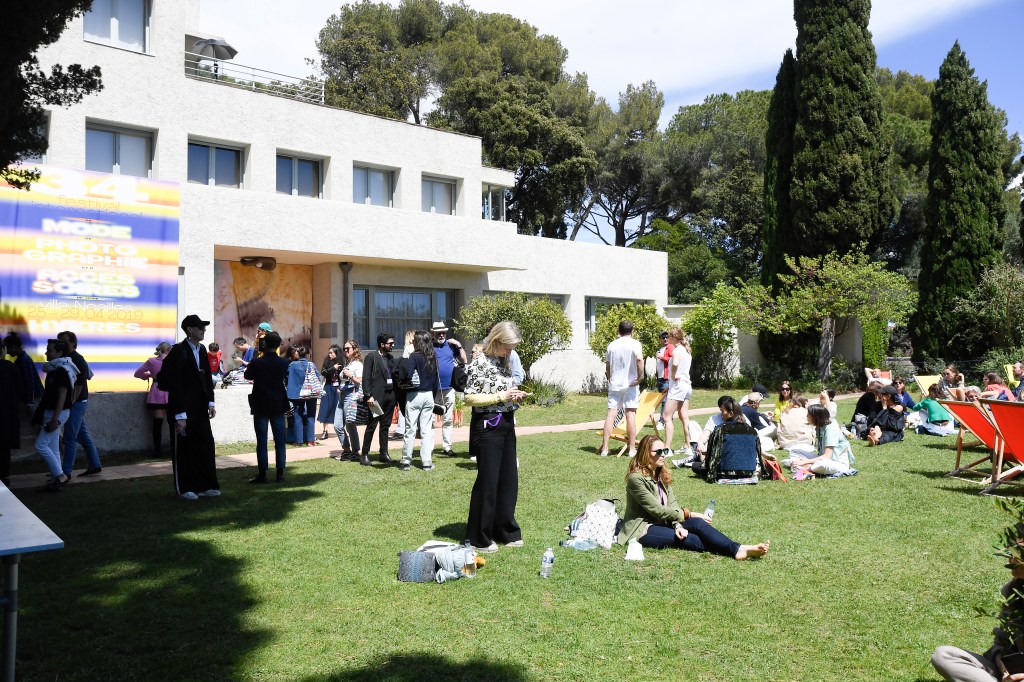 The Villa Noailles in Hyères, South of France.  Giovanni Giannoni

In order to help fledging initiatives find their ground, a number of round tables were organized by the Fédération de la Haute Couture et de la Mode during the festival, as part of the 19th edition of the Rencontres de la Mode. One of them, manned by AMI chief executive officer Nicolas Santi-Weill, focused on the innovative business models chosen by emerging brands.

The new generation of designers needs to be aware that designing is only one side of the job, according to Rok Hwang, one of the panelists in the talk, who won the LVMH Special Prize in 2018 a year after the first collection of his rtw label, Rokh.

The London-based designer, who presented his first fashion show during Paris Fashion Week in March, stressed how much he had learnt during his one-year mentorship delivered by Sophie Brocart, ceo of Jean Patou, which he was awarded alongside the 150,000 euro grant delivered by the LVMH Prize jury.

“Creating and running your own brand is a great experience and I wouldn’t stop anyone from doing it,” said Hwang, who is planning to open an atelier in Paris in the near future. “But the challenge will always be on the business side: you need to find funding, learn how to sell your product, navigate legal issues such as intellectual property… It’s not just about designing: Sophie really helped me shape the business.”

The second part of the round table featured just the right people for the job. Alongside Alexandre Guillo, director of partnerships for business accelerator BPI France, and David Kang, founder of concept-store Tom Greyhound, Stefano Martinetto, president of showroom-turned-business-developer Tomorrow, is the new investor in Coperni, the just-relaunched label by former creative directors of Courrèges Arnaud Vaillant and Sébastien Meyer.

“Arnaud and Sébastien became creative directors of Courrèges at only 24 years old — how could you say no to that?” said Martinetto, who is also an investor in edgy men’s wear brand A-Cold-Wall. “I advised them to keep their own label Coperni, but they chose to close it to focus on Courrèges. Two years later, they realized they didn’t like the corporate culture and left the house.

“Launching a new brand has never been easier than today,” he continued. “With the Internet and social media, designers can talk directly to consumers. But some small brands can feel like they can’t cope with sudden growth, and need investment to get to the next level. Now Coperni is back on board again, this time with Tomorrow as a partner.”