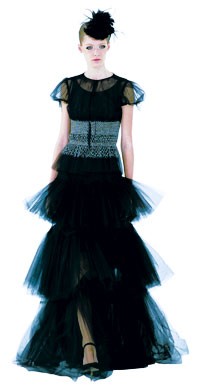 Toujours couture? Maybe oui, maybe non. But some masters of the milieu refuse to let it go down without a fight. In vastly different presentations, Karl Lagerfeld and Valentino made rock-solid cases for its validity, Lagerfeld with a bold, antifluff statement at Chanel and Valentino with wonderful, wearable indiscretion.

To acknowledge Lagerfeld’s ongoing mastery of high chic art-and-commerce is to engage in redundancy, as, season after season, in ready-to-wear and couture, the man continues to awe: here, a $5 million trunk show; there, a new take on tweed for the world to knock off; here (Paris), there (Hollywood) and everywhere, ultrahip young lovelies desperate to start little Chanel archives of their own.

Lagerfeld revs one of fashion’s mightiest engines with his brilliant combination of classicism and currency. But, were it that simple, the fashion landscape would be one giant rue Cam-clone, populated by commercially savvy artistes turning out endless chic while raking in the cash. Which is clearly not the case. Lagerfeld’s genius lies not merely in his constant pushing of the house standards, but in knowing where to push next. Hence, his current direction. He was at the forefront of fashion’s still-thriving girly craze; early on, he went pink, he went delicate, he went decorated, bejeweled and beribboned, not to mention gently distressed to ethereal effect. And whither Karl goest, so, too, do legions of admiring peers, which led to market saturation of flirtatious pastel tweed.

Now, in his been-there-done-that audacity, Lagerfeld has turned tough, relatively speaking. Last season’s rtw saw boys walk his runway, and, in the couture collection he showed on Wednesday morning, he went not boyish, but gutsy. He now wants his ladies to radiate strength, so adieu, trappings of whimsy, and bonjour, authoritative chic. By day, that meant a palette of black, white and gray, with unsweet beiges and dusty pinks providing pale counterpoint. These came most often in tweeds, which, despite their featherweight construction, once again look sturdy enough to stand up to a brisk autumn wind.

Lagerfeld structured the collection around the notion of “Duo,” and much of what he showed came doubled up: coats over dresses; dresses over dresses; layered skirts; even a tartan tweed suit over a matching dress. For the most part he cut jackets loose and easy and dresses reed-thin, although, no slave to consistency, he also softened up with graceful pleats and even the occasional hem flounce.

For evening, even the most understated Chanelophile likes to glam it up. Karl encourages her to reveal the diva within with an emphasis on black. On the sleek side, a simple cutaway black layered over white looked stunning, but Lagerfeld gave his ladies some fluff via high-volume tulle, in flamboyant tiers and a Pierrot puff over a short lace sheath.

Lagerfeld’s unfettered mood extended to his shoes — delightfully sensible, two-tone, low-heeled Mary Janes. True, his “jewel box” handbag, a major trophy in assorted croc and snake versions, may be something less, or more, than practical. Not so with the fingerless gloves meant to accommodate major rings, inspired by the designer’s own current penchant for flashing multiples of thick silver-and-diamond rings on every finger. That’s taking common sense to haute heights.

While Lagerfeld played to the pragmatic side of the couture customer’s psyche, Valentino went for her gleefully overindulged id. The collection he showed Tuesday evening, he wrote unabashedly in his program notes, is for “important women,” who, he might have added, find extravagance essential and discretion, disgusting.

Val lured his ladies the old-fashioned — yet oh-so-current — way, with more, more, more, in a show that played so shamelessly to the guilty pleasures of greed and lust you couldn’t help but love it. He worked up an incredible array of rich clothes for rich women and presented them as just that. In fact, a few deft twists of styling — de-coiffing, for one — might have taken 15 or so years off the overall attitude. But Valentino doesn’t care. He’d rather coddle the vanity of those cash-able gals on his “important list” than that of editors who, sans appropriate marriage or Megamillions ticket, will never get there.

His soundtrack returned at various times to a fitting refrain, “Diamonds are forever.” So, too, apparently, are frills, furs and glitter, the latter often in crystal- or otherwise-beaded tassels. These swung with haute naughtiness from belts, bodices and hips, decorating Valentino’s invariably curvaceous silhouettes. Almost everything — suits, dresses, gowns — worked the hourglass shape for all it’s worth. Which is plenty, especially when topped with a little fur something in mink, fox or sable. And speaking of fur, not everything was cut for svelte effect. The most notable exception: the glam polar bear of a coat with ruched edges and cinched at the waist in jewels.

The clothes could not have been more elaborate, but the show worked because Valentino held firm to a reality check of sorts, rarefied though it might have been. A client could potentially wear just about anything on his runway, from the relatively low-key brown-and-pink pinstriped suit, worn with a fox bolero, to the croc jacket and lavishly embroidered skirt. Ditto the grandest of his high evening offerings, whether a starkly simple white column or jet-embroidered see-through black tulle gown, although the latter needs a slip for real life.

Of course, it remains to be seen whether even the toniest reaches of real life have passed couture by. In the meantime, the rich and willing might want to race to book fittings now, and stock up before the bell tolls.