Not all the news during this couture season came from made-to-order collections. 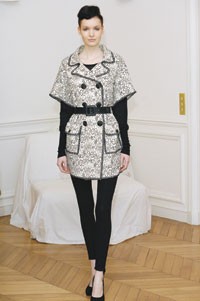 Not all the news during this couture season came from made-to-order collections — some of the smaller ready-to-wear houses had an impact, too.

Adam Jones: Known as a wizard with knitwear, Adam Jones isn’t a man who likes to limit his horizons. And though he continues to experiment with his forte, he also is developing his arsenal. This season, for instance, Jones integrated knitwear into fur coats or blended knits with cashmere in cute little dresses. Other standouts included a fur cape embellished with colorful stones Jones found in India and a knit and chiffon dress dappled with sequins, illustrating that the designer continues to develop his voice in a fetching way.

Lefranc-Ferrant: Alber Elbaz was there to check out the latest effort from his protégé, Mario Ferrant. Ferrant and his design partner, Beatrice Lefranc, who launched Lefranc-Ferrant two years ago, are channeling an upbeat, urban vibe this season, featuring flouncy skirts aplenty. The duo also played tricks with the trench: its sleeves pulled back to morph into a bustier dress in printed percale, or flipped upside down atop a gigantic black tulle skirt. More streetwise options included a pleated silk smock and a bustier jumpsuit, its volume gently bubbling at the back.

Cathy Pill: Young Belgian Cathy Pill refined her experimental flourishes into a fetching and wearable ready-to-wear collection, which she showed during the couture season. She has a knack for prints, which she used in tailored blouses with slit sleeves and a cute floor-sweeping dress. Some of her transformable coats and skirts were a bit tricky. But overall, her fresh looks are evolving in the right direction.