BERLIN — With the opening of the Aveda Institute in Berlin, the plant-based hair and beauty brand finally has a Haus to call its own. 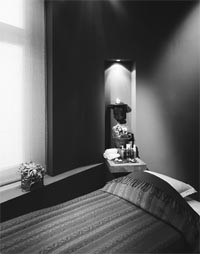 BERLIN — With the opening of the Aveda Institute in Berlin, the plant-based hair and beauty brand finally has a Haus to call its own.

This story first appeared in the November 21, 2003 issue of WWD. Subscribe Today.

Located on a prime stretch of Kurfürstendamm here, the new two floor, 2,375-square-foot institute features the full range of Aveda products, a men’s hair cutting-barber corner, a hair salon with 18 styling stations and an adjacent balcony, plus a chakra room for Aveda signature spa treatments.

While its natural textures, muted tones and open spaces create an inviting and comfortable environment for beauty consumers, Aveda’s main Berlin focus is on inspiring and instructing its professional salon customers. For the institute has an important additional role as the Berlin Academy.

Every month, on Sundays and Mondays, the institute is transformed into a learning center for hairdressers, offering courses such as Connecting Color & Cut and The Art and Design of Creative Color for up to 14 professional participants. The Berlin Academy is the fourth such Aveda learning center, joining training facilities in London, New York and Minneapolis.

The Berlin institute “is our first significant step in supporting our (German professional) network,” said Dominique Conseil, president of Aveda. “We offer a forum of creativity and learning possibilities, and even create two annual (hairstyle) collections at the Berlin Institute, which is good for Germany and enriches us internationally.”

Aveda is not new to Berlin, where an independent retailer operated two Aveda doors, now closed. Nor is it new to the German market, where a distributor ran the local business for about 10 years until Estée Lauder Germany decided to take the business in house two years ago. Since then, turnover has doubled and the Aveda salon and spa network has expanded to 175 salons in German-speaking Europe, including 60 exclusive Aveda Concept salons.

That network could conceivably grow to 500 salons, according to Nicole Kremer, Aveda brand manager in Germany who sees the Berlin Institute as a primary instrument to help the company to achieve this goal.

“Before we were just trainers on the road, now we have a roof over our head,” Kremer commented. “This institute is a prototype for our [Aveda] lifestyle salon concept. We’re trying to attract other salons to take this concept into other cities. This facility in Berlin will help them actively understand what before we could only explain,” she said.

Aveda’s focus on salon distribution is also linked to its service philosophy. “We want to associate ourselves with professional people who know the culture of the hair and body, and can recommend the right products to their customers. And we want to treat these people well,” Conseil said.

Aveda founder Horst Rechelbacher “created retail products because he saw retail products as a financial path to independence for salons,” he explained. “The addition of a well-run retail business helps [salon owners] a lot towards financial sustainability and sets us apart from normal retail brands.”

But salon owners get nervous, he noted, when it is suggested they could make 30 percent of their turnover through retail. “They worry and say we don’t want to turn into a store, but Aveda retail is an engine on a machine that works by itself. It doesn’t require much attention, and making them realize this is our mission.”

“Salons usually do 5 percent of their business with retail,” Kremer added. “But if they focused a bit more on retail, they could earn revenue to put back into their businesses, and refurbish their salons every two years.” While neither executive would talk numbers, industry observers estimated that the Berlin facility cost about $1 million. Conseil and Kremer noted that the Berlin store was a larger investment than a hairdresser would normally have to make, because of the institute’s additional academy functions and its 1A (or top) location.

Like all Aveda lifestyle salons, Berlin was designed with an ecological eye. The company makes it a principle to source as locally as possible, which here meant wood floors made of glued together cherry scraps left over from furniture manufacture, grass fiber on the walls, cabinets constructed of reclaimed oak, and recycled asphalt transformed into the tiles on the ground floor.

“We aim to create a corporate ID for the retail part of the salon through our shelf systems and displays, but leave [salon owners] their creativity for the rest,” said Kremer. “But it’s never a requirement,” Conseil quickly added. “We don’t dictate, and we’re not a franchise with a cookie-cutter approach.”

Conseil said Germany currently contributes about 15 percent of total sales, declining to be more specific. America is still driving Aveda’s growth, “and could double or triple in size. It has tremendous potential,” he said, “but as we get more focused on international development, we’ll see that piece grow.”