Richard Avedon's groundbreaking portrait exhibit, "In the American West," was both vilified and praised when it opened 20 years ago at the Amon Carter Museum here. 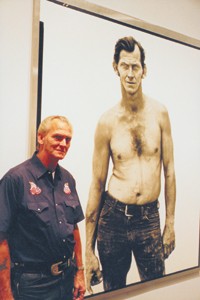 FORT WORTH, Tex. — Richard Avedon’s groundbreaking portrait exhibit, “In the American West,” was both vilified and praised when it opened 20 years ago at the Amon Carter Museum here.

A critic for the Fort Worth Star-Telegram derided the black-and-white photos of small-town working people and drifters as “perverse,” and visitors complained that the photo subjects appeared to be “low class” and “ugly.”

Still, thousands of people crowded the museum to view the stark images, and some art critics also celebrated their humanity and impact in helping to shatter stereotypes of the West.

Now, a year after Avedon’s death, the museum again has mounted the landmark exhibit, displaying 78 of the 124 images it commissioned Avedon to shoot from 1979 to 1984.

“It will not be as controversial now, in part, because these images have entered our visual vocabulary, and in a way it is like seeing an old friend,” said John Rohrbach, the museum’s senior curator of photographs. “Yet some are not easy to look at.”

Avedon’s stark images portray housekeepers, miners, bartenders and roughnecks, among others, in excruciating detail. Using an 8-inch-by-10-inch Deardorff camera and with meticulous shading in the dark room, every scar, stain, wrinkle and blemish is evident. Avedon typically shot his subjects at the end of the day, when soot from the mines, blood from the slaughterhouses or fatigue was thickest.

Renowned for his fashion and celebrity photography, Avedon sought subjects in 189 small towns in 13 western states. Each was photographed outdoors standing in front of a white backdrop that had been taped up, often on a barn or warehouse.

Most of those who sat for Avedon had no idea of his prominence. Only one person out of hundreds turned him down, recalled Laura Wilson, a Dallas photographer who worked with Avedon on the project. Wilson went on every trip, sometimes bringing her three young children — Andrew, Luke and Owen — now Hollywood’s Wilson brothers.

Two years ago, at Avedon’s request, she published a book about the making of “In the American West,” called “Avedon at Work: Photographs by Laura Wilson.”

She wrote that Avedon said, “‘I am looking for a new definition of a photographic portrait. I’m looking for people who are surprising, heartbreaking or beautiful in a terrifying way. Beauty that might scare you to death until you acknowledge it as part of yourself.”‘

The photographs have been put back on display at the insistence of museum members and other visitors, Rohrbach said.

And, he said, “I’m selfish….I wanted to see what it was like where one had to deal with room after room after room of these people. I say ‘these people’ quite deliberately because yes, these are photos, but many are staring directly at the camera and, therefore, at you. You are being pulled in to engage with these sitters very directly, and I wanted to experience that.”

Running through Jan. 8, “In the American West” also will travel to the Columbus Museum of Art in Ohio; the Center for Creative Photography in Tucson, Ariz., and the Iris & B. Gerald Cantor Center for Visual Arts at Stanford University.

“It’s a very, very important body of work because he didn’t turn away from the realities of their existence,” Wilson said. “He was working with themes that are still of concern today. What happens when there is unemployment for a whole town? What does someone’s face look like who has been told after 22 years of hard work that there is no more work?”

The project still resonates with many of those who were photographed, some of whom viewed the portraits at a preview this month.

“Every time I see it I see something different,” reflected Billy Mudd, who was taking a break from driving a truck at an oil rig in Alto, Tex., in 1981 when Avedon captured him, shirtless. “These are the small people of the world — the little bitty people — but they’re the ones who make the world go ’round.”

Gazing at his own portrait, Mudd said, “I never realized I had so many scars on my body.”

One of the best-known images is that of 13-year-old Boyd Fortin holding an eviscerated rattlesnake. Avedon found him in the skinning pit at the annual Rattlesnake Roundup in Sweetwater, Tex. Fortin, who learned to skin a snake around the age of nine, said he liked going to the roundup because he often got his picture in the newspaper. When Avedon asked to take his portrait, he didn’t hesitate.

Now an environmental engineer in the oil industry, Fortin said he vividly remembered his three sittings with Avedon on a cold March day. “He said, ‘Stare straight into the camera and close your mouth, and I want to see no facial expression whatsoever.'”

Avedon remained in contact with many of the photo subjects, periodically sending them books of his work and letters, and speaking with some on the telephone.

“He invited me three times to go see him in New York, and I regret that I didn’t go,” said Rita Carl, who was studying law enforcement when Avedon photographed her in 1979 at the rattlesnake roundup.

Wilson was with Avedon when he died of a stroke in San Antonio on Oct. 1, 2004. He had been photographing burn victims and soldiers at Fort Hood for a series called “Democracy” commissioned by The New Yorker magazine.

His last words, she said, were about the people he was photographing. “He had such empathy for the burn victims, and that’s what he spoke about at the end — how hard it was seeing them, and how he felt about them.”