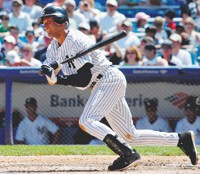 NEW YORK — Derek Jeter is out to take his grooming regimen to the American masses.

The captain of the New York Yankees will step up to the plate for Avon this fall with his very own men’s fragrance, Driven. The fragrance, which industry sources estimated could do between $10 million and $15 million in retail sales in its first year, will be followed in the first quarter of next year by a full personal care collection encompassing an aftershave balm, a body wash, a deodorant spray and an antiperspirant deodorant stick.

Jeter said he had “total control” in the products’ development, from the logo and packaging down to the name and selection od the fragrance.

“Smell is probably one of the first things you remember about a person,” he told WWD in an exclusive interview at Avon headquarters here. “I can tell you what a person smells like even if I can’t exactly remember someone’s name or personality.”

Though terms of the fragrance contract, which was signed on Friday, were not disclosed, Avon said the deal is a multiyear partnership.

The contract is bound to further boost Jeter’s profile and endorsements, which already earn him an estimated $6 million a year and include Nike, Gatorade and Ford. As a Yankee, he has a 10-year contract worth $189 million.

But most important to Jeter is his fragrance’s name and the power of the scent itself.

“You have to have drive and determination when you’re trying to accomplish any goal. If you’re driven, you can do anything you want to,” said Jeter, who’s won four World Series championships as a Yankee. And after 11 years of playing for owner George Steinbrenner’s clean-cut Yankees, creating a new fragrance seemed right up Jeter’s alley.

“We have strict rules for the Yankees. We have to be clean-cut,” said Jeter, who looked just as sharp and polished off the field as he does on, wearing a loose-fitting suit jacket with matching trousers while sporting his new scent. “There’s no facial hair below the lip, and your hair has to be a certain length.”

The seven-time All-Star isn’t too concerned about his fellow team members giving him a hard time about the fragrance, though.

“Since it smells good, I think they’d be more inclined to ask me for some,” joked Jeter, who added that he consulted both his mother and his sister about the scent, to get a woman’s opinion.

Jeter’s history with Avon traces all the way back to his childhood days growing up in Michigan.

“Growing up, you’d have the Avon lady who went knocking door-to-door. It’s a little bit different now with the Internet, but I remember that my mom used to buy their products,” recalled Jeter.

When asked if his fragrance could possibly win over his Red Sox Nation rivals, Jeter joked he’d have to work on getting Avon’s northeastern “Red Sox representatives” on his side.

For a superstar athlete, the modest Jeter certainly hasn’t let it go to his head. And as for his status as one of New York’s most eligible bachelors, the Yankee downplays his celebrity, responding, “Maybe when I was younger, but I’m getting older now.

“I’ve grown up in New York and been here since the age of 20, so you sort of adjust to it. But I never look at myself like that. I enjoy it. It’s flattering,” said Jeter, 32.

Jeter, who resides in Tampa, Fla., during the off-season, claims to be a “homebody” now and a huge movie buff. “I can’t cook, so I go out to eat a lot, and my favorite movie of all time is ‘Friday,'” the 1995 comedy starring Ice Cube and Chris Tucker.

Jeter jokingly said one of his favorite fragrances is Davidoff’s Cool Water because “Snoop Dogg sang about it in a rap song.” Yet that song’s lyrics could describe Jeter’s always polished image: “I got the Johnson baby powder and Cool Water cologne/Now I’m fresh, dressed, like a million bucks.”

Set to launch in November, Driven was created by Drom Fragrances International and is a fresh fougère, blended from top notes of grapefruit, oakmoss and spice; middle notes of rhubarb, iced lavender, cardamom and American spearmint, and bottom notes of bamboo, pacific driftwood, wengue wood and snow musk.

Packaged in a sleek blue bottle with a silver cap, Driven will be the first in a series of men’s grooming products. As the company’s 10th fragrance in the men’s portfolio, Driven will be sold by Avon’s 500,000 sales representatives in the United States, Puerto Rico and Canada, as well as through the company’s Web site.

“This is all new to me,” Jeter said. “It’s hard when you’re sitting there just smelling all these different things, wondering how it’s going to come out. I smelled so many different things that in between I had to smell coffee beans, because I was losing sight of what was what.”

But while few athletes of Jeter’s caliber have fragrance deals, Avon was determined to sign Jeter to a deal. The company was particularly attracted to Jeter’s work with the Turn 2 Foundation — an organization the Yankees shortstop founded 10 years ago, aimed at motivating healthy lifestyles for young people. The Avon Foundation plans to collaborate with Turn 2 in various initiatives.

“It wasn’t just about going after a spokesperson, but a truly collaborative partner who would be engaged with us not only on product development, but also in our core values,” said Claudia Poccia, president of Avon U.S. Beauty and global president of Mark, who added that Jeter’s appeal transcends baseball.

“He’s known not just for his prowess in his chosen field, but also for the kind of character he brings to it,” said Liz Smith, executive vice president and president of Avon North America. “I’m a mother of sons, and I recognize the importance of having an inspirational role model for them. And Derek really embodies that. He is one of those rare individuals who have become identified for his abilities and his values.”

While the baseball star joked that what really attracted him to Avon was the company’s 500,000 female reps, Poccia said, “He’s truly a partner and has a point of view about men’s grooming. He selected everything from the silhouette of the bottle to the color of the glass, the name and the scent itself. He wanted it to be a rush of adrenaline when you first spray it,” said Poccia.

Added Smith: “The men’s business is booming and is ripe with opportunity. Like everyone else in America, we were impressed by his passion and success as a sports hero. But we were equally inspired by his dedication to give back to the community. It was really those philanthropic values — very similar to what we do and created with the Avon Foundation — that led to this partnership.”

The fragrance is aimed at men 18 and older. These are prestige and mass fragrance users who are inspired by male role models.

“It’s about living a life without limits. About being passionate and committed, and having the courage to go after your dreams and the focus to achieve them,” said Poccia.

Driven will be supported by an extensive advertising campaign, with a budget estimated at about $3 million that will include print, online and outdoor advertising, as well as sampling. The fragrance’s print advertising campaign will break in five to seven November women’s and men’s national magazines, including People. This will include a mix of scent strips and single-page ads. Also in November, outdoor advertising will appear in New York on a Times Square billboard as well as on taxi toppers and phone kiosks.

Avon will aim for more than 26 million scented impressions. More than 2.7 million samples will be distributed to consumers.

“It’s a clear departure for us, and it’s the first time we are aggressively advertising and putting together a true 360-degree approach to bring this to market,” said Poccia.