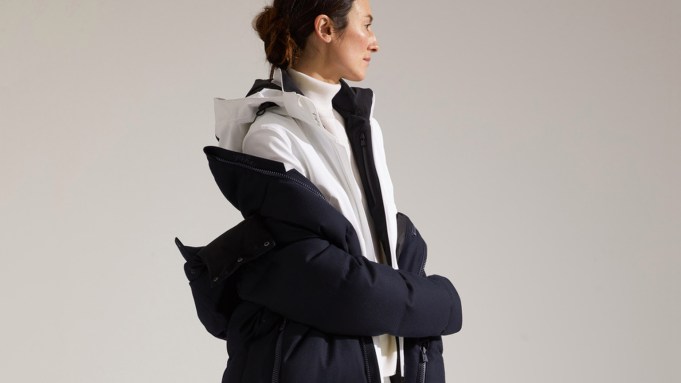 Aztech Mountain, the luxury performance ski and outerwear label based in Aspen and New York, is launching women’s for fall 2019.

Anthony Heifara Rutgers and partner David Roth founded Aztech Mountain in 2013 with premium men’s technical gear crafted from luxury materials and positioned to compete with brands like Moncler, Patagonia and Canada Goose. Since then, Bode Miller, the six-time Olympic skier, took an equity stake in the company in 2016 and became chief innovation officer. In October, Ron Frasch, the former president and chief merchant of Saks Fifth Avenue, who is now an operating partner in the private equity firm Castanea Partners, joined as the brand’s first board member.

Rutgers and Roth are both serious skiers — they have a home in Aspen, where Rutgers grew up — with some fashion experience. He spent 12 years at Marc Jacobs in various positions ranging from assistant to merchandising to IT; Roth previously worked in finance and forensic accounting, and his family has a history in luxury eyewear. They had the idea to get into technical ski and outerwear around 2007, when Rutgers was still at Marc Jacobs, and Prada Linea Rossa, of which he was a fan, changed course. “It was a product that I wore on the mountain in Aspen and then I would wear it to the office and it was seamless,” he said. “When they decided to change their distribution strategy was when stores like Barneys, Harrods, Lane Crawford were in our offices at Marc saying, ‘We need outerwear.’ That’s really what happened. The idea, from a product standpoint, was something extremely sophisticated but very technical.”

Their first product, the Nuke Suit, a jacket made from Schoeller C-Change waterproof wool and down, is still their best-selling product. It’s the style that piqued Miller’s interest during a photo shoot in Chile, after which he had his agents at CAA track down Rutgers and Roth to set up a meeting. “The guy from CAA was like, ‘Bode absolutely loves your products but he has no idea who the hell you guys are. Who are you?’” said Rutgers. “That’s how Bode came on board.”

Aztech Mountain’s men’s product has since diversified to include ski pants, shirts, flannels, sweaters, and a summer collection. It’s in 81 points of sale globally, including Mr Porter, Harrods and Barneys New York, as well as Aztech Mountain’s own e-commerce site.

The women’s collection has been in development for two years. Initially, Rutgers and Roth thought they would have to design something completely different from their men’s line to suit women. “We were thinking different fabrics, different color palettes, different, different, different,” said Rutgers. “We sampled it and we showed a few of our key retailers and everybody unanimously was like, ‘No, I want the same product for women that you do for men, just cut in the women’s version.’”

In addition to the women’s Nuke Suit, styles include the Elk Mountain Puffer, an exaggerated A-line parka made in Loro Piana wool, completely waterproof with 800 grams of down. There’s a body-conscious on-mountain, waterproof jacket that’s filled with thin down, that rather than being injected and blown into the jacket to puff, it’s treated and done in sheets that create a slim silhouette but provides maximum temperature. Lifestyle-wise, there’s a reversible bomber. There are also Teflon-treated waterproof knits, ski pants and flannels. Colors include navy and black with contrast fluoro details, as well as sky blue, white and yellow. Prices range from $295 for brushed flannels up to $1,650 for the Nuke Suit.

“She’s extremely sporty, she’s extremely chic,” said Rutgers of the brand’s female customer. “Like the man, she’s living in New York, she’s living in L.A., San Francisco, has a house in Aspen or is traveling globally and is certainly very demanding and discerning from a product standpoint.” While logo mania is still very much going on in the upper echelons of luxury fashion, Rutgers noted that the Aztech Mountain customer is not into it. “He does not want logos right now. That’s been something that we’ve been able to really fulfill,” he said, “We think that’s certainly the case for women’s as well.” Instead of slapping a logo on everything, they focused on creating recognizable visual details, such as arranging the zippers in a triangle pattern and putting a graphic racing stripe down the back of jackets. Some linings feature photographic prints of pro skiers, such as Kiki Cutter.

The products are also designed with thoughtful, clever details, such as flannels with magnets at the collar so you can snap them high around your neck and pockets lined in micro fleece. “One of the biggest things I’ve found being a young brand, competing against Moncler and all these monolithic companies, is detail,” said Rutgers. “Nobody in their right mind would use that nice of a fabric on the inside of a pocket, but for us it’s trying to create these emotional connections with the customer, so they’re like, ‘OK, I get it, this feels like a hug.’”