“Every time he went to a fashion auction, he used to say he was going to the physiotherapist,” said Carla Sozzani, Alaïa’s close friend and cofounder of the Association Azzedine Alaïa, speaking at an event at the maison’s headquarters in Paris on Thursday.

“We would say to him, ‘But you already went yesterday,’” she continued. “And then he’d come back laden with huge plastic parcels that he would hide under his desk. Just last month, we discovered some of those parcels: They contained rare Vionnet and Balenciaga pieces.”

The extent of Alaïa’s personal couture collection was discovered following the designer’s passing in November 2017, and was somewhat overwhelming.

More than 10,000 garments, ranging from vintage Vionnet, Charles James, Schiaparelli, Jean Patou and around 200 Balenciaga items, to more contemporary pieces like Martin Margiela and Comme des Garçons, lie in the fashion house’s archives in the Marais, left without any directions from the collector himself.

“I knew Alaïa was collecting, as I often saw him in the auction rooms and he always snagged the best pieces,” Olivier Saillard, fashion historian and director of the Association, told the audience. “It’s only after his death that we realized the scale of his collection: It was as if an ant had dug a huge underground gallery that it had progressively filled with the biggest private fashion collection in the world.”

Daunted by the mass of clothing she was faced with, Sozzani called Jessica Glasscock, research associate at the Met’s Costume Institute, to the rescue.

“It was very packed and kind of like a labyrinth,” said the researcher of the designer’s personal archive. “I was expecting for it to be less organized and tidy, but in fact there is a real logic to it. You could tell that Alaïa cared very deeply about how everything was put together.” 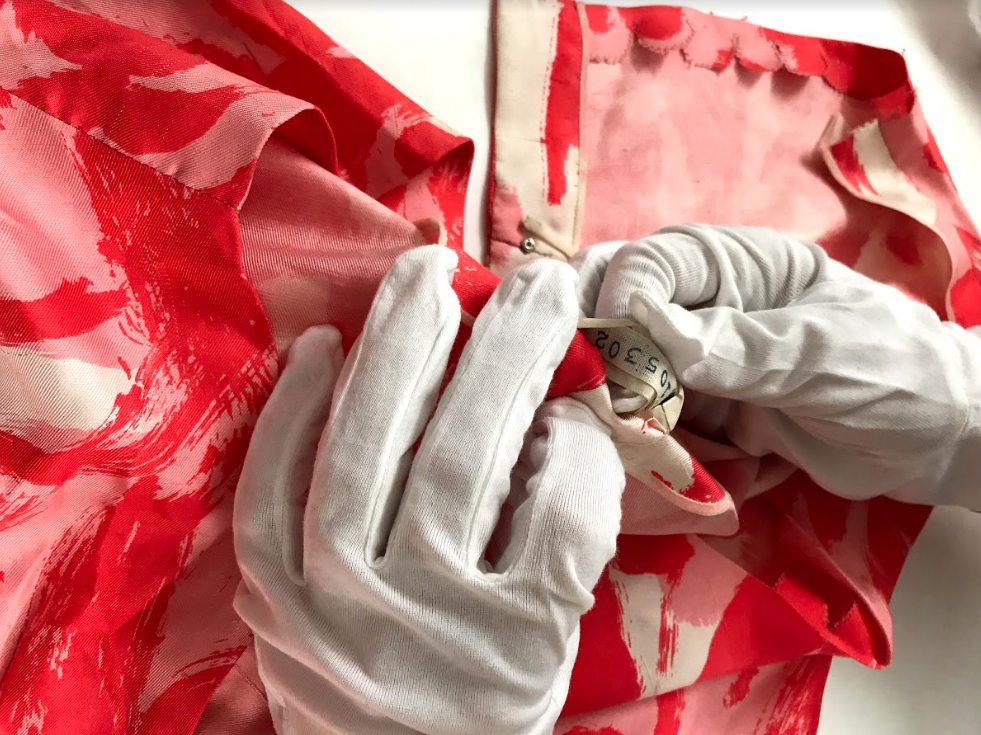 A student from the “Archiving Fashion” summer course working on her assigned Balenciaga piece from the Alaïa archive.  Marco Pecorari

Glasscock didn’t tackle the monumental archives alone. She reached out to Marco Pecorari, director of the Fashion Studies MA at The New School Parsons Paris, in order to figure out a way to raise awareness about this historical couture collection and use it as a way to introduce students to the intricate practice of archiving fashion.

From July 1 to 18, four Parsons students were allowed to step into to the Azzedine Alaïa archives as part of the first edition of Parsons Paris’ “Archiving Fashion” summer course. Each student was given a garment from the designer’s private collection and, using the Met’s cataloguing guidelines as well as more theoretical research developed within Parsons’ Fashion Studies program, was tasked with coming up with ways to record the garment’s existence.

“What’s interesting for the students is that it is the collection of a specific person,” said Glasscock. “Student work dives into that in a way that museum work doesn’t necessarily. There is a story and narrative, a memory that is embedded in the collection. In addition to the usual cataloguing standards — dating, measuring, description, condition assessment — there are more romantic narratives that they can bring.”

Unveiled at the Azzedine Alaïa headquarters on Thursday in the form of videos detailing their process — the garments themselves stayed safely away from broad daylight — the work of the students focused on four pieces from Cristobal Balenciaga’s final collection before he closed his fashion house in 1968, an event that actually kick-started Alaïa’s collecting spree.

“When Balenciaga closed in 1968, the house’s director of haute couture called Alaïa to suggest he come over to collect some of the leftover fabrics and dresses, saying that if he needed to he could cut some of them up,” explained Saillard.

“When the designer saw the dresses, he immediately knew he couldn’t possibly touch any of them. He said that was the moment his sense of responsibility in regard to fashion heritage was born, and he took the whole lot home.”

However, that didn’t stop Alaïa from being a bit curious.

Sharon Brand, a student at Parsons New York, was entrusted with a printed silk day dress from the 1968 couture collection, the left shoulder of which had been entirely unstitched by the designer, revealing its inner workings.

“When I first got the dress, I was shocked,” said the student, speaking at Parsons a couple of days prior to the unveiling of the Alaïa project. “I didn’t know haute couture garments could be deconstructed, pulled apart and opened in such a way. My first question was: Why did he do that? Why was he so interested in the skeleton of the dress?”

During the three-week course, Brand studied Jacques Derrida’s philosophy of deconstruction as well as articles written by fashion academic Alison Gill focusing on deconstructing garments and “looking at X-rays of it,” which she applied to the Balenciaga dress.

“The traces of deconstruction evidence the technical complexity of the Spanish couturier’s work, but also Alaïa’s hands, his sartorial operations, his obsessions with the construction of garments and their functioning,” said the student. 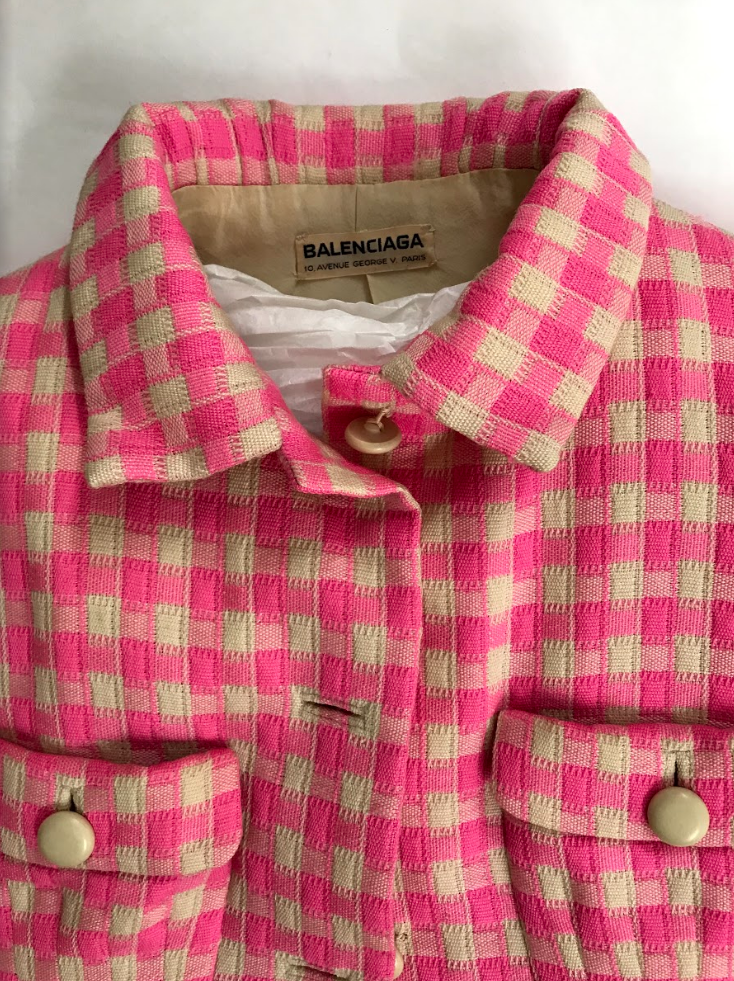 There were other mysteries within the four Balenciaga pieces, such as a checked wool skirt suit — a prototype — on the back of which a square piece of fabric was missing, presumably cut out by Alaïa himself.

“What could trigger someone to do this sort of thing,” mused Or Rosenblum, the student to which the suit was assigned.

“Trying to understand this sort of thing forces you to rethink the process of building a collection. Each of these garments brings different layers not only of the collection, but also of the characters of the people themselves — the designer, the collector. A personal archive is like a ‘Kunstkammer’: a room filled with wonder.”

Upon completion of the course, in addition to credits acquired for their second M.A. year, the students will have benefitted from unique immersive training, complete with knowledge of the Met cataloguing software — the TMS database — visits to the Balenciaga and Palais Galliera archives, as well as more practical knowledge.

“We had to have clean fingernails at all times, no jewelry, hair tied back and always wear gloves,” said Brand. “Also, we could only use pencils — pens were forbidden in the proximity of the garments.”

For Pecorari, the summer course was also a way to prepare Parsons students to an emerging job sector, linked to the growing interest fashion houses have for the preservation of their own archives.

“I wanted to find new ways to implement and materialize the academic discussion on fashion,” said the program director, who started the Fashion Studies M.A. at Parsons Paris in 2016.

While Saint Laurent, with the help of Pierre Bergé, was the first designer to officially constitute his own archive in the Sixties — a clever move that led him to become the first living fashion designer to get a dedicated exhibition at the Met — it wasn’t until the Nineties that fashion houses started to officially exploit their own archives.

“Strangely, that’s also the moment we saw an increasingly rapid turnover rate of top design positions and the re-launch of so many old fashion houses,” said Saillard. “To give them a bit of soul, you necessarily need to look towards the brand’s heritage.”

This led to most fashion houses inaugurating their own archive section — Dior created its Heritage department in 1987, Chanel its fashion conservatory in 1996 — and increasingly turning towards the past to nourish their creative process.

One of these was Balenciaga, while under the creative leadership of Nicolas Ghesquière from 1997 to 2012. The designer inaugurated the Balenciaga Editions collection in 2003, tapping into Cristobal Balenciaga’s previous designs to re-edit some of his signature pieces.

“The 1968 wool coat I was assigned for the project was one of the pieces that were re-edited by Ghesquière,” said Parsons student Aya Elsa Yassine. “It was great to be able to see the 2009 version and compare. There is a big value in archives for fashion houses in terms of the continuity of creative directors, helping them stick with the core brand identity.”

All parties involved in the project stressed their will to pursue the academic exploration of the Alaïa archive.

“Archives have become such an important part of fashion that we were proud that this project was created in partnership with young people,” said Saillard. “The mission of the future Azzedine Alaïa foundation will be to organize exhibitions to show its resources, but also to invent in collaboration with younger generations. Giving a class on archiving is also a way to teach them the importance of memory.”

Such a project would be aligned with Alaïa’s character, agreed Sozzani.

“He was an incredibly generous person,” she said. “He wanted to turn his archive into a museum and invite young people to discover his work, but not just his own – also the creations by the great masters of fashion. For him, physically owning these couture pieces was a way to protect them and keep them for posterity. He wanted everyone to be able to see, participate and learn about fashion.”