B-T-S: Back to the Seventies 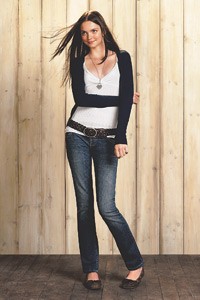 NEW YORK — For back-to-school 2006, it’s time to give ripped jeans a rest and go skinny instead.

Looks will be less flashy, with more tailored, tighter silhouettes, analysts said. Colors will be darker for tops and bottoms, with tops seeing longer lengths. The inspiration: Seventies with a dash of fashion sophistication.

Although denim will continue to be a major focus for fall, styles will be cleaner, darker and skinnier. Graphic Ts will be an important item, but instead of youthful, bright colors, they will come in shades of dark brown, with silver, gray and gold accents.

Overall, consumers will see more neutral colors, grays and an emergence of shades of purple, analysts predicted. One of the most influential trends will be the rocker style.

Here, bands such as the Yeah Yeah Yeahs and the Scissor Sisters, as well as their fans, are embracing this look. And for the 2006 b-t-s season, it’s a look retailers are betting on to drive sales. Stores are also rolling out b-t-s merchandise earlier to gauge reaction to their offerings so they can tweak the mix before the season peaks. Back-to-school is becoming a strategically vital season to retailers, who see it not only as a critical transition into the fall season, but as a way to grab interest for the all-important holiday shopping season.

Analysts anticipate a solid b-t-s season, with sales rising 3 to 4 percent. The fashion crowd faces the perennial challenge of merchandising to the eternally fickle teen.

“We remain comfortable that by the start of the fall season demand for these new trends will be much stronger then it was when these trends were launched this past spring,” Elizabeth Pierce, senior vice president at Sanders Morris Harris Group, wrote in a research note.

Pierce said the stronger demand is likely to be the result of improved awareness of these trends among consumers. She expects retailers will be doing a better job of explaining b-t-s and fall fashions through more understandable visual presentations and displays, which also will help promote a higher level of comfort in exploring these items.

As for the impact of higher gas prices on consumer spending, the analysts predicted that parents will dole out the money to dress their kids in the latest fashions anyway.

Michael Niemira, vice president, chief economist and director of research at the International Council of Shopping Centers, estimated total b-t-s sales will rise 3 to 4 percent this year from the $24 billion in sales reported in 2005. He expects apparel and shoes to be softer than last year, with more consumers spending money for books and computers.

“The consumer has lived with high gas prices and rising interest rates, and sales have remained relatively good,” Niemira said. “The problem is that the performance might be somewhat uneven depending on those factors more than anything else. [However] I am surprised at how the industry sales continue to [be] on the stronger side, and do not want to underestimate the potential as the b-t-s season gets going.”

Coleman Research Group’s Hali is more bullish on b-t-s consumer spending. “We’ve been expecting to have a downturn for a while, but it’s not happening,” Hali said. “Customers are cutting back in other products. Looking good and being on trend is still paramount.”

Eric Beder, senior vice president at Brean Murray, Carret & Co., said: “Teens don’t care about gas prices or interest rates, and parents want their kids to look good when they go to school. In my opinion, the holiday shopping season is more economics-driven than b-t-s.”

Last year, specialty retailers launched products for the b-t-s season about two weeks ahead of schedule. There were a few glitches, such as positioning sweaters in markets that were still too warm for shoppers to think about fall apparel, but overall, the gamble paid off, as retailers were able to test fashions early and make appropriate adjustments as the season peaked. Both retailers and analysts concluded that the 2005 b-t-s season was a success.

Because of the desire to get the b-t-s fashions right, some retailers are already beginning to roll out merchandise for the season, even though summer vacation recently started for most students. And at some stores, back-to-school items crept up after the July Fourth weekend. Abercrombie & Fitch introduced new hoodies and sweaters in June, positioning the looks along with “wear-now” items.

“There is definitely an advantage to releasing earlier and being first,” Beder said. “You can sell early if you have the right fashion product.”

The retailer’s three floor sets will be spread out geographically according to the weather and the peak of the b-t-s season, with the South receiving the first deliveries of merchandise.

“We are staggering promotions,” Ohashi said. “Each region will have different promotions to maximize traffic when the parent or kid is shopping for b-t-s.”

American Eagle Outfitters released its full b-t-s merchandise on Tuesday, although consumers had the opportunity to purchase new fall jean styles in mid-June. “We have been extremely encouraged by our early selling read on [American Eagle’s] new jean styles, including the Artist and Boyfriend jeans for girls … as well as two boot-cut styles for boys,” Tom Filandro, senior analyst at Susquehanna Financial Group, wrote in a June 30 research note.

In addition to new merchandise, retailers will also need innovative ways to draw customers into the stores and regain intimate access, especially with the ease and availability of shopping on the Internet, Hali said.

Hollister and Abercrombie create an exciting environment with vibrant window displays, loud music and promotions, Hali said. J.C. Penney’s Jam Concert in June also boosted the department store’s status with teens, who as a group are generally described as being more “socially conscious.”

The concert, which featured music and pop icons such as 3 Doors Down, John Legend and Martina McBride, was intended to increase awareness of the need for access to quality after-school programs while raising money so more working families have access to these programs.

“Teens don’t have loyalty to retailers,” Hali said. “They may go into their favorite stores they always shop at, but if they don’t have the product they want, they will find it elsewhere.”

Increasingly, the “elsewhere” has been at Penney’s, as well as moderate department store competitor Kohl’s. In recent months, the two retailers have been hitting the target in junior and children’s apparel, analysts said. Kohl’s exclusive contract with the popular Candie’s Brand and Penney’s collaboration with Sephora has placed moderate department stores in tight competition with specialty retailers for b-t-s.

To attract customers, specialty retailers will need to keep incorporating higher fashion into their assortment, which is aside from key items such as T-shirts and jeans, said Beder of Brean Murray. “Retailers are realizing that even the basic kid wants trend-right fashion and wants to look good,” he said.

Abercrombie & Fitch and American Eagle Outfitters have already set themselves apart from the competition by providing unique, trend-right items at higher price points. Other teen specialty retailers, such as Aéropostale, are following by incorporating higher-fashion items into their b-t-s mix. These retailers take traditional items such as denim and Ts and add a modern flair. This fall, American Eagle will be updating men’s items such as hoodies by adding chunky cuffs and new necklines that make the merchandise different from items in customer’s closets.