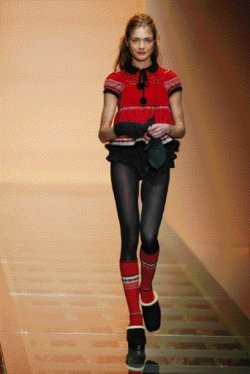 Jean Paul Gaultier: On their peachy plastic heads, scores of doll babies held up Jean Paul Gaultier’s runway on Saturday like an army of miniature pot-bellied caryatids. But Gaultier’s kiddie fixation didn’t end there. The runway has always been the designer’s metaphorical playground, but this time it was literally so — and he played like it was recess. He paired an adorable red babydoll sweater with ruffled bloomers and took it running, skipping and jumping from there, showing rompers in taffeta, cherry red velvet and even sleek brown fur, and getting cute with Peter Pan collars, pretty puffed sleeves and rickrack trimming along the way.

Of course, Gaultier showed plenty of babydoll dresses — like, duh — including some that gave way to a Gothic moment or two, as most teens do. But even his handsomely tailored suits, most layered over hoodies or under huge anoraks, joined the youth movement.

Still, it wasn’t all kid’s stuff. The collection was rich in ideas and just plain rich, full of delicately done clothes that looked luxe from a mile off. And it was a real romp, that’s for sure. While the logic of the show itself — which opened with Natalia as a fresh-faced cutie and closed with Natalia as the wizened vamp — puzzled some, there was plenty there to love, both babyish and all grown up.

Celine: You’ve got to love a snow bunny, especially if under her fur bonnet tied up with pompoms, she’s utterly chic. And that’s just how she looked in the Celine collection that Michael Kors showed on Saturday, which was one of his best. Kors delivered a deft web of references, performing a gentle decade hop while commuting between the urban hub and snow resort of his imagination — each idealized into a pristine fashion backdrop.

“There’s nasty, and there’s sweet,” Michael Kors said before his show. “It’s a hodgepodge of the things I love.” But all delivered with a singular goal: “Everything is meant to put a smile on your face. What other reason is there to buy anything now?”

The snow queen will love Kors’ playful furs — the hooded white mink, the delightful pink powder-puff chubby. But when she gives in to her alter-ego pseudo-bad girl, she can go for the audacity of giraffe and zebra patterns, all aglow with sequins, and racy leathers. And when a girl can’t decide, it’s so helpful that some looks go both ways: a beaded pink, fur-collared cardigan over racy Rizzo pants in black stretch satin.

For more discreet moments, there were clean-cut Sixties lady coats, and an almost-practical mackintosh-and-mink coat. And when discretion just won’t do: a shining silver croc jacket. Kors plays to a woman who believes that coordination is the better part of fashion, a woman proud to match her bag to her shoe. For fall, she can do that and go one better, with bag-and-coat combos in, for example, checkerboard Saga mink.

Evening was short and sweet, in little icicle-beaded shimmy numbers and a cashmere dress embroidered in wispy feathers and sequined flowers — perfect for when the bunny comes in from the snow.

Emanuel Ungaro: Three fallen disco balls twinkled center-stage at Gianbaptista Valli’s Emanuel Ungaro show, but gravity didn’t get the best of his airy look. A woven fur jacket and a feather-weight anorak did their part to keep the mood light as helium, but chiffon — lots and lots of chiffon — gave the collection its lift. Of course, that gossamer fabric is to Ungaro what chocolate is to Hersheys, but, this time around, Valli didn’t indulge in any overwrought ruffle work. He did well by the house with wispy chiffon minidresses in watery prints that pulled across the hips with smocking, and delicate blouses that slipped just so to reveal a filmy tank beneath.

But if Valli worked the chiffon thing until he could simply work it no more, then he absolutely binged on leggings, showing them paired with all of the above, whether rippling and ruched, glittering with butterflies or in a haute hobo version, mended with shimmering squares of silver.

What he didn’t show was much of anything else. There were chiffon gowns in faint florals and pulled high to show off — you guessed it — more leggings. But this season the flashy Eighties look is getting less and less play. Valli’s challenge in the months ahead will be to come up with a fresh angle that delivers not only pretty clothes, but options.