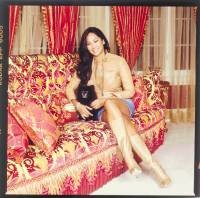 NEW YORK — Kimora Lee Simmons is not one to shy away from attention.

With plans in place to launch a Baby Phat co-branded mobile phone, an upcoming appearance as a judge on a reality TV show and a new ad campaign in the works, she’s looking to boost her three-year-old brand’s profile.

Her goal is to make Baby Phat a lifestyle brand, and given that cellular phones are treated as fashion accessories by many in the hip-hop community, it seemed a logical brand extension to Simmons. The phones, produced by Motorola, are to be launched on Feb. 14. Only 500 of the limited-edition phones are to be produced and they will be sold exclusively in the Phat Farm boutique in SoHo as well as on babyphat.com.

This move follows on the heels of a similar deal reached last year by Phat Farm, the men’s brand of Phat Fashions, which is owned and run by Kimora’s husband, Russell Simmons. The Phat Fashions empire also includes Rush Communications.

The phone, which Kimora Lee Simmons said is targeted at women, is light pink, which happens to be the designer’s favorite color and, she noted, is an appropriate choice for a Valentine’s Day launch.

“This is the first time that a cell phone has been made to specifically target women,” said Simmons, who serves as chief executive officer and creative director of Baby Phat. “Unless you are a guy who likes pink, then he can have it, too. But really, it’s for my girls.”

Simmons said she is confident that she knows what her customers want, and while clothes are the primary focus of the $70 million brand, she hopes the phone can lead to the launches of other nonfashion products. They just have to fit into the customers’ lifestyle — one that Simmons calls a “hip-hop girl.”

Simmons plans to launch the phone at Baby Phat’s Feb. 13 runway show in Bryant Park. Besides carrying the unique color and Simmons’ signature, this Motorola i95cl combines a digital mobile phone with a color screen, two-way pager, Internet access and a long-range walkie-talkie function to give users instant communication with one or up to 100 people at the same time. It also includes customized musical ring tones and preinstalled applications, including a slide show featuring a sampling of Baby Phat’s spring 2003 fashion line, a calculator and games. The phone, which uses Java technology, allows users to download additional ring tones and games. It also features voice-activated dialing, a speakerphone, a 250-entry phone book, VibraCall alert and Turbo Dial one-touch dialing. The phones will retail for $500.

“This is a wonderfully designed phone and it’s very fashionable,” she said. “It comes with a pink pouch and has features that you can’t get on another phone. Also, since it’s a limited edition, there is appeal. Girls that are into fashion will do anything for fashion, so the way I see it, it’s a small price to pay to make the statement.”

Peter Aloumanis, vice president and general manager of the U.S. markets division for Motorola’s iDEN subscriber group, called Simmons “one of the most influential personalities in the entertainment and fashion worlds.”

He added that Motorola would consider licensing deals with other fashion brands as well.

“We are always looking for opportunities to work with leading-edge designers as the Motorola cell phone fast becomes a must-have accessory,” he said. “The Phat Farm designer cell phone has been tremendously successful and we see great opportunity in working with designers to create exclusive cell phones that are in line with their fashion vision.”

But putting her name onto consumers’ cell phones isn’t the end of Simmons’ plans to raise her profile. She also will serve as a judge on the upcoming UPN reality series, “America’s Next Top Model,” where she will be part of a panel of judges seeking a new supermodel. The series was created by executive producers Ken Mok (who also worked on the reality series, “Making the Band”) and Tyra Banks. Simmons, a former model, will join supermodels Banks and Janice Dickenson, Marie Claire editor Beau Quillian and a different guest judge each week on the show, scheduled to air in the spring.

Judges will screen participants, in search of one with the look, skills and attitude to become a top model. The judging panel will conduct regular evaluations to narrow the field from week to week as they take participants into a high-pressure series of competitions that will determine the series-end winner.

The brand is also making the final plans for its spring 2003 ad campaign, which is being put together by marketing director Michelle Perez. The ads will run in magazines such as Honey and V, but will also appear on the top of 50 New York City taxis beginning during next month’s fashion week. The campaign was styled by Patti Wilson and photographed by Terry Richardson with art direction by Raul Martinez at A/R Media. The model was Meghana, who replaced fall model Devon Aoki.

“The new campaign was all about showing a fresh face,” Perez said of Meghana. “She’s exotic-looking and really works as the face of Baby Phat for the spring.”

The company also is planning to sponsor a tour with Motorola for a popular singer. Russell Simmons also said a couple of major cable networks are bidding to air a live Baby Phat lingerie show.

But for the moment, Kimora Lee Simmons is finishing up the taping for the UPN series and preparing to return to New York to put the finishing touches on her fall 2003 line.

“It’s a sexy Seventies, Diana Ross-inspired line, highlighted by a rich color palette,” she explained, mentioning that even in the fall when the weather is colder, a woman can still dress as sexy as ever. “There’s overcoats and peek-a-boo skirts with high slits. Every detail is sexy.”