The brand's founder talks about the link with the fast-fashion retailer for its relaunch back into the marketplace.

It’s a drawn-out sentence that seems to run the length of the ramp Kimora Lee Simmons Leissner rolled down as she emerged from the makeshift hair-and-makeup room to head down to the skate rink at World On Wheels in Los Angeles. Her daughters, Ming Lee and Aoki Lee, are already there, the three ready for a Baby Phat photo shoot as the brand readies for a major reboot, beginning with Thursday’s launch of a Forever 21 summer capsule.

“World On Wheels has an old school, nostalgic feeling. It’s current and fun and trendy and that’s what this is: Baby Phat 2.0, Baby Phat reloaded,” Simmons Leissner said. “It’s myself and Ming [Lee Simmons] and Aoki [Lee Simmons]. They’re not babies anymore or behind the scenes. They’re front-and-center and they’re helping with designs as well as the business.”

Simmons Leissner — designer, model and entrepreneur — bought back the Baby Phat by Kimora Lee Simmons brand, recognizable for its cat silhouette logo, in March for an undisclosed sum. The move represented a return to the label she started in 1999 under then-husband Russell Simmons’ Phat Fashions, helping carve and solidify a powerful point of view and space for women within the male-dominated urban streetwear market. 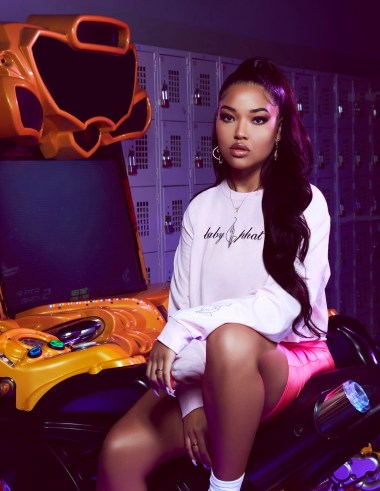 She re-inserts herself back at the helm of a business as much of streetwear continues to reflect and think about female representation in the space — what strides have been made and what more there is to do.

“I’m a woman in fashion and I have been 25, 30 years,” Simmons Leissner said. “I have two girls and two boys as well. I think a lot of the strides that have been made in the past 30 years have been our strides. I’m very much entrenched in that movement. I’m always fighting for multiethnic brands, businesses and brands run by women in everything that I do. That’s very important and it’s never enough. We’ve been kicking the doors for well over 20 years and people have been doing that before me and will continue to do that…I have little girls that are named Kimora, so it’s important to me if someone asks ‘Where did you get that name?’ that they not just say “you,” but what does that stand for? So it’s, yes, that we can be fearless and loud and kick the doors open and still be gracious and sexy and kind, nice people. That’s what I want to represent.”

From a product standpoint, this Baby Phat reboot through Forever 21 represents what much of the market remembers of the brand. It will have all of the baby Ts, tank tops, body suits, velour, short shorts and half tops set against more modern, neutral colorways. Distribution will be through Forever 21’s online shop and its 236 stores domestically with all stock-keeping units priced under $25. 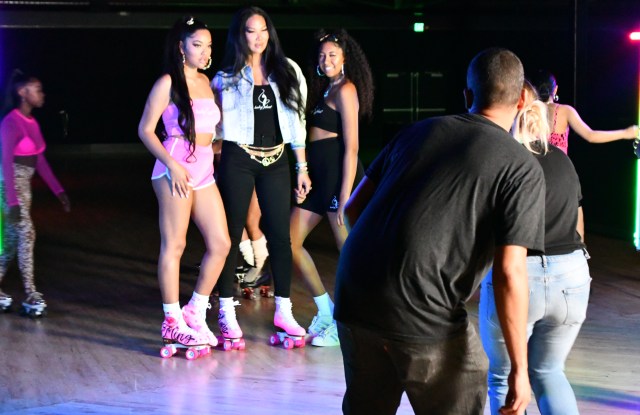 Behind the scenes of the Baby Phat shoot for its Forever 21 summer capsule.  Kari Hamanaka

The idea is the brand will be nostalgic appeal for the Gen X customer who was there when Baby Phat first launched, or for the young girl who recognizes the brand through her mother.

“Fashion repeats itself. It regenerates,” Simmons Leissner said. “Whatever is old is new. Whatever’s been done is being done in a new, fresh way and so I felt like Baby Phat fills a void for so many. It’s not super expensive. It’s affordable. I feel like a lot of what’s being done now is something we’ve been there, done that.”

Baby Phat for Forever 21 is yet another notch in the retailer’s belt of collaborations. Forever 21 has been on a tear more recently, inking deals for collections with Cheetos, Speedo, Pepsi and a capsule paying homage to singer Selena Quintanilla–Pérez, even as more recent reports peg the company to talks about a possible restructuring amid its withdrawal from the Chinese market.

For Baby Phat, the Forever 21 collaboration sits in juxtaposition to much of the streetwear that’s become more mainstream or aspirational today with high price points and limited quantities. That’s not what Simmons Leissner wants for Baby Phat 2.0.

“I think it’s important to have a little bit of something for everyone so that’s why it was fun to do the collaboration with Forever 21,” she said. “We also have our Baby Phat by Kimora Lee Simmons [label] and we have a little bit more high-end pieces. I wouldn’t call it luxury like some people have really high price, luxury streetwear. Ours is right at the middle or very affordable.”

The business will continue to gain steam with the Baby Phat online shop into the summer as more collaborations roll out, she said. Simmons Leissner also hinted at an international launch and said companies have already begun reaching out on the beauty and fragrance side — categories the brand had seen success in previously, with some seven fragrances at one point. 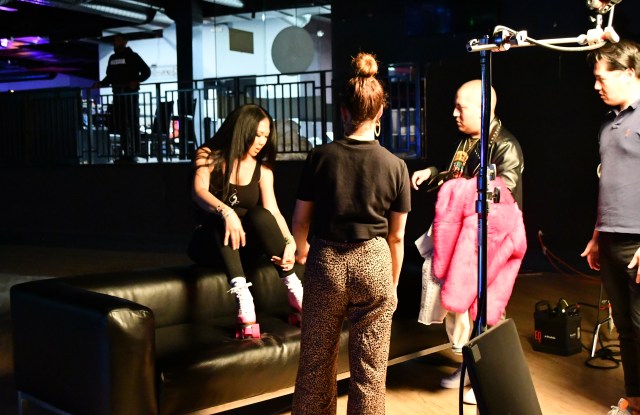 It also continues to be a family affair with Ming Lee, 19 and studying at New York University, and Aoki Lee, age 16 and recently admitted to Harvard University, working on the business.

With Ming Lee in New York, she’s in the Baby Phat office several times weekly. Aoki Lee works on designs and also has taken an interest more on the business side, almost from the perspective of a consultant, Simmons Leissner said.

“From numbers and finance, to running the business and all the fashion and creativity, we do every single thing together,” Simmons Leissner said. “It’s always been that way. The girls have been with me and the world knows that. They’ve seen them grow up since they were born.” 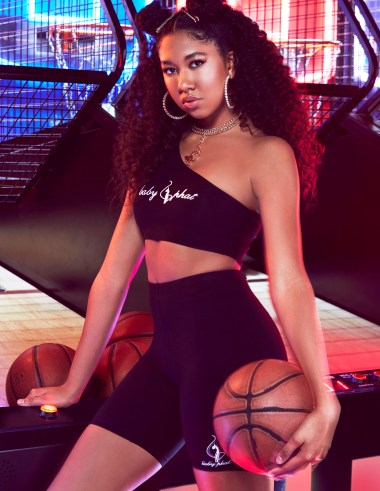 Aoki Lee Simmons in Baby Phat as the line reboots and bows with a Forever 21 summer capsule.