The New York catwalks showed lots of leg, and with it lots of legwear to keep limbs cozy and in style when the summer heat turns to an autumn chill. Opaque hose, footless tights, knee-highs, thigh-highs, legwarmers and sometimes a layered look of many...

By Jennifer Hirshlag and Sophia Chabbott on May 15, 2006
View Slideshow 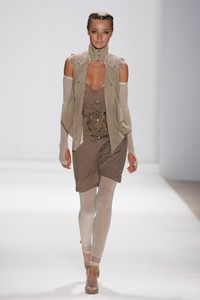 The New York catwalks showed lots of leg, and with it lots of legwear to keep limbs cozy and in style when the summer heat turns to an autumn chill. Opaque hose, footless tights, knee-highs, thigh-highs, legwarmers and sometimes a layered look of many of these silhouettes were seen on models strutting down the runways, marking a transition from seasons past when the bare leg was de rigueur.

“We are having a leg show right now,” said Catrinel Popa, vice president of merchandising and design at Kayser-Roth Corp., which includes the Hue and No Nonsense brands and which provided hosiery during fashion week for Nanette Lepore, Cynthia Rowley, Yeohlee and Tracy Reese. “There are lots of trends, and not all of them are going to filter into the mainstream, but I think young women are experimenting with legwear and when they see it in the magazines and on the runways, their eyes get used to it and absorb it and, in the end, it becomes more desirable.”

Popa said opaque hose in heavy weights like a cotton and microfiber version Hue is creating for its Black Label line, as well as footless tights are key trends to emerge from the runways.

Colors, she said, are primarily dark, including blacks, browns, grays, bottle greens, plums or violets, but she added brights like a fire engine red or royal blue are updating the nudes prevalent in the sheers of previous seasons.

For novelty, Popa said openwork lace effects on tights and bold patterns are emerging as directional.

Wayne Lederman, president of Leg Resource, which produces legwear under license for Anne Klein and Via Spiga, as well as several private label brands, said the focus on legs for fall could lure customers back into shopping for hosiery.

Overall sales of legwear, including socks, sheer hosiery and tights, fell 5.3 percent for the year ended Aug. 31, according to NPD Group, a research firm based in Port Washington, N.Y. The sheer hosiery category plummeted 15.6 percent to slightly more than $1 billion, while tights slipped 13.6 percent to just under $113 million. The sock segment was the bright light, with sales up 3.5 percent to $1.6 billion.

“This will be a good thing if some of the trends take off,” said Lederman. “It will get women to start wearing legwear and hosiery and create a momentum that we didn’t have in the past.”

Lederman, like Popa, is hedging his bets that the footless tight will come into its own in the fall months.

“The capri pant has been so big and this is not a far stretch from that,” said Lederman. “It’s basic in nature, but it offers a new way of dressing.”

Ed Bucciarelli, president and chief executive officer of Henri Bendel, said the store has already seen its customers snapping up footless tights and leggings from brands like Alice + Olivia, Danskin and LaRok.

“Legwear has been selling well in the store for spring,” said Bucciarelli. “Leggings and footless tights in particular are perfect for the younger girl, who is picking them up to wear with short skirts and tunics with pumps. With so much legwear on the runway from the fall collections, we plan to evolve what we’re currently carrying to stay on trend.”

Bucciarelli specifically cited collections like Michael Kors and Marc Jacobs for ushering in chunky-knit socks, and, on the other end of the spectrum, Peter Som and Anna Sui for showing feminine, lacy hosiery.

Antwerp, Belgium-based luxury hosiery brand Wolford put its emphasis on rich jewel tones and metallics for its new partnership with Zac Posen that launched on the runway and will begin retailing in Wolford and Zac Posen boutiques in July. Wolford also has agreements with Missoni and Kenzo for hosiery collections.

“I am very pleased that the no-hose look has gone away,” said Holger Dahmen, Wolford’s ceo. “When we can spice up our brand with a new, young designer, it’s a win-win situation for everybody. It garners younger clients.”

Sharon Thorp, head designer for ETC Hosiery, which owns the misses’ ETC collection and the new Chinese Laundry line that is going after a more stylish customer, said it’s time for legwear to be presented as less of a necessity and more of a fashion statement. She added, however, that change may be slow in coming to the wider U.S. audience.

“Jewelry is a great accessory, and it’s unfortunate that legwear is not viewed the same way,” said Thorp. “But people are beginning to respond. What it comes down to is teaching the American consumer.”

Lederman of Leg Resource said retailers are already willing to give shoppers the opportunity to respond.

“A lot of retailers have jumped on the bandwagon to see if new looks will be valid going forward,” Lederman explained. “If they are, they will really take advantage of them for the third quarter.”

Carolina Herrera, who paired everything on the runway from day dresses to whisper-light evening gowns with Wolford’s chocolate brown ribbed tights, said she thinks the focus this season on hosiery is the ultimate culmination of fashion and function.

“I love stockings,” she said. “It’s better than bare legs in the middle of a winter day. It’s a good look.”

This article appeared in WWD Accessories Supplement, a special publication to WWD.