In 1973, the French fashion industry underwent a seismic shift. 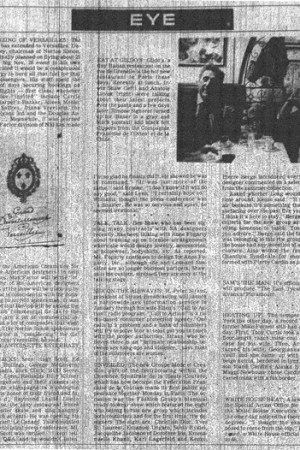 Today, all the attention is on Paris as the city opens its week of ready-to-wear collections. But before 1973, the glamour of couture often overshadowed the rtw designers. “When my models have been shown on TV, my name was not even mentioned,” said Sonia Rykiel at the time. “Invariably, the couture gets prime-time coverage with the couturier’s name announced with the models.” But in 1973, the French fashion industry underwent a seismic shift. And WWD was there.

“The French couture and rtw designers have effaced their snobisms and rivalries for a joint effort to push French fashion on the world market,” WWD wrote in an article on Oct. 11 that year. The Chambre Syndicale de la Haute Couture, which had been founded in 1868, spawned two new organizations — one for women’s rtw and another for men’s wear — thereby creating the French fashion industry’s new governing body, the Fédération Française de la Couture, du Prêt-à-Porter des Couturiers et des Créateurs de Mode. A new clique, the Groupe Mode et Creation, or GMC, was founded as well. The group was to use couture’s momentum to generate interest in Parisian rtw, and it included couture houses Christian Dior, Yves Saint Laurent and Emanuel Ungaro, as well as rtw designers Sonia Rykiel, Jacqueline Jacobson of Dorothee Bis, Emmanuelle Khanh, Karl Lagerfeld and Kenzo. “Everyone feels it’s the haute couture which introduces fashions,” said Jean St. Clair, a supporter of the rtw movement, “but fashion comes from ready-to-wear and our purpose is to make people aware of this.”

Looking at fashion today, it seems to have worked. Nearly 100 rtw designers will show in Paris for fall while the shrinking couture barely broke 20. Maybe now couture should push for something radical themselves.