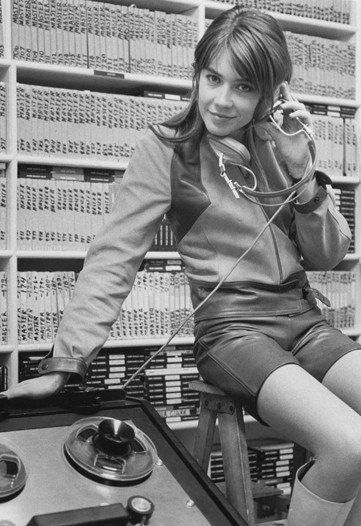 “The tall tall girl with long long hair and mini mini skirt.” This is how WWD described Françoise Hardy upon meeting the French folk-pop chanteuse in October 1966. Then 22 years old, Hardy had already sold 13 million records since bursting onto the scene at age 18, but seemed — in appearance and in conversation — very much a little girl, and very disenchanted with the biz. (She stopped touring just two years later.)

“She is not ‘hardy’ but rather shy,” WWD said of the singer and budding fashion plate-cum-icon. (Hardy was often photographed in Courrèges, Paco Rabanne and Yves Saint Laurent; Comme des Garçons’ Rei Kawakubo has cited one of Hardy’s early songs, “Tous les garçons et les filles,” as the inspiration for her collection’s name.) “Her answers are laconic. Have you already been to the States? ‘Yes.’ Where? ‘New York.’ Did you like it? ‘No.’ Why? Pouts, with a grumpy expression: ‘I had no time do anything else but work.’ What do you do when you’re not working? ‘Nothing….I don’t have time.’” And so on.

Hardy, who had established herself as a singer of yé-yé music, a style that emerged in early-Sixties Europe, was on the cusp of becoming a big-screen sensation — “Grand Prix,” the classic John Frankenheimer film (starring Yves Montand and James Garner), in which Hardy had a featured role, was about to premiere in the U.S. Aptly, WWD was trailing Hardy on a shopping trip, including to the house of Saint Laurent, to select some looks for upcoming promotional appearances, and for her impending Stateside blitz.

Chez Saint Laurent, Hardy decided on a black smoking (“It’s the first time that happened to me at a couture house…it’s wonderful,” exclaimed the singer upon learning the house had given her the piece), which she wore later that evening for a TV show. WWD then followed Hardy to the theater, where she was to tape her performance, noting the hordes of children awaiting her arrival: “Little girls and boys rush upon her, shouting, ‘Françoise! Françoise! An autograph! An autograph!’

“‘I have no pencil,’ she says quietly.

“The fans hold thousands of pencils, of notebooks, of small pieces of paper…the Idole gives some signatures.

“Do you like these demonstrations?” asked WWD. “‘Better than the contrary,’ is her answer.”