No need for velvet ropes. The entire crowd was VIP at the party Michael Findlay threw in honor of David Hockney in May of 1972 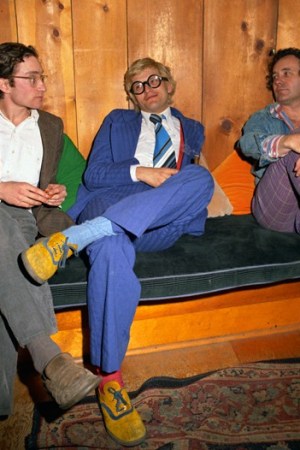 No need for velvet ropes. The entire crowd was VIP at the party Michael Findlay threw in honor of David Hockney in May of 1972. A key player in the Pop Art movement, Hockney drew an impressive crowd to Findlay’s three-story loft in SoHo. “It’s the crème de la crème of the Seventies scene if you ask me,” said filmmaker Joe Wemple. Hockney hadn’t visited America in two years. From behind his signature black-rimmed owl eyeglasses, he told WWD, “The last time, I came with Celia Birtwell and she kept saying how frumpy everyone looked.”

That wasn’t a problem at this particular fete. Model Naomi Sims, Findlay’s roommate, was stunning in Stephen Burrows’ long white crepe dress and Elsa Peretti’s ivory bracelets. “I just love the visuals of this party,” she said. And the very “visual” Pat Cleveland in a Licks belt and 7-inch platforms from Goody Two Shoes was there to start the dancing. Hockney, however, didn’t make it to the dance floor until nearly 3 a.m. “It’s been a fabulous party,” he said. “I’ve only met 10 people, but that’s 10 more than I knew when I arrived.”