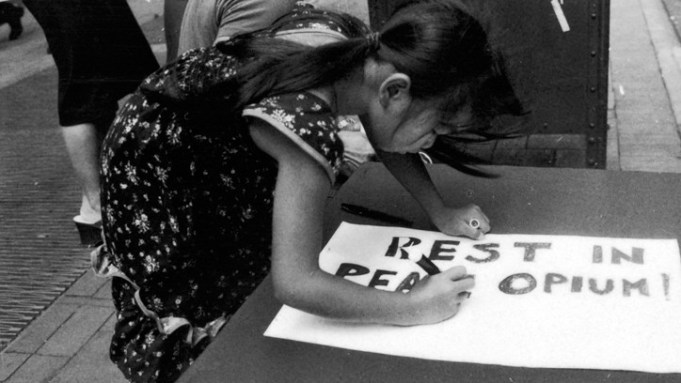 It’d be easy to think that the fashion industry has had just one controversy — fur. Witness the protests at DKNY, Carolina Herrera and Dennis Basso this week, not to mention at fashion shows throughout the decades. But civil disobedience and fashion have intersected more than once over the years, and WWD has been there to report on some of the more unusual conflicts.

Take the 1969 protest of the Miss America Pageant. Flocking to Atlantic City for the scoop, the media made the feminist group the YUKS (Young Unwashed Kids) out to be “bra burners,” a moniker that stuck for all posterity regardless of the fact that nothing was actually burned in the relatively peaceful demonstration. WWD was on the scene of the culture clash, reporting that a confused newsman at the scene asked some of the young revolutionaries, “How come some of the demonstrators are wearing bras, if they’re so set against them?” Crossed signals all around.

Yves Saint Laurent, not the patriarchy, was the target in September of 1994 when People for the Ethical Treatment of Animals staged a fur protest featuring a 20-foot-tall inflatable rodent outside Saks Fifth Avenue during a fete for its fragrance, Champagne.

But that wasn’t the first time a YSL fragrance elicited the ire of the moral elite. In 1979, Squibb Corp.’s board members seriously considered renaming YSL’s Opium fragrance after a midday protest nearly 100 strong stormed the streets in front of their office. Were they denouncing animal testing or some offensive advertisement? Not at all. The American Coalition Against Opium and Drug Abuse professed that the name glorified drug abuse and carried a racist connotation. While the majority of protestors were residents of Chinatown, the general consensus was that the fragrance title had a far-reaching negative impact.

“The black and Puerto Rican communities are being destroyed by drugs. We can’t afford to tell people Opium is chic,” said Franklin Williams, then chairman of the New York State Advisory Commission to the U.S. Civil Rights Commission.

Martin Schmidt, president of Squibb’s Charles of the Ritz Group Ltd., which distributed Opium at the time, noted that the slogan “Things go better with Coke” didn’t seem to bother anyone.

Stranger still, in a fur protest on the streets of New York, a woman dressed as a beaver was arrested for flinging horse excrement into the face of a police lieutenant during Fur Fashion Week in 1997. “We wanted Lagerfeld to know that fur stinks,” the protester expanded.