Back to Basics for Spring

Fashion was the driving force over the past few seasons, but a back-to-basics movement is surfacing in the lingerie business. 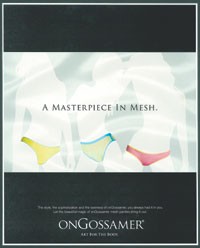 NEW YORK — Fashion was the driving force over the past several seasons in the lingerie business, but a back-to-basics movement is now surfacing.

Based on the trend direction of retail orders at the August market, a number of manufacturing executives from designer firms and moderate operations said the love affair with overtly embellished daywear, bras and panties, and sleepwear and robes, may be drawing to an end for spring.

While there continues to be a demand for luxe lingerie and designer labels, this newfound sobriety is the result of several negative factors that have affected mainstream America, according to industry executives. They include a huge demand for everyday basics following Hurricanes Katrina and Rita, skyrocketing costs of fuel, uncertainty over the Iraq war and the fear of a potential recession.

Another classification that’s reemerging as an important line of business is comfortwear — anything that features feel-good fabrics such as microfibers, cotton terry, softly brushed fleece and supple jerseys. The comfort issue, which became a tremendous factor in bolstering sales in the innerwear industry following 9/11, includes streamlined foundations with treatments like gel-coated bra straps, cushioned underwire bras and fabric blends like CoolMax that wick away moisture.

As a result, a majority of vendors focused on a broader range of replenishment items, many of which are top sellers, as well as a wider assortment of colors ranging from clear brights to soft pastels and neutrals.

“For us, August was all about basics,” said Francine Braun, president and chief executive officer of On Gossamer, a Miami-based company. “It was back to pants and our signature mesh. Overall, buyers were focusing on what they wanted to write and what they wanted to drive the business. What they wanted was color and clean lines and less fashion.”

“Overall, the whole knitwear part of our business was the biggest hit for the season, whether it was microfleece, Tencel, jersey or poly Modal,” Mitchell said. “It was clothes you could wear in or out. People are now coming into the sleepwear department with different expectations.

“We are doing a lot of business with replenishment items that we never did before. Retailers are interested in items they can continue to run and how they can maximize their business off of an item.”

“It’s all about the comfort factor,” Garfinkle said. “The Hide-A-Wire bra has a cushion feature on the underwire and is covered in foam. We’ve expanded the idea to include average-figure and full-figure styles. It’s rendered in a jacquard and solid fabric, so it’s also very eye-appealing.”

Regarding retailers’ buying priorities, Garfinkle said: “Retailers were only interested in something that had a new handle. They just wanted it to be salable, and by nature that eliminates overembellishment.”

“We also did a full-figure line expansion from our Wacoal Silver group called Halo, which features a more powerful lace and goes up to a triple D cup,” he said.

Regarding the licensed Donna Karan Intimates line, Vitale said, “We expanded the Donna Karan Solutions collection to nine silhouettes for spring. A bra that is totally backless and a plungy bustier each had very strong reaction, as did camis and chemises with convertible straps.”

Gail Epstein, president and creative director of Hanky Panky, said color and a soft, signature rose-pattern Helenca lace were the two most important elements for spring.

“I believe the younger customer appreciates this collection,” Epstein said. “She’s starting with a thong and now she can’t get enough of the lace. We have a continuing library of basics and the real excitement has been the infusion of bright colors in signature lace.”

She added that coordinating pieces like chemises, camis and calypso pants have been strong items. Color combinations include Creamsicle orange and pale green, flamingo pink and deep peony pink, bluebell blue and turquoise and clear aqua with cotton candy pink.

Chris Lee, vice president of design and merchandising at St. Eve, said the main goal on the part of buyers was “building basics within key fabrications and categories.”

“The hipkini is being added to programs as a fashion basic, along with cheekier boy-leg styles across all fabrics,” Lee said.

“Expanding into separates and traditional interlock was a top-selling idea,” said Thomas. “A customer may not want to plank down a lot of money for several separates, but she may be willing to spend for a pair of pajama pants. We also received strong reaction from CoolDry wicking fabrics, which we just renamed KN Cool.”

Leeds noted a licensed “Dukes of Hazzard” group also was a top-booking part of the Seventies statement.

“I think it’s because it represents a simpler time, no Al-Qaeda, no monumental problems,” Leeds said. “It reminds people about this guy driving this stupid car around the South with a Confederate flag and it makes people laugh.”