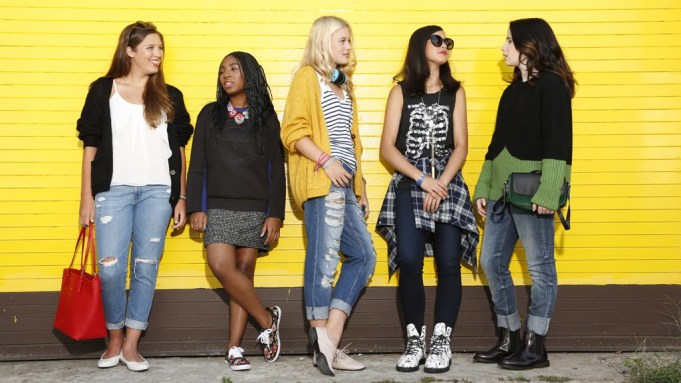 A congress of 10 teenage girls from 10 high schools in the greater New York City area yielded a remarkably consistent vision of what kids these days are wearing to school. There was age, dress code and personal taste to contend with but, for the most part, casual with a touch of street and grunge seemed to be driving the look.

The group WWD assembled for this story included girls in grades nine through 12 from a range of high schools — public, private and Catholic. Shot and interviewed in Williamsburg, Brooklyn, last week, each student was asked to bring an outfit emblematic of a potential first day of school look; each was also asked to choose items from the WWD racks around which senior market editor Mayte Allende would style an outfit. Jeans, sneakers and T-shirts dominated. And when asked for a list of favorite stores, the most common responses included Urban Outfitters, Brandy Melville, J. Crew, American Apparel and thrift and vintage shops. It was a relatively stylish group; the girls had clearly digested the street trends of the moment, if subconsciously, though those who considered themselves “into” fashion were in the minority. Only one student, Alexandra Rothenberg, a junior at Columbia Prep, mentioned following some of the top fashion blogs, including Garance Doré, Into the Gloss, Man Repeller and Fashion Toast.

Some have rigid dress codes to abide. For example, Strawberry Thomas, a senior at the Cristo Rey New York High School, wears a young version of business casual — a button-down shirt, blouse and slacks or a knee-length skirt — for her program, which requires students to participate in work study in an outside professional setting one day a week. Thomas has been working at Houlihan Lokey, an investment bank, since she was a freshman. She said her mother picks out most of her clothes, but for off hours, Thomas likes “urban street style,” she said. “I like Nineties style, too — the oversize jackets and harem pants. I could wear those all of the time.”

Davis Silver, a sophomore at Convent of the Sacred Heart, has the mostly traditional private-school uniform of a pleated kilt, though the school is fairly lenient when it comes to shirts and accessories. Sneakers are allowed and the shirts need only to fall within a certain color story. Off-duty, she strives to “keep it classy but at the same time try to be hipster.” Davis is thinking of investing in camouflage T-shirts for fall.

For the most part, the rest of the students professed that anything goes at school — within reason. “Reason” being nothing too short or too bare. “They definitely understand that the school has a very creative vibe so you can pretty much wear whatever you want,” said Tess Strohm, a sophomore in LaGuardia’s drama program. “People have shown up in all kinds of crazy stuff. People wear like baby-doll heads. My friend wears color contacts every day. They can do whatever they want, but you can’t wear a hat.” LaGuardia isn’t the only school that is otherwise liberal, except when it comes to hats. As Willa Decker-Lee, a senior at Bard High School in Queens, summarized her dress code: “People are really free to dress however they want. You can come in your underwear. As long as you don’t have a hat on, you’re fine.”

“I like to think that I’m a little bit like tomboyish and more causal. I wouldn’t say preppy. I really like J. Crew, COS, Topshop, Sandro and Vince.”

“I like combat boots, and I love, like, Sperry’s to wear with jeans. And skater skirts — I love those. And I’ve been collecting Alex and Ani bracelets.”

NEXT: Davis Silver, sophomore at Convent of the Sacred Heart, New York >>

“You have to wear this blue skirt [for a uniform]. During the winter you wear a dark gray skirt. You have to wear a black, red, white, navy or gray polo, but they’re pretty lenient about the colors. You can wear any shoes you want and sweaters can be any color you want. I wear kind of heavy and big sweaters because it’s comfortable but also because it looks cute. I’ll wear crazy socks with Supergas or Converse to try and express myself.”

“I really like black. It just suits me and I look good in it. I also like to wear short-sleeve, graphic T-shirts with skinny jeans. I just bought a pair of Dr. Martens boots and I really like those for a more grunge-ish kind of look.”

“We have a dress code, but the school doesn’t really follow it because there are, like, 4,000 kids in my school so they can’t really enforce it on everyone. They just don’t want anybody wearing anything too short when it’s hot outside. My style changes every day. Like, one day I might want to look punk-rock and do some dark makeup and wear all black. Today, I’m wearing all black. And usually I have sneakers on and wear a fancy necklace.”

“I definitely like to dress nicely because I think I always do better when I dress nicely. I like dresses because they’re much more comfortable than tight jeans. I wear combat boots more often than not. And black is my favorite color.”

“Every day we have to dress business casual, so there’s a strict dress code for the boys and for the girls.…I like to keep it classy. I dress my outfit up with different colored blazers. I don’t want to be out of dress code, but I try to change it up just a little, but not where I get detention or anything.”

“I bought this shirt from a thrift store. I liked the octopus, and the shorts are American Apparel that I found at Buffalo Exchange for, like, $15 — they’re really great high-waisted shorts. I love high-waisted everything because it’s very fun. I like fun socks, too.”

“This was my dad’s shirt when he went to California and drove there and came back. I like things that have a story.…I love to shop at Beacon’s Closet, I get most of my stuff there. I like Buffalo Exchange and this store called Trash and Vaudeville. Sometimes it’s a little too grunge and punk for me. I also go to Salvation Army and thrift stores.”

“I like to wear causal things. I don’t really like flowy dresses. On other people it’s nice, but not on me. I like to wear sneakers and jeans or shorts. Probably a plain shirt — not something that has mustaches or something on it.”