The first collection of lingerie bearing the Badgley Mischka Couture name will be launched for holiday. 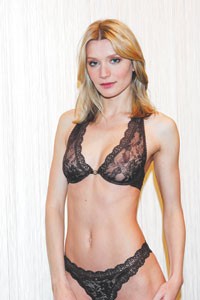 The first collection of lingerie bearing the Badgley Mischka Couture name will be launched for holiday.

The licensing deal with Ariela-Alpha International was coordinated by Badgley Mischka’s parent, the Iconix Brand Group, which started a number of licenses for Badgley Mischka last year, including fragrance, handbags, eyewear and cold-weather accessories. Daywear and sleepwear will be added next year, as well as a secondary lingerie label, Badgley Mischka Platinum.

The compact line of signature embroidered and beaded bras and coordinating undies will be a “natural progression for our couture clothes,” said Mark Badgley. “One problem was, customers would say, ‘Oh, my gosh, what do we wear under these clothes?’ It’s always been a big part of what we do and we’ve always been trying to build in the proper corsetry in our evening gowns, but it never worked, so we are launching this [intimates] collection. Our customer always loves beautiful underpinnings.”

Badgley noted that made-to-order bras and panties also would be available at major specialty retailers such as Neiman Marcus and Bergdorf Goodman.

Distribution is aimed at a select number of major department and specialty stores that sell Badgley Mischka ready-to-wear.

“The beauty in the collection is, it’s meant to be shown, not hidden,” James Mischka said. “It’s meant to interpret our product and enhance the evening gowns. The goal was to find the right undergarments to go with each gown. We didn’t treat it like a stepchild at all.”

First-year wholesale sales are projected at $3 million to $5 million, said Ariela Balk, president and chief executive officer of Ariela. Production is in China, but the embroideries and beading will be done in India.

“All of the patterns are different and all of the beading is done in India by men,” Balk said. “They don’t get to see the bras because they believe it would interfere with production. So the men don’t know what they are creating the patterns for.”

The collection, which will be expanded in spring 2008, consists of three groups of bras and panties: the Marlene Collection, a beaded group of Meryl and Lycra spandex in black, white, midnight blue and pale pink and blue; an embroidered group called the Sophia Collection in black, and the Veronica Collection of Chantilly lace edged in leavers lace in pale pink, olive, chocolate and black.

Bra styles include a deep plunge, a push-up number and a strapless style. Cup sizes start at 32A and go to 38D in select styles. Panty styles include thongs, bikinis, boy-legs and tangas in sizes S, M and L.

“They were very collaborative in the selection of fabrics, colors and bra styles, with plunge and deep V treatments for evening gowns,” Balk said. “And we put a lot more stretch in the panties to get an invisible look.”