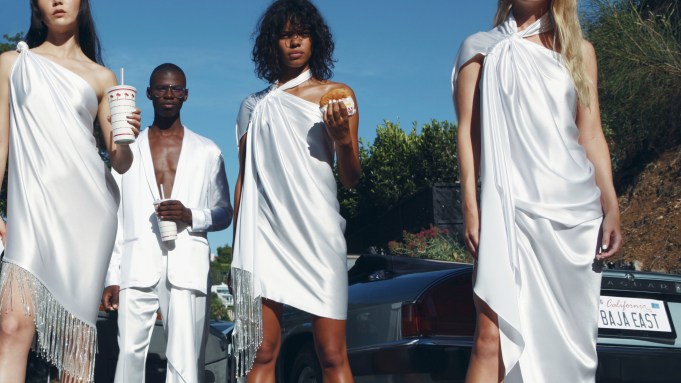 After a three-season hiatus, Baja East is heading back to New York Fashion Week on Sept. 7 — with fresh funding, a new advanced contemporary price point, an all-white capsule collection rolling out now, and a vision for spring 2020 that’s Los Angeles woo-woo in the best way.

“In spring 2019, I stopped production….It was a super dark time. I didn’t have any money; I was negative on all my bank accounts; I had credit card debt up my ass. I didn’t think it was going to get better,” said Scott Studenberg, who has been designing the brand as a solo act since 2017.

“I know this sounds strange, but I started wearing all white during the day. I was drawn to it, and things started to feel different,” he explained in the grand tradition of Seventies white robe-wearing boho cult The Source, and this summer’s resurgence of spiritual chic. “I didn’t have a spiritual teacher, I just focused on collecting myself and what I wanted to do. I’m not super religious, but I believe in energy and the universe.…Because I was leaving this toxic energy behind, I made room for new energy. Things I thought about started happening.”

It was during a New Year’s trip to Joshua Tree, among the “high vibes,” that he came up with the idea to relaunch the brand with an all-white capsule of favorite Baja East silhouettes — a satin raglan T-shirt and harem pants that can be worn with sneakers or heels; an oversize cotton poplin button-down shirt and jogger pants set that’s an update on pajama dressing; a billowy satin shirtdress that can be unbuttoned over Pilates-toned abs and palazzo pants; a comfy inside-out, oversize fleece sweatshirt dress that goes well with ribbed cotton harem pants for travel, or with cowboy boots for a night out, and an easy-elegant single-shoulder draped minidress with cascading crystal beaded fringe trim that’s a call back, perhaps, to the years Studenberg spent as sales director at Lanvin. (Divas and desertscapes — Tina Turner, Diana Ross and Joshua Tree — mingle on his mood boards.)

“I wanted to start with a clean, fresh palette and rebirth,” Studenberg said of the capsule (Select pieces are available on his web site now, with more to follow in the coming months.) He secured enough investment to set up a small team of five working out of his Buddha and sage-filled Laurel Canyon apartment where, yes, he can also read your tarot cards. “They believe in my vision and creativity,” he said of his backers, preferring to keep their names private.

In addition to the capsule, he’s launching a spring 2020 women’s collection inspired by Joshua Tree, with diamond-back rattlesnake, desert bloom, wild horse and crystal aura original prints, a stretch cotton knit sunset jaguar hoodie and dolphin shorts, and “high priestess” tarot card intarsia coatigan. “I want to do a tarot card on a tee or knitwear every season. It’s very me,” he said.

Studenberg and former partner John Targon originally launched Baja East in New York in 2013 with the concept of loose, luxury unisex wear, and moved it to L.A. in 2018. But they found the unisex concept a hard one to sell at retail, so he’s concentrating on women’s this season (though he’s still happy to wear the harem pants and oversize T-shirts himself).

He’s shifted the price points of the both lines to advanced contemporary, with a range of $125 to $1,295. “Being comfortable is sexy. I love the idea of bringing this kind of relaxed sophistication to this price point,” Studenberg said. “And the luxury stores don’t seem to care as long as it’s cool, they just want to sell product,” he added, noting Baja East will still sell at Maxfield, for example. “But once I get into sales in New York and Paris, I guess we’ll see.”

“Everything in white is just so pure, I didn’t think I would love it so much,” added the designer. “Spring 2020 is the opposite, bright colors and prints, but this was a great starting point for me to be inspired again. There is something beautiful about simplicity.”