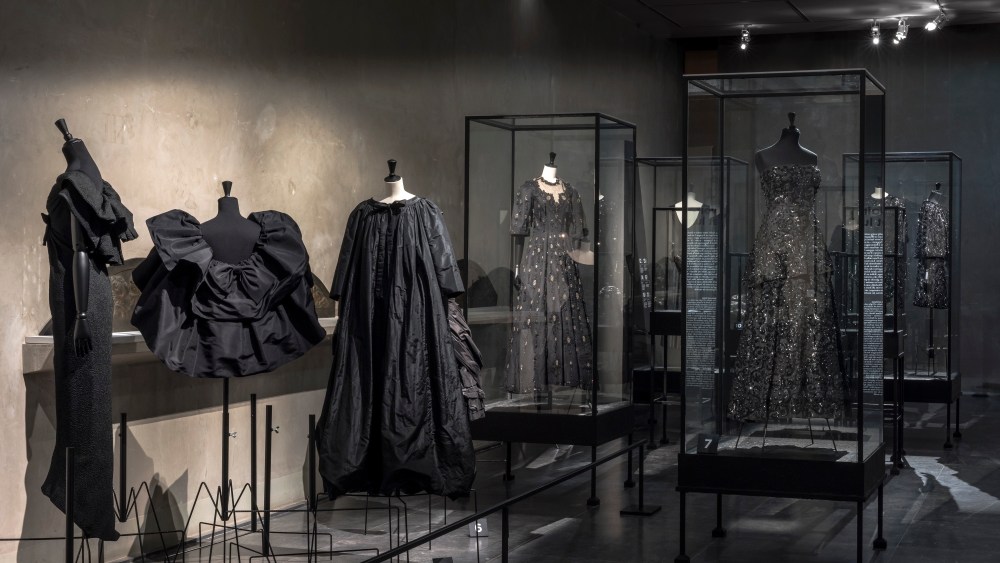 PARIS — Balenciaga is going back to black to celebrate the 100th anniversary of its founding.

“Balenciaga: Working in Black,” an exhibition of all-noir clothes designed by its founder Cristóbal Balenciaga, opens at the Musée Bourdelle sculpture museum today, part of a trio of Spanish-themed fashion exhibitions planned by Palais Galliera this year in various locales.

The Bourdelle showcase, scheduled to run until July 16, spans some 70 items from Galliera’s collection and the Balenciaga archive, including day clothes, accessories and eveningwear embellished with ribbons, jet beads, sequins and fringes. They date from 1938 to 1968, the year the couturier closed his house.

The absence of colors — save for the odd white fur collar or pink satin bow — trains the spotlight on the innovative shapes that Balenciaga pioneered, among them the barrel, balloon or sack. Other key styles on display include the semi-fitted, introduced in 1951, and the tunic dress from 1955.

Véronique Belloir, curator of haute couture collections at Palais Galliera, said the designer was influenced by the folklore and traditions of his Spanish childhood.

“Everyone says that Balenciaga was inspired by Spanish painters. He is Spanish, so like the Spanish painters, there is this duality in him between shadow and light,” she said during a preview of the exhibition.

“Balenciaga also had a very personal and distinct concept of feminine elegance and how to dress women. He used to say that he could dress any woman, and that you didn’t need to have an ideal body to be elegant,” she added.

The exhibition is divided into four sections. The first, “drafts and construction,” shows the way he would design clothes on dressmakers’ forms. This was generally done with a raw canvas toile, though the exhibition also shows examples of Balenciaga working off black fabrics during the preparatory stages.

The second section, “silhouettes and volumes,” focuses on the designer’s exacting tailoring skills and purist approach. Belloir said this section was notable for showing how Balenciaga played with fabric textures to achieve his desired effects.

“’Working in Black’ is, in a sense, about the transmutation of dark materials and textures chosen by Balenciaga into clothes,” she said. “He always selected materials very precisely and tried to tease the very best out of them. All of them react very differently to light and have different weights.”

Balenciaga worked with Swiss textile firm Abraham, which custom created fabrics like gazar just for him.

His experiments gradually led the designer toward ever more abstract shapes, such as a fall 1967 design consisting of four giant folds that engulfed the body, featured as part of a section highlighting sketches by Balenciaga and his studio, alongside photographic records of each design.

“At first glance, these designs can appear a little harsh, very sober, but they convey a subtle form of elegance and seduction. It’s not at all an obvious form of seduction, which to my mind is a very Spanish approach to things,” Belloir remarked.

“He wouldn’t necessarily put the accent on the waist or cleavage. Instead, he would add volume to the back, even though that might not appear like the most elegant thing to do. But he had such a sense of balance and proportion that all of a sudden, it gave off this amazing, regal sense of elegance,” she said.

The final two sections, “black and light” and “black and colors,” show how surface textures and color accents created three-dimensional volume on black clothes. Among the skills highlighted are embroideries by Lesage, Rébé or Métral, some of which are inspired by bullfighters’ ornate suits.

The Bourdelle museum was the site of a blockbuster Madame Grès exhibition in 2011. Balenciaga, like Grès, is considered a designer’s designer, with Christian Dior once saying: “Clothes were his religion.”

The subsequent Spanish-themed fashion exhibitions are “Clothes in Spanish Tones” at the Maison Victor Hugo next summer and “Mariano Fortuny” next fall at the Palais Galliera, permanent home of the City of Paris institution, whose director is Olivier Saillard.

Balenciaga continues to influence designers today, not least Demna Gvasalia, who is now the creative director of the house. As part of his fall ready-to-wear show on Sunday, Gvasalia showed nine dresses reinterpreting a selection of the shapes and volumes of the founder’s couture dresses based on in-house photographs.

The made-to-order dresses were either branded with the original BB house logo, or labeled on the back with the year, collection and garment description. Gvasalia added pockets to several of the gowns and paired some of them with oversized Bazar bags in matching couture fabrics.

Balenciaga parent Kering last September mounted a mini-retrospective in tandem with the opening of its new headquarters at the old Laennec hospital, installing 27 dresses by the Spanish master.

Gvasalia revealed at the time that he keeps a portrait of Balenciaga above his desk. “He watches over me but in a good way. It’s about respect,” he told WWD.