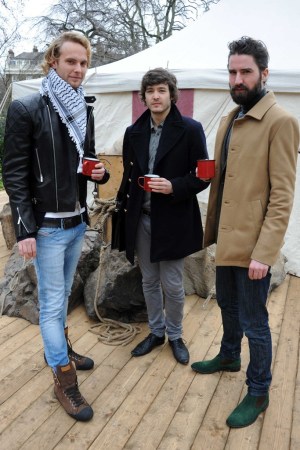 CLIMB EVERY MOUNTAIN: Sir Edmund Hillary and his 1953 ascent of Mount Everest was the inspiration for Bally’s Everest capsule collection of accessories. The presentation, marking the expedition’s 60th anniversary, was staged in an old-fashioned canvas tent pitched in London’s Bedford Square. Inside, there was a tableau of old-fashioned tea chests, camp beds, cameras, ham radios, and general expedition detritus on a glass case. The case itself contained a replica of Bally’s original reindeer fur hiking books worn by Hillary’s Sherpa, Tenzing Norgay, from which the capsule collection took its cue.

There were five different styles of boots — ranging from shaggy marmot fur and shaved reindeer for après ski to the more urban, Madison Avenue variety made from hand-burnished leather. There were also four styles of rugged man bags, fur mittens, and tracker hats lined with cashmere. Guests, including Benedict Cumberbatch, Jack Guinness, Sasha Bailey, Tony Ward, and Kayvan Novak were greeted with authentic Fifties mountaineering food and marmalade fingers wrapped in greaseproof paper. Sipping from a tin cup of coffee — served with Kendal Mint Cake and an optional shot of whisky — Cumberbatch talked about hiking in Nepal — and getting lost on a mountain.

“It was terrifying — we were lost for one and a half days,” he said. “We were doing it on the cheap, couldn’t afford a guide, and our maps were out of date. It was in the days before GPS really took off, and people were still frightened the Chinese were going to get hold of them and invade.”

His next conquest should be far less daunting — but just as interesting. Cumberbatch has just begun filming “The Man Who Sold the World,” in which he stars as WikiLeaks founder Julian Assange.