Backed by the Backstreet Boys — who performed live — the much-hyped H&M and Olivier Rousteing collaboration was fun and affordable, but hardly original.

By Jessica Iredale and Erik Maza and Taylor Harris on October 20, 2015
View Slideshow 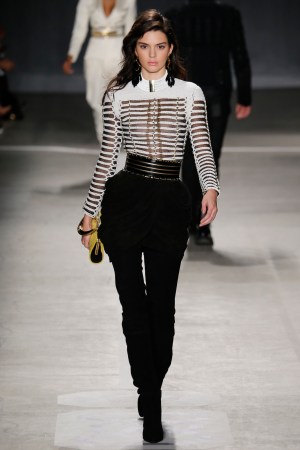 The Balmain x H&M fashion show held Tuesday at 23 Wall Street in New York, the disemboweled raw space where Proenza Schouler and Hood by Air have staged runway shows, did the unthinkable: It made lyrics from a Backstreet Boys’ song, performed live by the boy (man) band, feel philosophical. “Am I original? Am I the only one? Am I sexual? Am I everything you need?” sang Nick Carter and crew as they performed to close the much-hyped show. In the song, “Everybody” (1997), each question is answered with a chorus of “yeah,” but one felt like muttering “nah” in regard to the show.

It was a major production — one that has been immensely hyped through all social media channels, generations of Kardashians/Jenners, mainstream media and the mega-marketing bucks of a retail behemoth — but it was not original, particularly sexual or the only one of its kind. It was, in fact, an imitation. Deliberately so, as all H&M designer collaborations are imitations of the collections by the brands with which they collaborate.

To seriously review the clothes here seems moot as H&M released the look book a week ago and the clothes were nearly exact replicas of pieces — genie pants, pearl-embroidered blazers, tailoring with gold buttons, and blazers and blouses with ostentatious shoulders — Olivier Rousteing has put on the real Balmain runway in seasons past. Here, they were done in more affordable fabrics, which seemed highly logical for Rousteing’s genre of fun for a night or two. These are not forever clothes, and the cost per wear is much easier to rationalize on the H&M level.

The whole enterprise, from the show-opener video featuring Kendall Jenner, apparently forced to take mass transit — a futuristic subway — and watch various sets of twins engage in stylish dance-offs,  to the double-jointed dancers that periodically performed during the show to the clothes, was extremely nostalgic for the early Nineties. Fans of Prince might draw a connection to his 1991 album “Diamonds and Pearls,” featuring “twin” dancers Diamond and Pearl. Asking questions about the stylistic value of a Balmain x H&M collection is a rhetorical exercise, although the show and its marketing strategy did seem to answer the industry question about whether fashion shows should be consumer events: In this case, yeah.

Of course, Rousteing drew a gaggle of “It” girls to his front row, including Kylie Jenner, Jessica Hart, Martha Hunt and Diane Kruger. The Backstreet Boys’ appearance was orchestrated by the designer himself. “He’s a big fan,” Carter said after performing a three-song set that included “Everybody,” “Larger Than Life,” and “I Want It That Way” — all, by the way, the designer’s requests.

In turn, were the Boys familiar with Rousteing’s maximalist pop stylings? “Oh yeah, it was an honor to be here,” Carter continued. Indeed it must have been —  it’s been a while since the group of five, who hail from Orlando, Florida, coincided with the fashion world, and it might be some time before they meet again. After finishing a world tour, the most high-profile engagement listed on their official site is a European cruise next spring.

Before they posed for selfies with fans — everyone from Alexa Chung and Chelsea Leyland to street-style personality Di Mondo — Carter was asked about the hashtag used to promote the event: #hmbalmaination. What, pray tell, is Balmain nation? A democracy? A principality occupied only by those with more than a million followers on Instagram?

“It’s nice to be part of something so powerful and elegant and something that actually stands for something,” Carter said with the sincerity of a fashion outsider. If he couldn’t quite put his finger on the founding principles of #hmbalmaination, the competitive post-show shopping scene painted a clear picture of its constitution of conspicuous consumption.

“They’re like cheetahs. It’s worse than Black Friday,” said one shopper of the pop-up battleground. In the center of it stood Rousteing, pleased with his disciples’ conduct.  “I’m so happy. I’m so proud. It’s like a big achievement as a designer and as a person,” he said with Napoleonic conviction. “Tonight is just the pop-up store. On Nov. 5, it’ll be available to the whole world. This is just the beginning.”