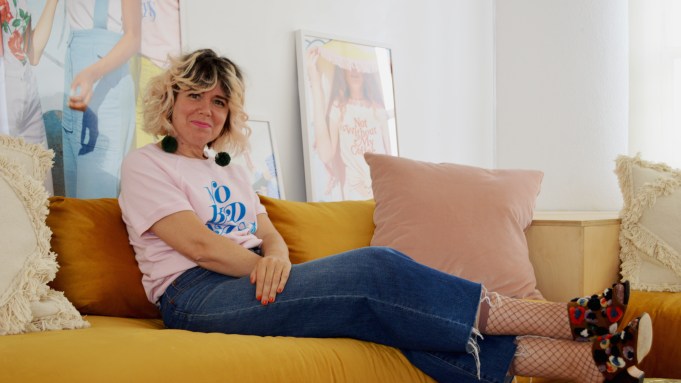 It all started for Ban.do with handmade flower crowns.

The brainchild of creative director Jen Gotch and Jamie Coulter has evolved into a lifestyle brand fueled with a dreamy, vintage aesthetic mixed with a little bit of quirk. Its tag line, after all, is, “We’re serious about fun.”

The Los Angeles company’s most recent push has been into apparel,with graphic T-shirts, short-sleeved sweatshirts and bombers bearing sayings such as “No Bad Days” and “Not Without My Coffee” selling for $38 to $128. That line joins the company’s recognizable notebooks, organizers, travel mugs, phone cases and other items sold in places such as Anthropologie, Macy’s and Nordstrom. There’s also a recently launched handbag line featuring circular designs using materials such as suede and pebbled leatherette.

“It’s so exciting what the potential is [with apparel] and how we’re able to connect with people in a way that is just harder to do with some of the other products,” Gotch said. “It’s doing this really interesting thing because I don’t think of us as a fashion brand. That’s not really where I’m coming from. I think of this as more of a lifestyle thing. The apparel speaks to the bags and speaks to the gift, but not in a matchy-matchy way.”

Ban.do (pronounced bandeau, the French word for hair band) started in 2008. The founders largely bootstrapped themselves and took on a modest angel investment of $40,000 before selling to Lifeguard Press in 2012. Coulter and Gotch knew each other from shoots. Coulter was a wardrobe stylist and Gotch worked on props and set design. Each had made flower crowns for separate clients and when both saw interest from others in them, decided to go into business together selling one-of-a-kind, handmade flower crowns retailing for between $95 and $500.

“It was a much different product assortment [than today],” Gotch said of the crowns. “But the brand was based on our sensibility and our personalities and that hasn’t changed so there’s a through line.”

Ban.do has since swelled to an Instagram following of some 475,000, with Gotch’s personal account commanding about 164,000 followers and an L.A. office of about 40. There’s also a Kentucky office, where its parent is located, that handles distribution and customer service. Another outpost in London has been established as the company eyes international growth, with announcements on global partnerships expected to be made later this year, Gotch said.

The company has its flagship e-commerce site where it sells some third-party product to fill in certain gaps in the lineup, such as Herbivore charcoal soap bars, confetti soap by Wary Meyers, Melissa Shoes slides and Marais mules.

Gotch, when asked if additional category expansion is in the works, is open to the idea, but said there’s still more to do on the apparel front as the company looks to release more outerwear, wovens, pants and is thinking about plus sizing.

“Before we go into more categories we want to get this one right and that’s going to take a while,” she said. “In the end, hopefully it looks seamless and easy, but there is a process and I think we’re a quarter of the way through it. What I have learned, because you can apply us to everything, you do a disservice to yourself and the brand if you try do everything….Gift is definitely our foundation. There’s an allure to apparel that’s a little bit different, but I don’t see apparel eclipsing [gift in terms of sales]. I also don’t know. If you would have asked me six years ago [about product expansion], I would have said maybe a phone case.”

The company considered a physical store most recently when it still had some time left on the lease of its last space behind the Chateau Marmont, which was zoned for retail. However, the executive team ultimately decided to funnel the company’s energy into the web site. Plus, the company’s office space will eventually be a place for community events such as speakers or business mentoring.

Gotch — who operates off the idea of “dare to be different” — said anything Ban.do does in the real world would need to make a splash.

“What everyone else is doing doesn’t appeal to me,” she said. “It’s about what can we do that isn’t what is already out there and so I feel like if and when — and I’m sure there will be a point where we open something that is for the public — it will be unlike anything else.”

Makers Mark: How Artisanal L.A. Is Helping Bring Lifestyle Back to Retail

Luxury Boutique The Kingdom to Open in Calabasas