Banana Republic emphasizes color and outerwear in its holiday collections for men and women.

By Jessica Iredale and Aria Hughes on July 8, 2015
View Slideshow 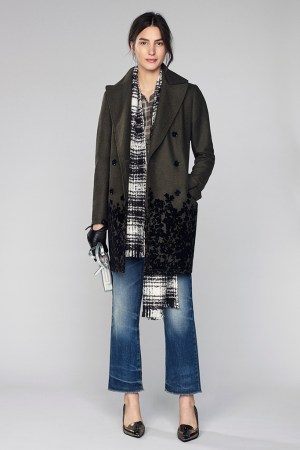 “It’s about elevating in general,” said Marissa Webb, Banana Republic’s creative director, during the company’s holiday preview. Nearly a month after parent company Gap Inc. outlined drastic strategic measures to turn around its ailing brands, the response was obvious in the holiday lineup, loosely inspired by the Scottish Highlands and Iceland. “It’s about focusing on Banana Republic’s heritage, getting back under it and building the fashion around it,” said Webb. “We’re really looking at quality, fits and color,” which were specifically called out as lacking by executives last month.

A strong outerwear focus was evident in tailored coats in plaids and Harris Tweeds that incorporated color — “the right colors, not just Skittles” said Webb — into the mix of knits, denim, faux fur and full skirts. Yellow, cobalt, pink and red, registered in both the ready-to-wear and accessories, rounded out the traditional navy, black, camel and gray. The lineup reflected Webb’s more fashion-forward vision without abandoning Banana Republic’s mass core. She called out suiting, noting there’s a misconception that the company has ignored officewear, which has been a staple. “We haven’t walked away from suiting,” she said. “It’s about how you style it and wear it today.”

For men’s wear, senior vice president of design Michael Anderson focused on texture and showcased a collection that had a ski-lodge feel. Chunky knits were styled with suits and flannel shirts while coats featured Harris Tweed and faux-fur collars. An ath-leisure influence came through with jogger pants made from a Neoprenelike fabric and sleeveless bubble vests.

According to Anderson, men’s wear is doing well for Banana Republic and Webb has encouraged the team to embrace the brand’s heritage but also broaden the collection’s range. “We should never be too far away from being a utility brand, but we’ve tried to shift the focus to become more of a lifestyle brand,” said Anderson.

The men’s limited edition Harris Tweed collection includes a tailored coat, a blazer, a bomber jacket, a high-top sneaker, a portfolio case, a trapper and a mixed media leather glove. The line will be available for holiday at select retail locations and is priced from $120 to $798.

“We keep hearing that the customer wants novelty and they want special product and one of our mantras is to offer it,” said Anderson.