By Aria Hughes and Andrew Shang on July 19, 2016
View Slideshow 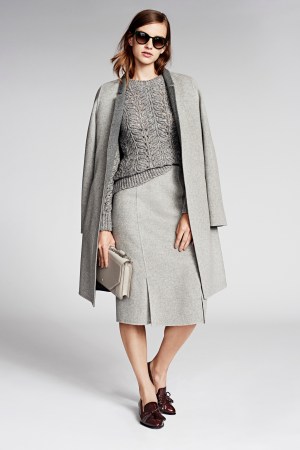 A trip to the Pacific Northwest informed Banana Republic’s men’s and women’s holiday collection, which focused on elevating everyday staples.

The women’s collection showcased a play on textures and the tension between hard and soft. For example, slinky smooth slipdresses were layered over nubby knits and crisp tailoring with men’s wear influences, which were a big push this season, juxtaposed against much softer, fluid silhouettes. A wrap jacket with waist tie was a modern take on a blazer; an ombré peacoat was paired down with a shimmery knit and slim, flared jeans; a utility coat with a nod to military was styled with a feminine wildflower-print dress. Even a men’s style flight jacket was updated with a dramatic collar and made from a light pink twill. The lineup felt considerably more luxe with its elevated tailoring and generous use of faux fur in both outerwear and accessories. Perhaps it stood out because of its unassuming casualness among statement coats, but a black puffer felt young, refreshing and very cool.

On the men’s side, Michael Anderson, Banana Republic’s senior vice president of design, said the goal was to create clothes that make the consumer’s life easier. Banana Republic did this by producing traditional tailored pieces and updating them with performance details — he called the look the “new sartorial.”

“This ability to dress up in a new way feels relevant right now,” said Anderson when asked why the brand was shifting toward tailored when the current craze in men’s is about ath-leisure.

A classic tuxedo featured a plaid print, and a sporty bomber was covered in a traditional windowpane pattern. Outerwear was either technical or tailored and ranged from a parka that could be worn three ways or a tailored overcoat with pronounced shoulders. Pleated pants had a slim silhouette. Knits included turtlenecks, which Anderson said are beginning to trend with the Banana Republic shopper, along with a chunky sweater that could be worn alone or attached to a quilted jacket. A standout look that best personified the brand’s smart mix of tailored and sporty included an overcoat worn over a blazer and a knit hoodie that was paired with slim, bouclé tweed trousers.