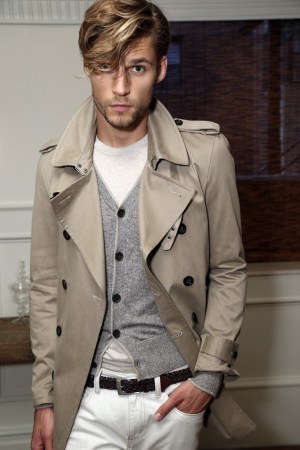 California, specifically “Sonoma desert colors” influenced Banana Republic’s spring collection, according to acting head of woman’s design Melloney Birkett, who is in the lead design role after the company announced Simon Kneen will be leaving at the end of 2013. Some desert landscape colors could be seen in sandy coral and stoney khaki but the clothes were really about Banana Republic basics — trenches, silk blouses, chambray pants, a tennis dress or two — mixed up with current trends, such as leather. Standout pieces included a white perforated leather shift dress and a pair of white wide-leg pants with graphic navy trim.

Vice president of men’s design Michael Anderson translated the easy California inspiration into the men’s wear via an updated celebration of the brand’s heritage styles. There was an ultraskinny khaki suit in a cotton-and-spandex blend, a cropped two-ply cotton trenchcoat and a classic peacoat in a scubalike technical fabric.