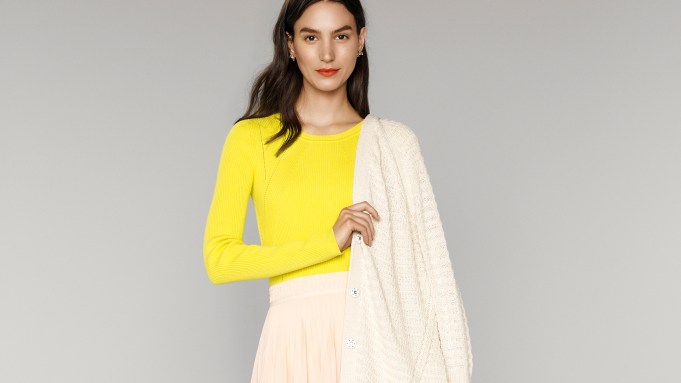 Michael Anderson, senior vice president of design for Banana Republic, took his design team on an inspiration trip to the South, stopping in Savannah, Ga., New Orleans and Nashville. “The South is known for color and prints and its joy of life, and also for dressing up a bit,” he said.

For the women’s looks, that feeling of optimism parlayed into feminine dresses in punchy floral prints, some finished with subtle sheer lace detailing, as well as tailored suiting. Graphic prints — like stripes and windowpane patterns seen on culottes, knits and trousers — made for a casual, sporty sophistication.

As for the men’s side, “There’s a sartorial elegance with some of the older guys in the region, but you are seeing it more with the younger kids, too,” Anderson said. Those references translated into a collection of easy pieces that were dressed up with softly tailored items. The linen crew neck T-shirt, which was a foundation piece in the assortment, was paired with linen and seersucker blazers, slim, tailored trousers and indigo shorts with pinstripes.

A plaid linen blazer that had a wool-like appearance was a standout. “Linen is a luxury yarn to buy,” Anderson said. “You have a short window to wear it, so we wanted to make it the best it can be.” Other fabric innovations came through in laser-printed shirts and slub cotton dip-dye sweaters.

Anderson told WWD that Marissa Webb’s departure from the brand — she formerly served as creative director and is now in an advisory role — hasn’t changed the direction of the men’s and women’s collections and he still works closely with her. “Marissa was great at making us think about the details,” he said. “She was always happy with how the men’s collection mined the brand’s heritage and integrated utility into the clothes, which is important because that’s a differentiator for us.”