Scott Sternberg used a young Mick Jagger as the inspiration for the collection. 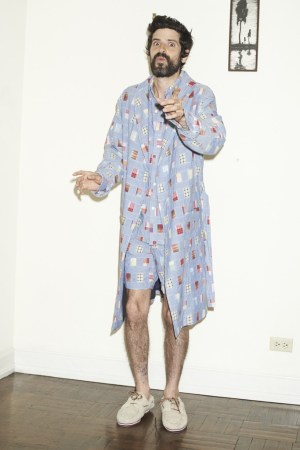 STRIKE UP THE BAND: What does a young rocker with cabin fever look like? Ask Scott Sternberg, who used a young Mick Jagger as the inspiration for Band of Outsiders’ spring 2014 men’s collection. “He was quite the prepster in the early Seventies,” said Sternberg. “I wanted to capture that cool, sexy, easy, youthful vibe, and I had this fantasy of what hotel living would be like for a guy like Mick Jagger.”

Sternberg then happened upon an image of a vintage matchbook from Chateau Marmont, and hatched the idea to stage the brand’s third live-streaming event — this time at the famed Hollywood hotel — in lieu of a runway presentation.

Musician Devendra Banhart was filmed “Big Brother”-style by multiple cameras positioned in Suite #29 as he changed into 21 looks over the course of one day. The real-life fashion show began with Banhart waking up on Sunday morning in a madras patchwork robe and shorts that stuck close to the company’s preppy DNA, as did other pieces like a three-piece linen tweed suit and a windowpane check short suit. There were some sly departures from the classics, such a tan leather hoodie and navy leather shrunken schoolboy blazer, a degraded denim suit and a gold nylon taffeta training suit. “You have to keep your references consistent to keep customers, but we also try to break the mold,” said Sternberg.