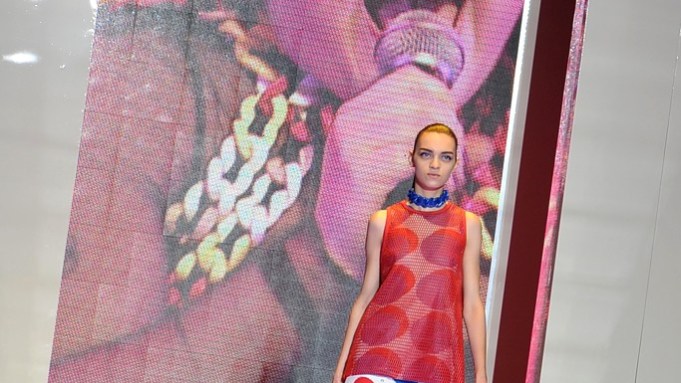 The spring runways rocked with a mix of live performances and booming soundtracks from the new to the nostalgic.

❂ Joseph Abboud asked composer Henri Scars Struck to create an electronic beat reminiscent of the Eighties, and Struck did it with an all-female orchestra.

❂ At Rebecca Minkoff, husband-and-wife duo Tennis performed three songs over and between five tracks spun by DJ Cassidy (whose noteworthy gigs include the recent Democratic National Convention and the wedding of Beyoncé and Jay Z).

❂ At Nanette Lepore, the musically diverse Brazilian Girls performed songs adapted to the inspiration of the show—which was delicate, museum-quality china and porcelain.

❂ Cyndi Lauper performed three songs, including “Girls Just Want To Have Fun,” at the start of Betsey Johnson’s show and “Happy Birthday” at the end to mark the designer’s 70th birthday.

❂ British singer-songwriter Kate Nash turned out three songs at Felder Felder, including a cover of “All Day and All of the Night” by The Kinks.

❂ Beth Ditto’s performance at Versus flashed on a wall behind the models’ runway entrance while the band played on the sidelines.

❂ Karl Lagerfeld imported the Chromatics from Portland, Ore., to play a mix of old and new tunes at Chanel—perched above a solar-panel runway overlooking 13 giant white wind turbines.