Banking on Newness to End Slump

The quest for fresh merchandise lead the action at the November market, as a way to counter the sluggish consumer purchasing. 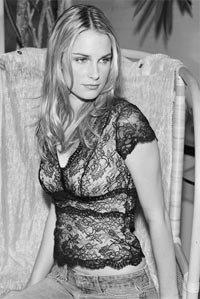 NEW YORK — The quest for fresh merchandise had a renewed vigor at the November market, as the sluggish economy continues to batter retail and wholesale businesses, and consumers hold on to their disposable income.

This story first appeared in the November 24, 2003 issue of WWD. Subscribe Today.

Retailers are continuing to cautiously analyze which lines of business for spring-summer can be expanded or discontinued. Merchants are looking for products, brands and items that will differentiate them from competitors.

But a lot of orders going into the transitional and early fall selling periods will depend on the results of business at stores between Thanksgiving and Christmas, a crucial time that typically is a barometer of consumer confidence.

Also adding to the anxiety is the move last week by the Bush administration to reimpose temporary quotas on bras, robes, dressing gowns and knits imported from China. For some makers, especially smaller and mid-size firms that have increased fashion offerings, as well as larger companies that have diversified sourcing and manufacturing in a variety of countries, it isn’t as much of an issue and could represent an opportunity, as opposed to the firms that source large programs of innerwear that could have to deal with reaching quota limits in the crucial fourth quarter.

Vendors generally said they were pleased with the turnout at this month’s market, citing visits from divisional merchandise managers and buyers with whom they’ve tried in vain to get an appointment in the past. Some vendors said they got their foot in the door with minimum test orders.

New, proprietary fabrics and finishes like Hollywood velour, an ultrasoft cotton velour for robes and loungewear by Anne Lewin at NAP.

Daywear and sleepwear rendered in high-shine satins and silks embellished with lace that have a glam retro look from Cinema Etoile.

Novelty stretch lace tops meant for the young, contemporary crowd, to be worn with jeans, by Leigh Bantivoglio.

Clever screen prints for camis and panties such as “Toad You So” with a whimsical frog print at St. Eve International, and distressed, vintage-looking logos and sayings like “Love is the Answer” at Richard Leeds.

Sexy, unlined fishnet daywear pieces, including chemises, camis and boy-cut pants with bow motifs in hot pink on a black ground or a white ground by Hanky Panky.

The “value and beauty” cami in sleek nylon and Lycra spandex in jewel tones by Body Creations by Hanes Her Way.

Tracey Goodwin, president of the Hanes Her Way business at Sara Lee Intimate Apparel, said, “Mass merchants previewed our Body Creations fall line and they won’t be making decisions for a couple of months. We think there is an opportunity in specialty looks at value prices. Mass marketers don’t expect to be regarded as a second option to department stores when it comes to fashion.”

Gail Epstein, design director and an owner of Hanky Panky, a fashion daywear and sleepwear resource, said a top-booking item has been a “French thong,” a front V-shaped style with a wide lace band in bright fashion colors.

“The big news, though, is a new packaging idea for up to three dozen thongs that can be wrapped like egg rolls in a clear box,” Epstein said. “The thongs come in many fashion colors.”

She said retailers like the gift-giving idea for a counter display next to registers.

“Some 33,000 units a week of Curvation bras have been selling this summer and fall,” said Anne Jardine, vice president and general manager of the Bestform, Curvation and mass private brands at VF Intimates. “It’s been interesting to see how Curvation has played out. It originally may have had a very African-American appeal because of our spokeswoman Queen Latifah and our lead model, but the overall reaction has reconfirmed for us the universal appeal of Queen Latifah and Curvation.”

The Curvation line launched in October 2002 for distribution to 2,900 Wal-Mart doors, and expanded to another 206 Wal-Mart Canada doors in October 2003. The full-figure brand will be distributed to 1,510 Kmart stores and 145 Shopko stores, she said. In addition to new styles, bra cup sizes have been expanded to 42DDD in select styles.

Victor Lee, president of NAP Inc., said, “For spring, a combination of Hollywood velours by Anne Lewin and honeycomb knits by Bill Blass have been booking very well. Key at Crabtree & Evelyn is the waffle-pattern terry spa robe and related classic knits. A piqué-back baby loop terry fabric by Anne Lewin continues to be very strong.

“Retailers are all looking to differentiate themselves from each other. They just don’t want the same old, same old anymore, and they are looking for new fabrics.”

Howard Radziminsky, senior vice president of sales and merchandising at Movie Star Inc., said, “In Cinema Etoile sleepwear, many key fashion items were well received, like polyester charmeuse in lime, fuchsia, black or ecru trimmed in contrasting lace. But a new lace-up padded cup lace chemise is our best-booking garment of the market.”

Also strong are bra camis, he said, which have been expanded to include stretch lace, a new cotton spandex style with a racer back, and a shiny, stretch satin spandex cami. A new cotton piqué fabric in the firm’s lifestyle loungewear line, Movie Star Knits, has also been strong.

‘“We also were pleased with renewed interest in traditional sleepwear in novelty brushed fabrics,” Demakos said. “Several brushed fabrics shipped this fall are retailing quite well. We introduced a new brushed wide rib and bouclé fabric. Our best group is a lace-and velvet-trimmed group of brushed cotton that has an antique feel.”

Marcia Leeds of the Leeds firm noted that reaction has been strong to character prints of Tinkerbell, Mickey Mouse and Betty Boop that are “more mixed media, with distressed-looking screen- prints that are more embellished with beading, sparkles and tack-ons.”

Li said she will be introducing a sportswear line for fall 2004 and will expand a home accessories line of items including hand-painted pillows and photo album covers.

“My signature stretch laces continue to sell well, but it’s my new silk with lace looks that are selling out,” said designer Leigh Bantivoglio, of her eponymous brand.

“Retailers are searching for the look of satin and appliqué lace,” she said. “There’s a lot of private label silk in the market, but I’ve worked really hard to get the right prices that are competitive. My full silk slips retail for $195, short slips are $165 and camis are $155 and $165.”