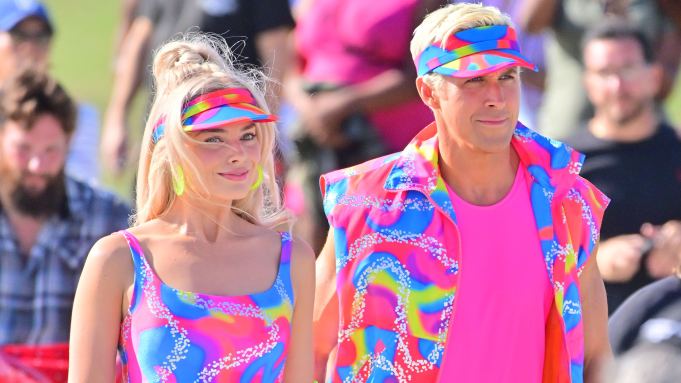 While the Mattel doll has had many iterations over the past 63 years, and had her ups and downs in pop culture, her popularity has been surging this year, and Barbiecore style is everywhere.

Barbie’s latest ascent coincides with the filming of a “Barbie” movie, starring Margot Robbie as Barbie, and Ryan Gosling as Barbie’s boyfriend, Ken, set to be released in summer 2023. But Barbie-themed fashion is here now — exemplified by all things pink — and has consumers looking at Barbie in a new light.

The word Barbiecore has raked in 17.8 million views to date on TikTok, and at fashion marketplace ShopStyle, pink is soaring in popularity, with searches for the shade up by 66 percent for pencil skirts, 44 percent for dresses, 31 percent for suits and 35 percent for bikinis.

Brands and retailers alike are embracing pink, just in time further fueling for the trend’s ascent.

For Valentino’s fall 2022 show, designer Pierpaolo Piccioli designed his own shade of the camp color with Pantone, naming it “Pink PP.”

Anne Hathaway was in sky high platforms; Ariana DeBose wore a matching minidress with block heels, while Florence Pugh’s was in a sheer dress that went viral.

“Pink has been given an updated fashion edge, and any bimbo connotations are very much in the past,” said Heather Gramston, head of womenswear at Browns in London.

“Social media and celebrity culture definitely have a part to play in the shade’s revamp, with the seal of approval from the style-set, meaning that pink no longer has these stereotypical implications,” she added.

Gramston said the store has picked up “some amazing styles in pink this season, across established and emerging brands.”

For resort, the retailer has bought pieces from Oceanus; Gimagaus, and Gauge81. The minimal, muted label The Frankie Shop has been dabbling in pink waters with an exclusive capsule collection in the intense hue, which will also be sold at Browns.

Also making Barbiecore happen is Warner Bros. Pictures, which is behind the live-action Barbie movie, with a screenplay by Greta Gerwig and Noah Baumbach.

Since Gerwig’s solo directorial debut in 2017 with “Lady Bird” she has received critical recognition for telling stories about women, and subverting the expectations of cinema-goers.

Robbie’s production company, LuckyChap Entertainment, which describes itself as a “female-focused film and television productions [company], will produce the Barbie film.

“Our goal is to be like, ‘Whatever you’re thinking, we’re going to give you something totally different — the thing you didn’t know you wanted,’” Robbie said in an interview with The Hollywood Reporter.

This year, the doll — who has been a lawyer, a surgeon and Queen Elizabeth II — is even exploring new careers.

“Kids need more role models like Dr. Goodall, because imagining they can be anything is just the beginning — seeing it makes all the difference,” said Lisa McKnight, executive vice president and global head of Barbie and dolls at Mattel.

Goodall is famed for her 60 year study of social and family interactions of wild chimpanzees.

The Goodall doll is Barbie’s latest step away from the traditional beauty standards she represented when she launched at the American Toy Fair in New York City in 1959.

With newfound popularity, and career opportunities ahead, there is no stopping the pink lady — or man. Daniel Craig’s pink Anderson & Sheppard jacket at the 2021 premiere of “No Time to Die” is still sparking demand among the brand’s customers for other pink items of clothing.

Barbiecore has trickled-up to Hollywood’s other leading men, too. “There’s always been a Ken inside of me. I’ve had this Ken-ergy, if you will,” Ryan Gosling said on the press tour for his new film “The Gray Man,” where he has been subtly wearing pink.